Army reservists hold rifles during training at a camp base in Taiwan on March 14, 2022.
Walid Berrazeg—SOPA Images/LightRocket/Getty Images
By Natalie Tso/Taipei

Eric Chung has been following the brutal war in Ukraine with apprehension. “I didn’t think Russia would invade, but they did, so China could do the same. War has become a reality for us,” the 27-year-old engineer says.

Chung has completed the four-month military service required of all Taiwanese men, but he says he doesn’t feel fully prepared for combat if he is called up. For Chung and the other young men who make up the island’s 1.65 million-strong military reserve, the conflict in Ukraine is prompting soul searching about how they would react if faced with an invasion by a People’s Liberation Army that is far larger and better equipped than Taiwanese forces. ”We’re too small,” says 24-year old Jason Hsu. “China would win.”

The war in Ukraine has seen hundreds of thousands of Ukrainians in the military reserve called up to active duty, and tens of thousands of citizens join the Territorial Defense Force to resist the Russian invasion. Western military and intelligence experts, many of whom expected Ukraine to fall quickly under the might of the much larger and more heavily armed Russian military, have credited these forces with helping to slow the Russian advance.

Scenes of ordinary Ukrainians defending their homeland have awakened Taiwan’s own spirit of resistance; Taiwan is considering extending the length of military service, and calls have been rising for the government to train civilians. The geopolitical differences between Taiwan and Ukraine are extensive, but Taiwan has long lived under the threat of invasion by mainland China, which views the self-ruled democratic island of 24 million as a rogue province that must be reunited with the rest of the country—preferably peacefully, but by force if necessary.

READ MORE: The Ukrainian Citizens Volunteering to Defend Their Country From Russian Troops

Anti-tank fortifications from previous conflicts line the shore along a beach in Lieyu, an outlying island of Kinmen that is the closest point between Taiwan and China on Feb. 4, 2021.
An Rong Xu—Getty Images

“When the Ukraine war started, people in Taiwan were anxious, but now they’re inspired by Ukraine’s resistance,” says a junior officer in Taiwan’s Republic of China Armed Forces, who asked for anonymity because he is not authorized to speak to the media.

He adds that the war has helped Taiwan’s military leaders see the need to mobilize civilians. Taiwan has yet, however, to set up anything akin to Ukraine’s Territorial Defense Forces, which have organized militias and trained civilians since 2014. Mei-ling Yu, a 50-year old paralegal, hopes the government establishes such a force. “If all of us are trained and determined to protect our homeland, the PLA won’t be able to take over Taiwan,” she says. “Even if they invade, we’ll outnumber them.”

Enoch Wu, the founder of Forward Alliance, an NGO that trains civilians in medical skills needed in the event of disasters or military attack, says Taiwanese people have rushed to join in the wake of the invasion of Ukraine. The waiting list for the short workshop has grown to more than 1,000 people.

For now, though, the defense of Taiwan is up to the military and its reserves. Currently, Taiwan has 169,000 active-duty military personnel, according to the International Institute for Strategic Studies’ The Military Balance. That’s a figure dwarfed by the PLA’s 2-million-strong military. The PLA air force operates more than 2,400 combat-capable aircraft, including J-20 Mighty Dragon stealth fighter jets. Taiwan has 474 combat aircraft, and most of its fighter jets are decades old. China also boasts the world’s largest navy, including two aircraft carriers with a third on the way.

To bolster its defense forces, Taiwan has mandatory military service for men. But, the commitment is only four months—compared to 18 months in South Korea, and about two years in Israel and Singapore. “We only had basic training, but it wasn’t enough.” says Chung. “I’d like to have more training in combat skills and psychological warfare.”

The service was reduced from one year in 2013. Now that the Russian attack on Ukraine has people more worried about a cross-strait conflict, legislators are calling to change the service back to a year or longer. This month, a TVBS poll shows 78% of respondents support the idea, and 56% want to include women. “Four months is too short; that’s like summer camp,” says 28-year old Young Sun, who served for a year. “A year is sufficient, but China is so much stronger than us. We can only do our best to hold out.”

Hsu, who has completed his four-month service, doesn’t agree with extending the term. Instead, he says that Taiwan should improve the salaries of volunteer full-time military personnel.

Since transitioning to an all-volunteer active-duty force in 2018, Taiwan’s military has fallen short of its recruitment goals. Most Taiwanese don’t see the military as an attractive career—a common way to describe someone who has enlisted is, “he signed his life away.” The starting salary for an entry-level soldier is $1,235 per month, which is 18% less than the average salary of $1,500 on the island.

Ukrainian military volunteers seen lining up as they report to the Kyiv defense battalion to defend the capital city on March 4, 2022.
Mykhaylo Palinchak—SOPA Images/LightRocket/Getty Images

However, even if Taiwan’s military grows, most analysts say that the island would not be able to stop a full-scale invasion on its own—and Ukraine’s situation has sparked debate over whether anyone would come to Taiwan’s aid. Although the U.S. and allies have sent thousands of anti-tank and anti-aircraft missiles and other weapons to Ukraine, they have stayed out of the fighting, and rejected calls to set up a no-fly zone, which would bring U.S. and NATO aircraft into direct confrontation with Russian pilots. “The Ukrainian situation has taught us a lesson,” says Alexander Huang, a strategic and wargaming studies professor at Tamkang University in Taiwan. “Your friend may not be able to send military forces to fight for you or with you.” Former President Ma Ying-jeou, of the opposition Kuomintang Party, has publicly predicted that the U.S. would send weapons, but not troops to defend Taiwan.

Sun, too, worries that the U.S. would not come to Taiwan’s rescue. “I don’t think they’d sacrifice themselves for us.”

The U.S. has long held a policy of “strategic ambiguity” on how it would react if the mainland attacked Taiwan—a policy President Joe Biden’s Administration has continued. Despite this, the President vowed to defend Taiwan in response to questions last October, only for his team to walk those comments back. Japan and Australia have also increasingly signaled that they might become involved in a military conflict over Taiwan.

Wang Ting-Yu, the co-chair of the legislature’s Foreign Affairs and National Defense Committee, says that the U.S. should abandon this ambiguity. “The U.S. needs to tell Beijing that if it starts a war, it will pay a price it can’t afford,” he says.

However, war is far from certain for Taiwan. First, unlike Russia and Ukraine, Taiwan and mainland China don’t share a land border, and mounting an amphibious invasion across the 110-mile Taiwan Strait is a far more complex and costly task. Additionally, Taiwan occupies a unique role in the world—with more than 90% of the most advanced microchips being made on the island. An invasion that jeopardizes chip production would likely spark a massive global response.

READ MORE: Inside the Taiwan Firm That Makes the World’s Tech Run

Beijing has also sought to temper comparisons with Ukraine, with Qin Gang, the Chinese Ambassador to the U.S., writing in the Washington Post that the dispute over Taiwan is an “internal matter” for China. “The future of Taiwan lies in peaceful development of cross-Strait relations and the reunification of China. We are committed to peaceful reunification, but we also retain all options to curb “Taiwan independence.”

Huang says that unlike Russian President Vladimir Putin, Chinese President Xi Jinping prizes national stability, but “the long term risk will depend on Xi’s mindset on his legacy.” Xi has promised to complete Taiwan’s “reunification” with the mainland.

Still, the war in Ukraine, along with China’s increasingly aggressive stance has many Taiwanese people on edge, and thinking about what it would take to defend the island. PLA warplanes dramatically stepped up their incursions into Taiwanese airspace in the last 18 months, with nearly 1,000 flights in 2021, according to Taiwan’s military.

In Taiwan, conscripts retire from the reserves at age 36, and volunteer soldiers are out at 45. Wang, the lawmaker, says men well past those ages have been calling his office to re-join. At a recent dinner Wang had with successful businessmen in their 50s, he says they all chimed in, “Don’t think we’re too old. Give us a chance. We want to be trained to defend our homeland!”

Wang adds: “This is unusual. Ten years ago, most people just wanted to make money and not provoke China. People in Taiwan have learned this spirit from the Ukrainians.”

Chung, the 27-year-old engineer, says he, too, would be proud to fight for Taiwan—despite reservations about his training. “Civilians in Ukraine have joined the war,” he says. “Their immense courage is inspiring. If a stranger came to our home, we would also fight to the end to protect it.” 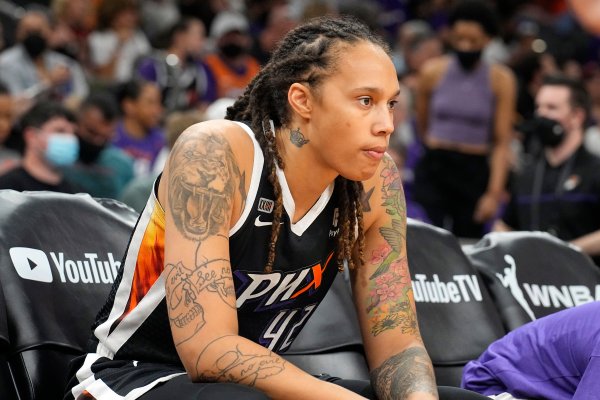 Spotlight or Silence? The Best Way to Help Brittney Griner
Next Up: Editor's Pick