She Blew the Whistle on Uber. Now She’s Releasing Fiction About Scammers and Strivers

Susan Rigetti is set to publish her debut novel, "Cover Story," on April 5.
Michelle Watt for TIME
By Annabel Gutterman

Is it possible to reinvent yourself? The question has been on Susan Rigetti’s mind since 2017. It was then that she, under her maiden name Susan Fowler, wrote a viral blog post that thrust her into the spotlight at just 25 years old. Titled “Reflecting on one very, very strange year at Uber,” the post described the rampant sexual harassment she experienced as an engineer at the ride-share company. It sparked a headline-grabbing internal investigation, led by former U.S. Attorney General Eric Holder, that underlined serious cultural problems at the company, leading to the eventual resignation of CEO Travis Kalanick. Susan Fowler became a household name, a leading figure in bringing the #MeToo movement to Silicon Valley, and the author of the critically acclaimed memoir Whistleblower, which told the full story of what she had endured.

“People told me many times, ‘If you say anything about this, you’ll never work in engineering again,’ ” she says, looking back on her decision to speak out. “So I said, ‘OK, I’ll have to start all over.’ ”

Read More: TIME’s Person of the Year 2017 Is the Silence Breakers

That new beginning includes the title she’s been waiting to claim most of her life: novelist. On April 5, as Rigetti, she’ll make her fiction debut with Cover Story—a frothy thriller that draws inspiration from scandalous headlines about other figures who have set out to reinvent themselves. The book chronicles the antics of Cat Wolff, a grifter making her way in the high-powered worlds of tech and media, who, with her ambiguous European background, hotel residence, and penchant for defrauding banks, is clearly modeled in part on Anna “Delvey” Sorokin. When Cat meets Lora, a naive Elle magazine intern who’s aching to become a writer and who has just lost her scholarship at New York University, the two immediately see each other as a means to their respective ends: Lora’s writing skills will help Cat produce fiction, and Cat’s name and standing in New York will help Lora get published and pay for school. At least that’s the plan Cat sells to Lora.

The result is a page-turner that’s hilarious in its dedication to vamping on viral news stories about real-life strivers and cons from Delvey to Instagram personality Caroline Calloway, whose former friend accused Calloway of exploiting her for her writing—a delicious read for anyone who, like Rigetti, perhaps ironically, can’t resist a scandal. “I wanted to write something that felt to read as it did to scroll through people’s social media posts, read all their blog stuff, and try to piece together this narrative of evidence,” she says. “I just want to gossip about the book with other people.”

Rigetti, now 30, is a self-described rule follower. She’s fascinated by the processes people follow to advance or change their lives. “I’m always trying to figure out how the world works,” she says. “You want to write a movie or a book—how do you do that? How do you get there? There are all these rules.” Her life before Uber was marked by hardship and a determination to succeed—she grew up in rural Arizona, one of seven children, with barely any formal education. But she always wanted to write. While her childhood and adolescence were full of painful setbacks due to her family’s financial situation, she was a hungry reader and taught herself what she needed to know to get into college. She learned the rules to get to where she wanted to be, and she followed them.

Which is why Rigetti has been fascinated with scammers for as long as she can remember. She loves the movie Catch Me if You Can. One of her favorite pastimes is plunging into internet holes about cons. “When I read about scammers, I have to know everything,” she says. “I can’t get enough of it.” She’s not alone: Inventing Anna, the Shonda Rhimes Netflix drama based on Sorokin’s story, and The Dropout, the Hulu series about Elizabeth Holmes and the lies on which she built Theranos, are two of the buzziest shows streaming right now—not to mention Showtime’s Super Pumped, which revisits the very story of what Rigetti experienced at Uber.

In Cat, Rigetti has constructed a character who learned the inner workings of powerful institutions, from venture-capital funds to fashion media, and understood how she could manipulate them to fund her lavish lifestyle. Lora is guided by the precedent that she’s seen play out in the movies: she got the dream internship, and she believes that if she works hard enough and makes the right connections, then everything else will fall into place. Once she meets Cat, Lora hangs on the dazzling woman’s every word—even when those words don’t really make sense, and even when they get Lora into trouble. It’s Lora’s drive to succeed, fueled by her insecurities about her humble Pennsylvania upbringing, that makes her so susceptible to Cat’s schemes.

Rigetti remembers what it was like to be Lora’s age and to feel like an outsider just trying to get her foot in the door. The bulk of the book is written in the form of Lora’s diary entries, and Rigetti turned to her own journals from her youth to sift through vulnerable moments and develop Lora’s voice. She noticed her younger self’s fixation on being taken seriously. “You’re looking around, trying to figure out: How on earth do I fit into this?” she recalls. “There’s that feeling of wanting so badly to prove yourself and to have the chance to claim your ambition without people thinking you’re getting ahead of yourself.”

As much as Rigetti identified with Lora, she also needed to understand Cat—this woman who’s fighting to keep her position in a moneyed world through lying, stealing, and adopting multiple identities. Rigetti had to ask herself: What makes a person choose that life? “Cat ends up doing terrible things, making a total mess of herself at a young age, piling on more and more until she’s in so deep that this is all she can do now,” she says. “She doesn’t see another way to live.”

After speaking out against Uber, Rigetti gave up her career in software engineering and pivoted, taking editing jobs at a startup and the New York Times. During that period, she found herself an object of interest, constantly confronted by people asking her how she viewed herself in the world. Writing the novel was her escape, a touchstone she’d turn to during lunch breaks and late at night. “The whole time I was working on this book, I was trying to figure out: Who am I?” she says.

For one, she’s the center of a family. She married her husband Chad Rigetti, the founder of a quantum computing company, in 2017, and they’ve since had two children. She tried her hand at editing and now is focused on writing her own stories, working on fiction and screenplays. And she’s made a point to have more fun. She uses the word more than 30 times in our conversation—fun is the backbone of the book, the sensibility that she was chasing while writing, and what she wants readers to experience while reading. Rigetti remembers, after coming up with the idea for Cover Story, how she pulled her husband out of his office to take a walk and explained the twisting plot to him—each tech-world detail a small joy. “I was telling him: It has PowerPoints! She’ll go to Y Combinator! There’ll be an article about her age to get on this ‘30 under 30’ list!” she says.

People familiar with Susan Fowler’s story might be surprised to hear she’s written a novel poking fun at both newsmaking scandals and the world she helped hold to account. But Rigetti refuses to let her past define her when she has so many other stories to tell and versions of herself to be. She doesn’t buy into the idea that each life has a single narrative or meaning. “The place where it’s interesting is what it takes to get from one stage of your life to another,” she says. “The trick is finding a way to prove to the world that you are capable of doing something new.” 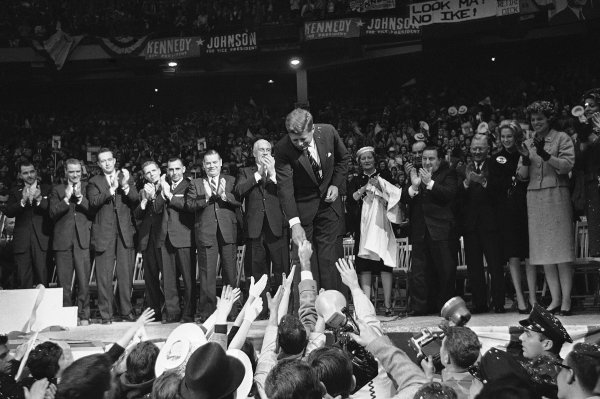 What the Kennedy's Immigration Story Tells Us About America
Next Up: Editor's Pick