Heat Pumps Are a Weapon in the E.U.’s Energy Face-Off With Russia

A heat pump is located next to a prefabricated house model from Helma-Eigenheimbau AG in Schkeuditz, Germany, on April 30 2019.
Jan Woitas/picture alliance—Getty Images
By Alejandro de la Garza

In the world of climate action, heat pumps often get short shrift. Used to heat or cool homes and buildings, the appliances aren’t flashy like EVs, and have none of the imposing presence of a wind turbine. They won’t turn heads in the neighborhood like rooftop solar panels. Instead, the squat square boxes attached to an outside wall or roof are about as impressive-looking as an AC unit.

But as Europe faces off against Russia over Vladimir Putin’s war of aggression in Ukraine, the lowly, unloved heat pump has become a crucial tool in Europe’s all-hands-on-deck effort to cut its dependency on Russian gas. The logic is that a campaign to switch European homes to heat pumps would be more effective in the longer term than simply asking citizens to turn down their thermostats, and work faster than building more infrastructure to import natural gas from abroad, while also helping to speed the bloc’s progress on its climate goals.

If the E.U. doubled installations in the next year, it could reduce the annual need for Russian gas by 1.5 billion cubic meters (bcm), according to the E.U. commission. That’s only a small part of the 155bcm that the continent imported from Russia last year. But it’s also a milestone for environmentalists who have long supported those little heat systems that could—with heat pumps gone from being an afterthought of the energy transition to a key piece of green weaponry in a geopolitical struggle between Russia and the West.

Currently, the E.U. relies on Russia for more than 40% of its natural gas, essential for fueling gas boilers that heat homes. That dependence has propped up Russia’s economy for decades, and also serves as Putin’s geopolitical ace in the hole—if Russia turns off the gas taps going into next winter, heating shortages could roll across the continent.

Following Russia’s invasion of Ukraine, leaders in the E.U. government and member states have—belatedly—decided it’s essential to get off Russian gas as soon as possible. Last week, the European Commission unveiled a new plan, termed REPowerEU, which E.U. climate chief Frans Timmermans says will give the bloc “much-needed room to maneuver” by cutting its dependence on Russian gas by two-thirds by the end of this year. Among the policies suggested—like speeding up renewable energy development and increasing imports of liquified natural gas from the U.S. and Qatar—was a role for the oft-overlooked heat pump: the commission wants to double the continent’s yearly heat pump installations, building out 10 million units within the next five years.

There are two crucial things to know about heat pumps: they use electricity instead of gas, and they’re extremely efficient. Conventional electric heating systems draw a lot of power from the grid—you can easily trip a circuit breaker if you plug in a space heater. A heat pump, on the other hand, doesn’t actually generate heat; it just moves it around. It uses the same principles as a refrigerator or an air conditioner, but runs backwards, with cold liquid refrigerant picking up heat energy from outside air, changing phase to gas, then releasing that energy inside and condensing back to liquid. Add that efficiency to the fact that every heat pump you install uses about half the energy of a gas boiler (even if the electricity it uses comes from a gas power plant), and you have a no-brainer device for climate action, and for prying off Russia’s vise grip over European energy supplies.

Jan Rosenow, European program director at the Regulatory Assistance Project, an NGO focused on advising governments in the energy transition, says doubling installations in the next year is an ambitious goal. European heat pump factories, though, might have trouble ramping up quickly, and a global semiconductor shortage could limit output as well (like most appliances, modern heat pumps are built with integrated computers).

Some observers have suggested that President Joe Biden could invoke the Defense Production Act to supply additional heat pumps to Europe. But U.S. systems might not be compatible with much of Europe’s building stock, since most American heat pumps are designed to work with air ducts built into the walls and ceilings of buildings, while European heat pumps tend to attach to systems that circulate hot water through radiators. Plus, E.U. lawmakers still have to actually implement policy to incentivize European homeowners and building operators to install more heat pumps—without which all those U.S. units would just stack up in warehouses from Brussels to Milan.

“The more realistic scenario is that we can double the deployment rate [of heat pumps] but not this year,” says Rosenow. “And then going forward, we need to [keep] growing a lot faster as well, and look beyond the immediate situation.” (He also notes that there’s been some confusion over the E.U.’s math—about 1.8 million units were installed in 2020, according to the International Energy Agency. Doubling that figure, even over the course of several years, should bring the E.U. to way more than 10 million new heat pumps total.)

With regard to the climate, many analysts say the new E.U. plan has a lot of moves in the right direction. It also helps that green technology has improved. “The heat pump market and energy efficiency market is mature,” says Lisa Fischer, a program director at climate think tank E3G. “That’s a pretty significant difference [from past energy shocks].” But Frida Kieninger, director of E.U. affairs at Food and Water Watch, says the plan could go farther to incentivize other efficiency measures, like programs to better insulate European homes which could also quickly cut emissions, and E.U. dependence on Russian gas.

Even with the big heat pump rollout and plans to import more natural gas from abroad, the E.U.’s new initiative still won’t fully free European countries from Russian gas within the next year, which is why they plan to fill up gas reserves before next winter to help blunt potential shocks or cutoffs. And some measures, like ramping up coal use and building new natural gas infrastructure, risk throwing green ambitions into disarray, as I wrote earlier this month. The reason Europe’s in this position, experts say, is largely because policymakers didn’t take seriously the need to roll out green technologies in recent years when they had the chance.

“The E.U. can’t change its lack of action in the past,” says Fischer. “Now it’s just cobbling together all sorts of actions hoping that the mix and match will be enough.” 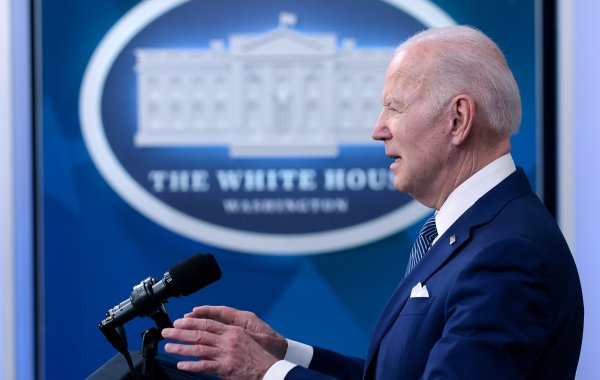 Why President Biden Banned Russian Oil
Next Up: Editor's Pick