The Federal Reserve raised interest rates by a quarter percentage point and signaled six more such hikes this year, launching a campaign to tackle the fastest inflation in four decades even as risks to economic growth mount.

Policy makers led by Chair Jerome Powell voted 8-1 to lift their key rate to a target range of 0.25% to 0.5%, the first increase since 2018, after two years of holding borrowing costs near zero to cushion the economy from the pandemic. St. Louis Fed President James Bullard dissented in favor of a half-point hike, the first vote against a decision since September 2020.

The hike is likely the first of several to come this year, as the Fed said it “anticipates that ongoing increases in the target range will be appropriate,” and Powell has pledged to be “nimble.”

In the Fed’s so-called dot plot, officials’ median projection was for the benchmark rate to end 2022 at about 1.9% — in line with traders’ bets but higher than previously anticipated — and then rise to about 2.8% in 2023. They estimated a 2.8% rate in 2024, the final year of the forecasts, which are subject to even more uncertainty than usual given Russia’s invasion of Ukraine and new Covid-19 lockdowns in China are buffeting the global economy.

“The invasion of Ukraine by Russia is causing tremendous human and economic hardship,” the Federal Open Market Committee said in a statement Wednesday following a two-day meeting in Washington, the first held in person—rather than via videoconference—since the pandemic began. “The implications for the U.S. economy are highly uncertain, but in the near term the invasion and related events are likely to create additional upward pressure on inflation and weigh on economic activity.”

The Fed said it would begin allowing its $8.9 trillion balance sheet to shrink at a “coming meeting” without elaborating. The purchases of Treasuries and mortgage-backed securities, which concluded this month, were intended to provide support to the economy during the Covid-19 crisis and shrinking the balance sheet accelerates the removal of that aid.

Powell, who is currently serving as chair pro-tempore as he awaits Senate confirmation for a second term, was due to hold a virtual press conference at 2:30 p.m. Washington time.

The Fed faces the arduous task of securing a soft landing for the world’s largest economy for the first time since the early 1990s. Tighten too slowly and it risks allowing inflation to run out of control, requiring even tougher action. Shift too quickly and the central bank could roil markets and tip the economy into recession.

Complicating the job: Russia’s invasion of Ukraine has sent the cost of fuel, food and metals racing even higher, raising fears of 1970s-style stagflation by posing threats to prices, growth and financial-market stability.

In new economic projections, Fed officials said they see inflation significantly higher than previously forecast, at 4.3% this year, but still coming down to 2.3% in 2024. The forecast for economic growth in 2022 was lowered to 2.8% from 4%, while unemployment projections were little changed.

The pivot to tighter monetary policy is sharper than policy makers expected just three months ago, when their median projection was for just three quarter-point rate increases this year.

Forcing the pace is a surge in inflation which has proved stronger and more sustained than anticipated. The consumer price index soared 7.9% in February, the most since 1982; the Fed’s 2% inflation target is based on a separate gauge, the personal consumption expenditures price index, which rose 6.1% in the 12 months through January.

The Fed previously held off from raising rates as officials bet the inflation shock would fade once the economy returned to normal following the pandemic recession and lockdowns, though they were also cautious amid new Covid-19 variants and data showing a choppy jobs recovery.

Instead, price gains accelerated amid a mixture of massive government stimulus, tightening labor markets, surging commodity costs and frayed supply chains. Powell has also been operating under a Fed policy framework, adopted in mid-2020, to allow some above-target inflation in the hope of broadening employment.

Critics say the Fed was too slow in changing course and is now behind the curve in taking on price gains that could become more entrenched if companies pass on elevated costs to consumers who react by demanding higher wages.

At the same time, the worsening inflation picture has handed Powell political cover to hike rates as he awaits Senate confirmation for a second term. American households and businesses have reacted with alarm to rising costs with retail gasoline surpassing $4 a gallon, though it could fall following the latest drop in crude oil.

Powell also bucked some calls for a larger half-point increase, which would have been the first since 2000. Some on Wall Street reckon it could deliver such a salvo in coming months if inflation doesn’t retreat.

On the positive side, American households are in an strong position with the unemployment rate at 3.8% and savings having risen throughout the pandemic.

Bloomberg Economics predicts the Fed could end up lifting rates to as high as 3.25% sometime next year, which would be the highest since 2008. Policy makers now see their longer-run federal funds rate at 2.4% versus 2.5% in the December forecast.

The Fed is not alone in turning more hawkish. The European Central Bank last week made a surprise announcement that it would be more aggressive in paring back bond-buying. The Bank of England is also set to lift rates on Thursday for a third straight meeting, while Brazil’s central bank is predicted to hike by another 100 basis points on Wednesday.

— With assistance from Jordan Yadoo and Liz Capo McCormick. 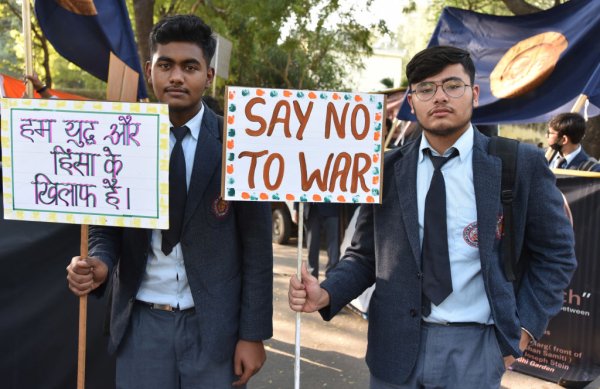 How Sanctions on Russia Will Hurt—and Help—Global Economies
Next Up: Editor's Pick