In a style part investigative journalism, part polemic, the video’s hosts report that one of President Vladimir Putin’s allies, Russian senator Valentina Matviyenko, owns a multimillion-dollar villa on the Italian seafront. The video contrasts the luxurious lifestyle of Matviyenko and her family with footage of dead Russian soldiers, and with images of Russian artillery hitting civilian apartment buildings in Ukraine. A voiceover calls the war “senseless” and “unimaginable.” A slide at the end urges Russians to head to squares in their cities to protest at specific dates and times. In less than a week, the video racked up more than 4 million views.

For Russians, Navalny’s YouTube channel is a key source of information that contradicts the Kremlin line. It has more than 6.4 million subscribers and is managed by a group of his allies under self-imposed exile in Lithuania. It is a thorn in the side of President Vladimir Putin, and a tonic for a country where TV news is dominated by the misleading narrative that Russia’s invasion of Ukraine is actually a peace-keeping exercise.

Despite this, YouTube has largely been spared from the Kremlin’s crackdown on American social media platforms since Russia invaded Ukraine nearly a month ago.

On Monday, a court in Moscow banned Instagram within Russia, labeling its parent company, Meta, an “extremist” organization. Earlier in March, Russia blocked Twitter and Facebook, too, after the platforms placed restrictions on Russian state-backed media. Instagram was used by over 50% of Russian internet users, according to data provided to TIME by market research firm eMarketer. The app had been a particular venue for activism: Many Russian celebrities spoke out against the invasion of Ukraine in their Instagram stories, and Navalny’s Instagram page posted a statement criticizing the war, and calling on Russians to come out in protest.

But YouTube, the most popular social media platform in Russia—used by more than 75% of the country’s internet users according to eMarketer—remains accessible, even though it is an even more popular outlet for opposition activists, and has leveled similar bans against Kremlin-funded media outlets. On March 11, YouTube’s parent company Google announced that it would block Russian state-backed media globally, including within Russia. The policy was an expansion of an earlier announcement that these channels would be blocked within the European Union. “Our Community Guidelines prohibit content denying, minimizing or trivializing well-documented violent events, and we remove content about Russia’s invasion in Ukraine that violates this policy,” Google said in a statement. “In line with that, effective immediately, we are also blocking YouTube channels associated with Russian state-funded media, globally.”

The move upended years of status quo. YouTube always had the option to ban Russian state media outlets, which would have cut the Kremlin adrift from some of its most effective tools for spreading disinformation both within Russia and in the outside world. But the platform faced a dilemma. Russia’s government had repeatedly indicated that it would retaliate against any bans of Kremlin-funded media by banning YouTube entirely within the country. That could leave many millions of Russians cut off from independent news and content shared by opposition activists like Navalny’s team. (It would also effectively delete 75 million YouTube users, or some 4% of the platform’s global total—representing a small but still-significant portion of Google’s overall profits.) What emerged was a compromise, of sorts: YouTube and other social media companies would allow RT and Sputnik to remain on their platforms, and Russia would allow sites like YouTube and Instagram to keep operating in Russia.

So after Google announced it was banning Kremlin-backed media on March 11, YouTube users in Russia braced for a retaliatory ban that would take YouTube offline. But such a ban has not yet materialized. Today, YouTube remains the most significant way for tens of millions of ordinary Russians to receive largely uncensored information from the outside world.

Members of the media take photographs of the screen showing Russian opposition politician Alexei Navalny at the penal colony during the trial in Pokrov, Vladimir region, Russia on Feb. 15, 2022.
Mikhail Svetlov—Getty Images

Part of the reason for YouTube’s survival amid the crackdown is its popularity, experts say. “YouTube is by far and away the most popular social media platform in Russia,” says Justin Sherman, a non-resident fellow at the Atlantic Council’s cyber statecraft initiative. The platform is even more popular than VK, the Russian-owned answer to Facebook. “When you’re talking about blocking something like Twitter, which is used by a far smaller, albeit influential subset of the Russian population, that’s a very, very different question to blocking access to the most popular internet platform in the entire country.” Twitter was used by 5% of Russia’s internet users before it was banned in the country, according to eMarketer.

Still, Sherman says the situation is volatile, with Russia now more likely than ever before to ban YouTube. For an authoritarian government like Russia’s, “part of the decision to allow a foreign platform in your country is that you get to use it to spread propaganda and disinformation, even if people use it to spread truth and organize against you,” he says. “If you start losing the ability to spread misinformation and propaganda, but people can still use it to spread truth and organize, then all of a sudden, you start wondering why you’re allowing that platform in your country in the first place.” YouTube did not respond to a request for comment.

Observers say that if Russia were to ban YouTube, it would be devastating for the country’s opposition movement. “YouTube especially has been really key for independent media and activists [in Russia] to publish their content,” says Natalia Krapiva, a Russian-speaking lawyer at the digital rights group Access Now. “It has been very influential to help people see the corruption of the government. If YouTube gets blocked, it’s going to be harder and harder for people to see that.”

On the same day as Navalny’s channel posted the video about Matviyenko, elsewhere on YouTube a very different spectacle was playing out. In a video posted to the channel of the Kremlin-funded media outlet RT, (formerly known as Russia Today,) a commentator dismissed evidence of Russian bombings of Ukrainian cities. She blamed “special forces of NATO countries” for allegedly faking images of bombed-out Ukrainian schools, kindergartens and other buildings.

The video, along with the rest of RT’s channel, has now been removed from YouTube. But until it was banned on March 11, RT’s channel boasted of being the “most watched news network on YouTube,” claiming to have 10 billion cumulative YouTube views. It had more than 4.7 million subscribers on its main channel, and millions more across a network of others.

Before they were banned from the platform, the YouTube channels of Kremlin-funded media were some of the most significant online distributors of Russian disinformation, according to Joan Donovan, an expert on disinformation at Harvard University’s Shorenstein Center. “YouTube has, over the years, been a really important place for spreading Russian propaganda,” Donovan said in an interview with TIME days before YouTube banned Russian state-backed media.

Despite its popularity, Google took only limited steps to tackle Russian state media before 2022, out of the belief that doing so would prompt retaliation that could impact its ability to remain a valuable tool for Russian civil society, says Sherman. But the company did bend to some international pressure. In 2018, YouTube started labeling videos from RT with a notice that they are “funded in whole or in part by the Russian government.”

Google complied, opening an office in Russia. Then, in September 2021, as protests mounted against electoral fraud in recent elections, a group of apparent agents, believed to be members of the Russian intelligence service, turned up at the house of Google’s most senior executive in Moscow, according to the Washington Post. The apparent agents reportedly demanded that Google take down an app designed by allies of imprisoned opposition leader Navalny to help coordination of protest voting. Within hours, Google removed the app from its app store. (Apple faced similar demands, and also removed the app from its app store.)

The heightened risk to free expression in Russia

Experts say that Russia’s ongoing crackdown on social media platforms heralds a significant shift in the shape of the Russian internet—and a potential end to the era where the Kremlin tolerated largely free expression on YouTube in return for access to a tool that allowed it to spread disinformation far and wide.

Russian Police officers detain a woman holding a poster that reads: "I do not want to kill anyone" during an unsanctioned protest rally against the military invasion on Ukraine, in Central Moscow, Russia on March,6,2022.
Konstantin Zavrazhin—Getty Images

The result, many fear, is a new system where the biggest losers will be the Russian opposition. “If Russians are cut off from access to YouTube, that would do enormous damage to Russian civil society,” Sherman says. “It would also push Russians more towards domestic platforms like VK, which are far more censored and far more surveilled by the Russian government than anything that the West is providing.”

The only hope that many activists have left is that, amid a surging anti-war movement, Putin may not want to take the risk of banning YouTube, the most popular service on the Russian internet. But even so, the public response to such a move would be difficult to predict. “Non-politically active people also use YouTube,” Krapiva says. “If they have these services taken away from them, they might turn against the government. Or they might turn against the West.” 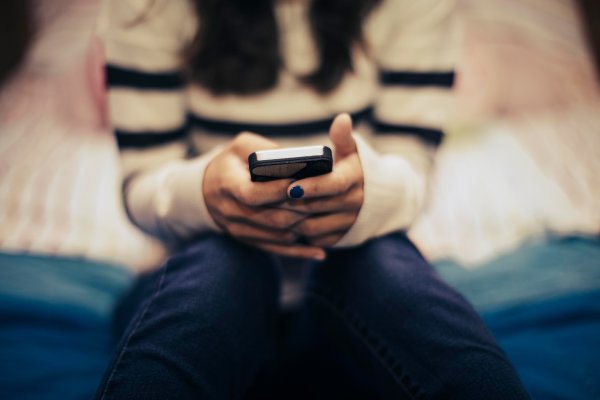 States Could Let Parents Sue Big Tech for Addicting Kids. Here’s What That Really Means.
Next Up: Editor's Pick