The Real History Behind the Game of Thrones "Ward" System

When it comes to last night’s episode of Game of Thrones, the grislier and more shocking moments — which you can read about in our spoiler-ific recap, if you so desire — will require a at least another episode or two to unravel. But when it comes to some of the background maneuvering, the best place to look for an explanation is the real past — not the show’s future.

The Westerosi practice of noble families taking “wards” has been a part of the drama since the beginning, illustrated particularly well by Theon Greyjoy’s place at Winterfell. He was a ward of the Starks — which means he was raised by the family sort of like a son but was, in actuality, a hostage.

Theon’s position with the Starks was highlighted again last night when Roose Bolton pointed out to his bastard Ramsay that Theon was a valuable hostage whereas “Reek,” Theon’s traumatized persona, was worth far less. Ramsay countered that Reek was at least loyal to the Boltons, and knew all about the Stark family from having spent time with them. In addition, Doran Martell reminded the Lannisters that Joffrey’s younger sister Myrcella is still a ward in Dorne. (Other Westerosi wards include Petyr Baelish, who was a ward of the Tully family, and — though it’s made a bigger deal of in the books than it is on TV — Ned Stark and Robert Baratheon, who became friends when they were wards together at the Eyrie.)

Today, we think of hostages as people who are taken by criminals to help them get what they want. It used to be, however, that hostages were given. (As a report in the International Review of the Red Cross points out, many linguists believe that the root of the word comes from the Latin hospes, as in to “host” a guest.) Adam J. Kosto’s book Hostages in the Middle Ages makes the distinction clear. If you imagine a Hollywood bank-robbery scenario with hostages, the hostage-takers are acting without the agreement of the hostages or some larger body that could agree on their behalf. In Westeros, as in much of history, the hostage situation is set up by mutual agreement between the ward’s family and the family that will raise the ward. The idea is that the ward will be treated as a noble guest and raised alongside the children of the house, but the ward’s family — typically the losers in a prior conflict, as when the Greyjoy family tried to fight King Robert — will also know that if they try anything fishy, the kid might end up dead. One of the most famous historical examples is William Marshal, one of the most famous knights in British history, who was a hostage with the King and nearly died sometime around the age of 5 when his father dared to rise against royalty.

The complicated meaning of being a ward explains Theon’s mixed feelings about the Stark family, who were both his captors and the friends of his youth. They could have killed him at any time because the Greyjoy family had been proved weak, but they treated him kindly as long as his father stayed in his place.

It also means that — though Theon’s winning the screen-time battle — Myrcella may be the ward to watch: as tensions between the Martells and the Lannisters continue to rise in King’s Landing, the offscreen princess may well be one of the most important pawns in play. 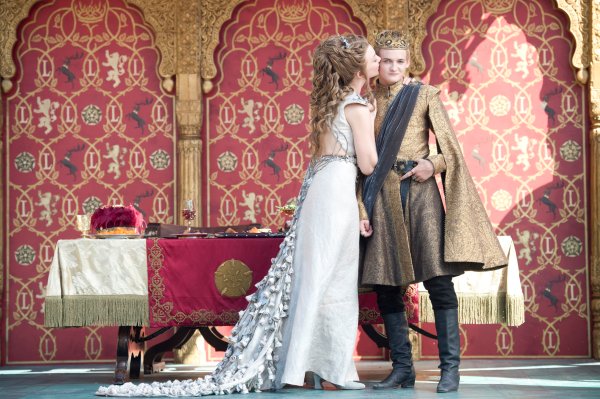 <i>Game of Thrones</i>: No Party Like a Westeros Party
Next Up: Editor's Pick