‘We Are Fighting for Survival.’ The Ukrainian Citizens Volunteering to Defend Their Country From Russian Troops

When Russia launched an attack on Ukraine, President Volodymyr Zelenskyy immediately vowed to arm any of the 43 million citizens who volunteered to defend the country.

While one million Ukranians have already fled to neighboring states for safety, others have enlisted in the Territorial Defense Forces (TDF), which organizes Ukraine’s militias. Some received combat training, with bank employees and teachers learning how to use AK-style assault rifles. Those who aren’t prepared for combat have taken on other tasks, like weaving camouflage nets to hide Ukrainian artillery from Russian reconnaissance. Some transformed their homes into makeshift sites for manufacturing molotov cocktails. Volunteers dug trenches and barricades to guard against attacks.

These concerted efforts have helped support the Ukrainian military, which has managed to defy the expectations of even Western military observers and slow the Russian advance. That is despite Moscow’s overwhelming advantage in the number of troops and military firepower. Olena Prokopenko, the co-chair of the Transatlantic Task Force of Ukraine and a German Marshall Fund visiting fellow, says the TDF is an “integral part” of the resistance and “significantly increases” Ukrainians’ chances of holding back Russia’s invasion.

Citizen resistance in Ukraine isn’t new. In 2014, an unprepared Ukraine had to rely on volunteer armed groups as Russian-backed separatists began breakaway campaigns in the eastern Donbas region, and Russian forces annexed the Crimean Peninsula. As Russia built up its forces near the Ukrainian border in 2021, the Ukrainian government passed a law legitimizing these ad hoc armed groups, making them an official part of national defense.

The government in Kyiv launched the TDF earlier this year, comprising 25 locally organized brigades (one per region) split into 150 battalions (one per administrative district). Around 10,000 full-time soldiers will make up the core of the force, but Ukraine hopes to recruit 1.5 million to 2 million people. Thousands of Ukrainians are already signing up to help defend their country from Russian invaders.

Correction, March 4
The original version of this story misspelled Olena Prokopenko’s first name. It is Olena, not Olenka. 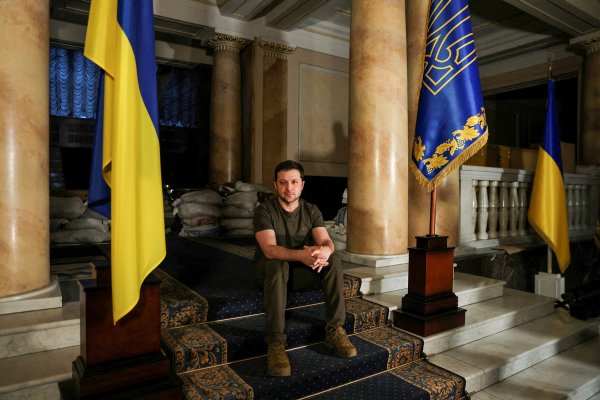 How Volodymyr Zelensky United the World
Next Up: Editor's Pick