Meet the Russian Figure Skater One Bad Fall From Paralysis

The Olympic figure skater Evgeni Plushenko, one of Russia’s most beloved athletes, was nearing the end of his performance at the Winter Games in Sochi on Sunday night when he felt a sharp pinch in his spine. Few in the packed stands of the Iceberg Arena, whose audience that night included Russian President Vladimir Putin, noticed the subtle change in the skater’s posture at that moment. But his trainer, Alexei Mishin, froze as Plushenko came out of his two final jumps. “They were flawed,” he told TIME afterward. “You could tell he was hurting.”

Hardly a year has passed since Plushenko, the home-crowd favorite of the Games in Sochi, had major surgery on his spine—the 13th operation of his career—which left him with debilitating pain through much of his Olympic training. Although he won a gold medal at the 2006 Winter Olympics in Torino, he is, at 31, now in the twilight of his career, and his wife has warned that another bad fall could paralyze him.

But none of that has kept him from competing. On Sunday, after his performance in the team figure skating event, Russia finally won its first gold medal. It was the highlight of an Olympic showing that has so far given the host country little to celebrate. Team Russia now stands at sixth place in the overall medals tally, one spot behind Germany, and of all the athletes it needs to help the country pull ahead, none have quite as much pressure on them as Plushenko.

For two years running, national surveys have found him to be Russia’s favorite athlete, well ahead of his peers in more mainstream sports like tennis and boxing. Off the ice, his reputation as a prima donna has also given endless fodder for the tabloids, which never seem to tire of featuring his blond mullet and shimmery suits on their covers. In 2010, when his performance fell just shy of the gold medal at the last Winter Games in Vancouver, Plushenko threw such a tantrum that Putin felt obliged to assuage the skater’s ego in a personal telegram which declared: “Your silver is worth gold.” Plushenko’s big chance to make up for his loss in Vancouver was always meant to come in Sochi.

So in December, when he lost a key qualifying round for the Sochi Olympics to a 19-year-old newcomer, a national scandal broke out. “Everybody was like, ‘What? How could that be? How could we have the Olympics in Russia without Zhenya,” says Yana Rudkovskaya, his wife and manager, using a pet name for her husband. To make matters worse, Plushenko refused to compete in the final qualifying round for the Sochi Games—the European figure skating championships—explaining with his typical aplomb that he was too busy training for the Olympics to compete in any more Olympic qualifiers.

That presented Russia’s Olympic officials with a serious dilemma. They could either bend the rules and give Plushenko another chance to join Team Russia, or they could risk angering his legion of fans by keeping him out of the Games. After much debate behind the scenes and in the press, Plushenko was allowed to perform a special “control run” for a committee of Russian officials and figure skating experts. The performance was held behind closed doors only two-and-a-half weeks before the Olympics commenced, and it has never been shown to the public. But whatever Plushenko did on the ice that day, it secured him a ticket to Sochi.

So far, he has used it to fine effect. His four-minute solo performance on Sunday helped push the national figure skating team to the top of the podium, even though, according to his trainer, Plushenko was holding out. “He didn’t go out there to show his full power,” Mishin said Monday. “He did just enough to get the right team result.”

Minutes after that result earned a gold medal for him and his nine teammates, Plushenko announced that he would be performing for another one in the men’s singles event on Thursday. And what about that whole back problem? The pins surgically implanted in his spine? The risk of paralysis? “There are no healthy athletes in the major leagues,” Mishin said. “Everybody hurts.”

Though her tone is a bit less cavalier, Plushenko’s wife and manager agrees that it would have been wrong to pull out of the Olympics because of her husband’s health. While driving on Monday to the medals ceremony to see him on the podium, she told TIME by phone that, because of the pain, “He could have decided to ask for a replacement. And he didn’t do that. He decided to compete to the end like a real man, a real athlete. Who could fault him for that?”

Well, maybe his doctors. But certainly not his fans. 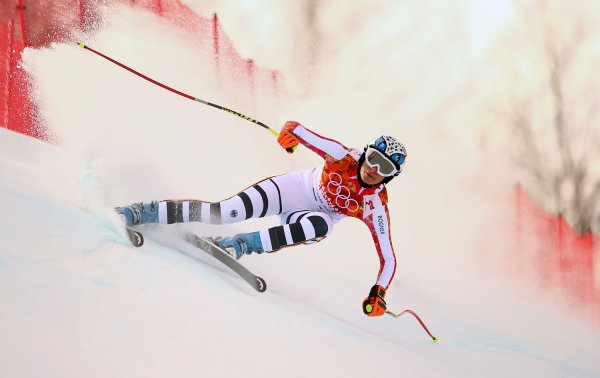