Mark Barden, whose son Daniel was killed in the Sandy Hook shooting, gets a hug on Oct. 4, 2017, in Newtown, Connecticut.
Spencer Platt—Getty Images
By Melissa Chan

For nearly two decades, gun makers in America have been widely viewed as untouchable in court, where they’re impervious to most lawsuits under federal protections.

That impression came crashing down this week when nine families who lost loved ones in the Sandy Hook Elementary School shooting announced they had secured a $73 million settlement against Remington Arms, ending a landmark lawsuit over how the company marketed the rifle used in the massacre in Newtown, Conn. on Dec. 14, 2012.

This marks the first time a U.S. gun maker has settled in a lawsuit related to a mass shooting—a nearly impossible feat due to a 2005 federal law that largely shields firearm and ammunition manufacturers and sellers from liability when their products are used in crimes.

Read more: Just About Everyone But the Gun Maker Gets Sued After a Mass Shooting

The Sandy Hook families hope the legal outcome will shake up the firearms industry and open the door to more lawsuits against gun makers. But the case may not be the watershed moment gun-safety advocates have been aching for.

Why this case succeeded where others have not

While it gave hope to many that there may be a viable way around such sweeping federal immunities, Koskoff’s strategy isn’t a perfect blueprint, experts say. That’s mostly because it’s unclear whether it could be replicated around the country, says Timothy Lytton, a Georgia State University law professor and author of Suing the Gun Industry. Unique elements allowed the case to succeed in ways others have not, Lytton says, meaning those who take on the challenge next face uncertain prospects.

“I don’t think there’s reason to believe at this point that it’s going to unleash a lot of litigation,” Lytton says.

For one, Remington’s bleak financial status likely helped. The gun maker filed for bankruptcy in 2018 and again in 2020, at which time its assets were auctioned and sold. By and large, U.S. gun makers have been resistant in negotiations, but the bankruptcy reorganization may have made Remington’s representatives more “willing to come to the table in a way that other gun manufacturers would not be,” Lytton says. The $73 million is being paid by four insurance companies that had represented Remington, according to Koskoff.

Another element that played a crucial role was the Connecticut Supreme Court’s broad interpretation of a state statute that allowed the case to proceed in the first place. A few exceptions in the 2005 federal law—formally known as the Protection of Lawful Commerce in Arms Act (PLCAA)—make it possible to take on a gun maker. If a defective weapon causes death or injury, for example, or if a manufacturer is found to have violated a law applicable to the sale or marketing of the product, a lawsuit may be filed.

Read more: Mass Shootings: ‘This Is What Normal Has Come to Be Like in America’

The Sandy Hook families argued that their lawsuit fell under the latter exception, claiming Remington’s marketing of its Bushmaster rifle, the weapon used in the attack, was unethical and therefore violated Connecticut’s Unfair Trade Practices Act. The general statute for consumer protection isn’t specific to firearms, but the plaintiffs argued it was applicable to the sale of guns. Connecticut’s high court agreed in 2019, interpreting the language in the statute broadly.

But courts elsewhere have disagreed and been more restrictive. The discrepancies over how specific the language has to be, and whether it has to explicitly name firearms, is partially why Koskoff says his strategy “probably wouldn’t be availing in all 50 states.”

In December, Nevada’s highest court rejected a similar case that Koskoff had filed on behalf of a couple suing multiple gunmakers and sellers after their daughter, Carrie Parsons, 31, was murdered in the 2017 Las Vegas massacre, in which more than 50 people were shot to death. When the court dismissed the case, it cited a specific state statute that provides the gun companies immunity from the Parsons’ claims.

A potential for backlash

It’s unclear what impact the Sandy Hook case might have on the future of the gun-safety movement. Lytton says history has shown that when settlements are reached in similar cases, recoil can follow. Most notably, a Republican-controlled Congress enacted PLCAA following pressure from the firearms industry, one year after the families of victims in the 2002 D.C. sniper case won a $2.5 million settlement against a firearm dealer and manufacturer.

“It’s possible that this will encourage other plaintiffs to come forward,” Lytton says. “It’s also possible that it will fuel some sort of backlash.”

Hannah D'Avino, left, and Mary D'Avino display a picture of Rachel D'Avino, who was killed in the Sandy Hook school shooting, during a news conference in Trumbull, Conn., on Feb. 15, 2022.
Seth Wenig—Associated Press

Remington did not respond to requests for comment. The company did not accept liability as part of the settlement. But Koskoff says every other case he’s settled included a standard provision that says the settlement does not constitute an admission of guilt. This settlement contains no such wording, Koskoff says, adding that the Sandy Hook families never would have agreed to the settlement if it had included that language.

Mark Oliva, a spokesman for the National Shooting Sports Foundation, a firearm trade association, insists Remington would have prevailed if the case had gone to trial. In a statement, he said the settlement “has no impact on the strength and efficacy” of PLCAA.

Still, gun-safety and gun-control advocates point to signs of hope for future litigation. In July, New York state enacted a law that would make it easier to bring civil lawsuits against gun makers and sellers. Billed as a first-of-its-kind measure in the nation, it allows firearm sellers, manufacturers, importers, and marketers to be held liable for a “public nuisance.”

And even though Koskoff’s case in Nevada was dealt a blow, another lawsuit in the state also related to a mass shooting has been allowed to forge ahead. In August 2021, the families of five victims from the 2019 massacre in Dayton, Ohio, sued the maker of the magazine that allowed a gunman to fire 41 rounds in 32 seconds, killing nine people.

While the Nevada-based magazine manufacturer filed a motion to dismiss, arguing that PLCAA protects it from the lawsuit, a Clark County court allowed the suit to move forward. In January, the court ruled that the 100-round magazine used in the shooting was an accessory that was unessential to the use of the firearm, so it wasn’t protected under federal law.

Read more: They Survived Mass Shootings. Years Later, the Bullets Are Still Trying to Kill Them

“We used a different path around that immunity shield,” says Ben Cooper, the attorney representing the Dayton victims and their families.

Cooper says the Sandy Hook suit emboldened the Ohio families to challenge the gun industry. “It’s not easy to go after a Goliath,” he says. “But our goal is the same.”

That’s what matters most now to Koskoff, who plans to release thousands of Remington’s internal documents obtained through the settlement, in the next step to help prevent mass shootings. And it’s what energizes Nicole Hockley, whose 6-year-old son Dylan was killed in the Sandy Hook attack.

Before she left her house Tuesday morning to speak at a news conference about the settlement, Hockley says she tried to remember what life was like when Dylan was still alive. She remembers how they were supposed to make gingerbread houses that day. But now, the closest she gets to Dylan is kissing his urn every night. 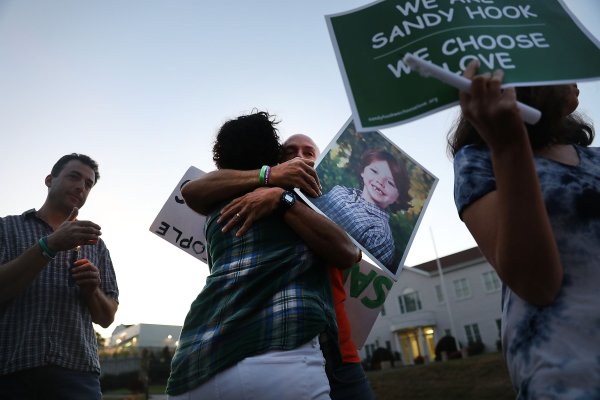