The eyes of the figure skating world have been trained on Russia long before teen figure skating champion Kamila Valieva became an object of global intrigue. The country has had a virtual pipeline of world and Olympic champions in women’s figure skating in recent years. And one school, in particular, is responsible for all of those victories: Sambo 70 in Moscow. Within that school, one coach is largely responsible for producing champion after champion: Eteri Tutberidze.

Before the Beijing Olympics, the spotlight was already on Tutberidze and her school, which has for years churned out what appears to be a conveyor belt of young—generally 15 or 16-year-old—skaters who shine brightly and capture the world’s attention for one season, only to be replaced by the next, often more talented model the following season. At this year’s Russian national championships, Tutberidze’s students—Valieva, Alexandra Trusova, and Anna Scherbakova—earned the top three spots. The trio also swept the podium at the European championships. It was widely expected they could do the same in Beijing.

But now Valieva is at the center of the 2022 Winter Olympics’ biggest scandal. The teenager is controversially allowed to skate at the women’s event, which starts on Tuesday, despite a positive test for a banned substance in late December that was made public last week. And that has turned attention back to the Moscow training academy that has produced a string of world and Olympic medalists since 2014.

Tutberidze’s first protege to make a global splash was Julia Lipnitskaya in 2014. At 15, Lipnitskaya won the European championships weeks before the Sochi Olympics, where she then skated a mesmerizing free program to help the Russian team to Olympic gold in the team event. While Lipnitskaya ended up in fifth in the women’s event, it was the first glimpse of Tutberidze’s coaching prowess. By the next Winter Olympics in PyeongChang, she had built up her program to produce a deep enough bench of talented young skaters to earn not just one, but two Olympic medals—gold and silver.

Tutberidze rarely gives interviews but allowed NBC commentator Johnny Weir to visit last fall. Weir had Russian coaches most of his career, is fluent in Russian, and has spent time training there and brings a unique insider’s-outsider perspective to what makes Tutberidze and her school both so successful and so misunderstood. “To understand the power of Russian women’s figure skating now, you have to understand where the mentality of Russian figure skating comes from,” Weir said to TIME in a lengthy interview before the Beijing Games. (Weir has since condemned the decision to allow Valieva to skate, calling it a “slap in the face to the Olympic Games, to our sport, and to every athlete that’s ever competed in the Olympics clean.”)

Figure skating in Russia has always been a popular sport, unlike the hot and cold relationship the sport has had in the U.S., where the Tonya Harding scandal caused an explosive interest in the sport in the 1990s that led to lucrative tours and television specials, then died down when the intrigue had run its course. During that time, elite Russian coaches including Galina Zmievskaya, who trained 1994 Olympic champion Oksana Baiul, and Tatiana Tarasova, flocked to the U.S. to set up schools, mostly along the East Coast. Singles skating in Russia, especially for women, declined; while Russia had dominated Olympic pairs and ice dance for decades, and enjoyed recent success with a string of men’s champions, the country had never won an Olympic medal until Irina Slutskaya earned silver in 2002.

With the fall of the Soviet Union also came a drastic change in the state-sponsored infrastructure that had supported athletic training. The traditional feeder system of grooming young children for specific sports required a rich network of sport-specific training centers where promising talent could learn and perfect their skills. That system, says Weir, depended on a hierarchy built around a star coach under whom an entire system of smaller schools and assistant coaches worked to screen and triage athletes so only the most promising were funneled to the top schools.

“For a long time young coaches didn’t have a lot of opportunities in Russia,” says Weir. “Because they would be working in schools run by legends.” The official dismantling of the Soviet system created an opportunity for enterprising young coaches such as Tutberidze, who had spent time in the U.S. and wasn’t wedded to the old model.

“Eteri was the first to rocket past the rules and didn’t need a strong, star coach as a keeper,” says Weir, although he admits he isn’t privy to how Tutberidze got her start in coaching. But she “did it by herself. She had her own philosophy about training, having been a skater herself,” he says.

But the sheer number of talented young teens flocking to the school, and the extreme success they achieved, raised inevitable questions about Tutberidze’s methods, and the environment at the rink where it seemed that every skater was expendable, and only as valued as the medals they won. Conflicts had been brewing about the school as students have come and gone; Evgenia Medvedeva, the reigning Olympic silver medalist, left Tutberidze after the Games in 2018 to train in Canada, before returning again and then retiring from competitive skating. Trusova, the first woman to land a quadruple Lutz in competition, was training with Tutberidze for the Beijing Olympics but left the school to train with Olympic champion Evgeni Plushenko in 2020 before returning again to work with Tutberidze this season.

As the Beijing Olympics got underway, the rumors and criticism that have been shadowing Tutberidze and her school finally reached a crescendo. On Feb. 9, Russian media reported that a member of the Russian skating team had tested positive for a banned substance. Days later, the International Testing Agency (ITA), the group responsible for overseeing doping testing at the Olympics, confirmed that the failed test came from Valieva, the 15-year-old Russian national and European champion and favored gold medalist at the Beijing Olympics. ITA reported that Valieva tested positive for a heart drug normally prescribed to treat angina, but that athletes have used to improve blood flow and endurance to allow them to train longer.

The news raised questions about the methods of Sambo 70 and any role the coaches and staff there might have played in the violation, given that Valieva is a minor and there was no indication she had filed an exemption for taking the drug for a medical reason.

Athletes and national Olympic Committees, including the U.S. Olympic and Paralympic Committee, immediately criticized the decision to let Valieva compete in Beijing, noting that while the testing was done outside the time window of the Olympic jurisdiction, which began on Jan. 27, Valieva did test positive for a banned substance, and that allowing her to compete would be unfair to athletes who are not doping.

The CAS’s decision applies only to the suspension, and not to the merits of the actual doping violation, which it will address separately. Because of that, the IOC announced that no medals will be distributed for either the team event, which the Russians won or the women’s event, which is scheduled to start on Feb. 15.

One technique that makes Tutberidze’s skaters so consistent is her insistence on consistency with jumps. If a skater pops a jump—meaning she opens up and doesn’t do all the rotations in the air before landing—while performing a run-through of her program, the music stops and she has to redo the program from the beginning until she executes it cleanly. That can be exhausting, especially if the popped jump comes toward the end of the program, which means the skater is essentially doing multiple run-throughs in a session.

Her mantra, which every young skater at the school is familiar with, is that “you have to do today because you are not promised tomorrow.” It’s a potentially daunting teaching tool, especially for young girls. Before the Olympics, Valieva admitted during a press conference that training at the rink meant constantly pushing yourself to do better. “You say, ‘Here comes another quad. And another! And then another. You can’t just stay on the sidelines, you try to do more attempts as well.”

Figure skater Kamila Valieva (C) of Russia with her coaches Eteri Tutberidze (L) and Daniil Gleikhengauz (R) waiting for the score after performing during a ladies' free skating event at the 2019-20 ISU Junior Grand Prix of Figure Skating Final, at the Torino Palavela indoor arena.
Sergei Bobyle—TASS via Getty Images

Valieva’s positive drug test raises questions about how those young skaters are able to train, day in and day out, at such a high level, doing multiple runs of programs packed with difficult quadruple jumps, and whether doping played any role in their remarkable feats. It highlights the precarious position that young athletes, especially those under 16 years old, are in if the adults on their teams are making decisions for them without their knowledge or full understanding of the consequences.

The circumstances surrounding Valieva’s failed drug test has cast a pall over the women’s event, as well as an undercurrent of suspicion about the entire Russian women’s squad, including Valieva’s teammates and fellow Tutberidze pupils Trusova and Shcherbakova.

While Weir acknowledges that during his visit he likely saw the best version of the school, its students and coaches, he says “there were some tears and some laughter just like at any American ice rink with skaters competing at different levels.” At the same time, he says, “if you’re looking for fuzzy bunnies and chocolate kisses, those are not to be found in any Olympic sport. It’s a hard, hard journey.”

For Tutberidze’s students, it’s even harder because of the mystery and jealousy surrounding her quick success and the fact that she was able to so adroitly bypass the hierarchy system of coaches in skating to establish her own place in the Russian skating infrastructure. “There are a lot of different opinions about her, her school, and why she is successful,” Weir says. “She is aware of that, but doesn’t get bogged down by the press surrounding her.”

Regardless of how Valieva performs, the scandal will unquestionably color her first Olympic experience, and, even more importantly, the meaning of the Olympic movement for so many more athletes and spectators around the world. Figure skating has not been immune to such blows to its credibility—this year marks the 20-year anniversary of a judging scandal at the Salt Lake City Games in which the judges were manipulated to favor the Russian pairs team—but this time, it may be one scandal too many. 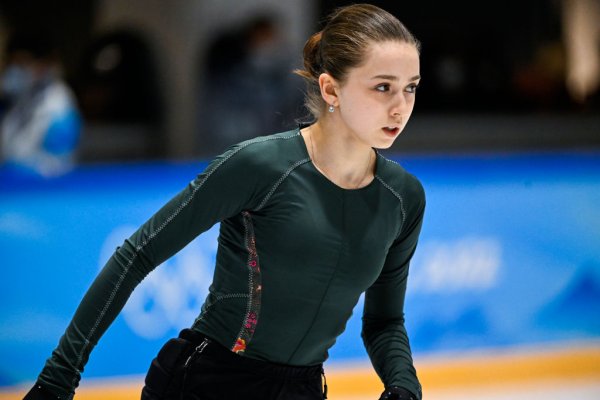 'Dirty Cheaters.' Olympians Let Loose on Kamila Valieva and the Russian Doping Controversy at the Beijing Olympics
Next Up: Editor's Pick