After weeks of shortages across the country, Americans are gradually finding it easier to get their hands on at-home rapid antigen tests. That’s in large part because the Biden Administration’s massive buying spree is giving test companies the confidence to manufacture and distribute a product that, like the course of the pandemic itself, has an uncertain future.

Executives at several major test companies say that, while their production lines are ramping up, they are prioritizing orders from the federal government in order to deliver on those lucrative contracts. Because of that strategy, some other buyers—including retailers and state governments—are still finding it challenging to get enough tests to meet current demand. But supply constraints are expected to ease up as the manufacturers leverage their big payday to boost production.

“Some of the manufacturers were really apprehensive about expanding their production because they didn’t know that there was going to be demand for these tests,” says Lindsey Dawson, a KFF (Kaiser Family Foundation) researcher who has tracked U.S. rapid testing supplies. “These manufacturers are being reassured of a purchaser—the federal government.”

Indeed, companies have to invest in employees and facilities to meet high demand. But if the demand is temporary, that investment can backfire. Consider what happened in spring 2021: At the time, health authorities were de-emphasizing home testing as a public health strategy, focusing instead on vaccinations, which had proven incredibly effective at keeping people from falling ill. Demand for tests plummeted and Abbott Laboratories, which makes the popular BinaxNOW Self Test, couldn’t even unload its inventory—and so had to simply throw out test components that were nearing their expiration dates.

Demand now is incredibly high, to the point where manufacturers cannot keep up. Federal contracts are spurring them to meet the moment. iHealth, which received a $1.3 billion federal contract to deliver 250 million tests, had scaled its manufacturing to 10 million tests a day in late January, up from 1 million in November. Still, it can’t fulfill all of the order inquiries it’s getting from retailers, states, nonprofit organizations, and employers.

The company is aiming to double production by the end of February, but in the interim, it’s possible that the federal distribution programs, which serve all Americans, might alleviate some of the pressure at the state and local levels. “We have to limit our supply to different states a little bit,” says chief operating officer Jack Feng. But, he adds, “If the federal government will give free tests to everyone, it will also help those states, [which] will not need to buy so many tests.”

Now in its third pandemic year, the U.S. is relying on frequent testing to mitigate the virus’s spread. When the highly contagious Omicron variant swept the country, many health agencies revised COVID-19 guidance, curbing contact-tracing efforts—which had become unmanageable and ineffective—and reducing the length of recommended quarantine periods. “Test-at-home” and “test-to-stay” programs became the default strategy to avoid business and school closures, address labor shortages, and safely allow life to resume with some normalcy.

Read more: What to Know About COVID-19 Tests, From PCR to Antigen to Antibody

At-home rapid antigen tests, which return results in minutes, can help curb viral spread if individuals swab before congregating with others—and then stay home if they are positive. Of course, that is only possible if people have tests on hand. As cases surged in the last weeks of 2021, Americans went into a buying frenzy so they could test before traveling, gathering for the holidays, and then returning to work. To bolster national supplies, the Biden Administration announced in late December that it would allocate $4 billion towards a program where it would purchase 500 million at-home tests, then distribute those for free through an online ordering system, limiting four per household. In January, the administration pledged to double the number to 1 billion tests. So far, it has distributed tests to 60 million households, or about half the households in the U.S.

Manufacturers were permitted to participate in the federal program only if they had previously unallocated tests, available to ship within two weeks, so as to not divert existing test supplies that they had promised to the states or retailers. But according to interviews with company executives and reviews of recent earnings calls, the companies that received federal contracts have since prioritized the federal obligations over other new order requests. Siemens Healthineers, for example, received emergency use authorization for its rapid test from the U.S. Food and Drug Administration (FDA) in late December and quickly became a government supplier, landing a contract to deliver 50 million tests by the end of February. Production for other outlets is still scaling up—about 12 million tests will become available this month through retailers including Amazon, a company spokesperson told TIME. In an earnings call last week, Siemens CEO Bernd Montag said, “we don’t have the channels, and not the ambition yet, to go too much into a scattered retail space. So number one is, of course, the big government programs.”

“[Manufacturers] have a whole series of contracts they’re bidding on,” says David Dreyfus, an assistant professor of supply chain management at Rutgers University Business School who specializes in health care operations. “When they win these contracts, they sort of have to scramble and say, oh boy, we got a big one here. What are we gonna do? And who’s going to be pushed off until later?”

Many households will use their free federal test quickly and then will have to rely on other outlets like community health centers and retailers to get more, so it’s critical for those places to have reliable inventory. States are eager to distribute free tests to make it easier for residents to comply with “test-to-stay” programs, but their supplies are limited. Washington state, for example, launched a website on Jan. 21 for residents to order up to five free tests. All 1.4 million were claimed within eight hours. Orders resumed 10 days later—and supplies were wiped out by the next day.

Ohio ordered 1.2 million tests in early January but didn’t receive the first shipment of 400,000 tests until mid-month. The state had to pause deliveries to public libraries and local health departments in order to prioritize schools and universities. Deliveries started coming in faster at the end of the month—the state was able to distribute about 875,000 tests in January—but there’s not enough to go around. “We anticipate our ability to provide tests to these local partners will remain somewhat intermittent,” says Ken Gordon, a health department spokesperson. “We have started to receive additional tests, though not in the volume we initially planned for, and not on a consistent cadence.”

Some retailers and state officials have blamed the federal government for gobbling up the supply when their inventories run dry. Maryland governor Larry Hogan clashed with the Biden Administration when, during the week that the federal program launched, the state’s vendors cut off orders in order to support the national distribution effort. A spokesperson for the Maryland Department of Health declined to tell TIME which manufacturers had pulled the plug, but said that White House officials addressed and corrected the problem.

“It’s on the manufacturers, on private industry, to make these judgment calls about what the United States needs for public health measures moving forward,” says KFF’s Dawson. “They’re not necessarily public health experts and they have a fiduciary responsibility to their shareholders.”

Going forward, though, companies investing in manufacturing operations will be poised to serve a variety of buyers—whether they be U.S. states, the federal government, nonprofits, private employers, or other countries that may need mass quantities. That’s good for public health—and for business, experts say.

Read more: Omicron Could Be the Beginning of the End of the COVID-19 Pandemic

Some executives are skeptical that the demand will last—even as they scale up their operations. “I would very much expect that… specifically on antigen tests, probably as we go into the summer, they’re going to drop sharply,” said Roche Diagnostics CEO Thomas Schinecker on an earnings call last week, but cautioned that “it’s very hard to predict how things are going to play out.” Roche, which produces both in-lab and at-home antigen tests that detect the COVID-19 virus, received FDA authorization for its at-home kits on Dec. 24 and won a $380 million federal government contract in mid January. (The company declined to share the number of tests in the contract.) Its first delivery of tests provided to the federal government are now reaching Americans who ordered them through the federal website. The company is planning to work with retailers, pharmacies and states starting in March. “Ramp-up takes time after authorization,” noted Matt Sause, president and chief executive of Roche Diagnostics North America, in an email to TIME. “It is a brand new product manufactured in South Korea and will take several weeks to produce.” The company intends to provide tens of millions of tests for Americans each month.

Public health policies and personal risk tolerance—not to mention the virus itself—are constantly changing. Whether demand stays consistently high for the long term, or ebbs and flows with virus cases, manufacturers are better poised to handle the market going forward.

The U.S. has been playing catch-up with testing since the start of the pandemic. In the earliest days, well before at-home tests were available, the country grappled with swab and reagent shortages that severely limited the number of lab-based tests it could administer. Then, in the summer of 2020, people waited weeks for results due to laboratory backlogs. The country was again flat-footed during last year’s Delta surge because so few testing companies had received FDA authorization.

It took the Omicron testing crunch for the federal government to prod the free market. Even though some states and retailers are still dealing with supply hiccups, the supply chain is bound to get smoother—and may finally be ready for whatever comes next. 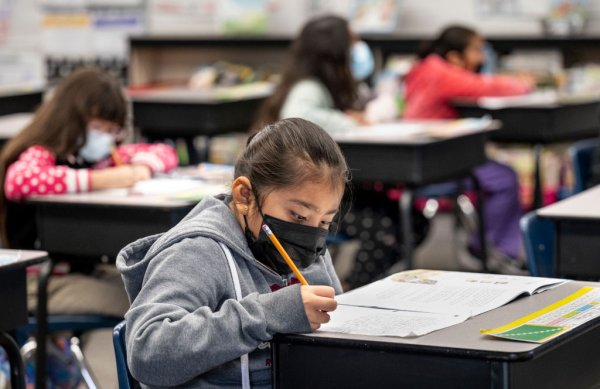 It’s Time to End Mandatory Masks in Schools
Next Up: Editor's Pick