Cattle feed from a trough in their pen at the Karan Beef (Pty) Ltd. feedlot in Heidelberg, outside Johannesburg, South Africa, on Friday, Nov. 23, 2018.
Waldo Swiegers/Bloomberg—Getty Images
By Aryn Baker

A new study published Feb. 1 in the journal PLOS Climate suggests that phasing out animal agriculture over the next 15 years would have the same effect as a 68% reduction in carbon dioxide emissions through the end of the century.

The analysis draws upon data from the Intergovernmental Panel on Climate Change (IPCC) and the United Nations Food and Agriculture Organization (FAO) showing that at least a third of anthropogenic methane emissions and more than 90% of nitrous oxide emissions—both powerful planet-warming emissions—come from livestock. It combines those findings with estimates of the amount of biomass like trees and grasses—critical in storing carbon dioxide—lost in the clearing of land for animal agriculture and projections of what kind of carbon sequestration would be possible if that land were returned to its original state.

I spoke with co-authors Michael Eisen, a professor of genetics and development at the University of California Berkeley, and Patrick Brown, a biochemist and the CEO of Impossible Foods Inc., a company that sells plant-based meat substitutes. Eisen is also an advisor for the company.

TIME: Tell me about your findings.

Brown: What we found is that there’s a very simple—which isn’t to say simple to execute—way to unlock net negative [greenhouse gas] emissions, not only on a huge scale but rapidly, and the way to do it is to phase out animal agriculture as an industry. [Doing so] would offset more than two thirds of fossil fuel emissions through the end of the century.

Why this study now?

Eisen: A lot of the consequences of climate change are potentially irreversible and set up positive feedback loops. Which means that it’s essential to act fast. If we phase out fossil fuels and combine it with phasing out animal agriculture over the next 15 years, we could, by the end of the century, effectively reduce the amount of greenhouse gas in the atmosphere back to where it was at the beginning of this century. This is news. And I would say, without a doubt, it’s the best climate news that we’ve had in a very long time because what it says is that there’s a realistic way to put the brakes on the global greenhouse gas emissions that are causing all the consequences of climate change.

In the paper you describe it as a “hypothetical” and radical change in the global diet and agricultural system. In reality it’s hard to imagine this ever happening, and certainly not within 15 years.

Brown: Market forces are the fastest acting institution on Earth. [Before cars] more than 90% of households had a horse. Fifteen years later, it was 5%. The automobile became dominant, not because of legislation or coercion, but because it was a better technology. No one’s gonna go up to any of those farmers or slaughterhouse workers with a gun and tell them to stop doing what they’re doing. It’s going to be driven by consumer choice on the demand side. If there are products that do a better job of delivering what consumers want, nothing can stop that.

Your paper concludes that there is an opportunity to bend the trajectory of climate change, “with minimal economic disruption.” How is this possible, when in the U.S. alone it is a multi-billion dollar industry?

Brown: People overestimate how much of a role animal agriculture plays in the overall economy. It’s something like one or 2% of global GDP.

Yet raising livestock provides livelihoods and incomes for at least 1.3 billion people.

Brown: While the slaughter industry makes a lot of money, farmers raising animals don’t. It’s a crappy business to be in and the dollar yield per acre is very low. It’s hard work. It’s extremely risky.

What about reducing industrial agriculture, which is responsible for most of those emissions, and replacing it with more sustainable methods like regenerative agriculture?

Brown: Regenerative agriculture is a propaganda term used by the industry. What’s driving the burning of the Amazon is clearing land for livestock. What you get after you burn the Amazon is a bleak grassland covered with cows. I don’t think you’re ever going to convince me that those cows stomping around in that grass are going to capture more carbon than that forest.

If, say, a ton of captured CO2 is worth $50, the large majority of animal agriculture land in the world would be more valuable for carbon capture than it is for raising livestock. Farmers could make more money with less uncertainty by stopping what they’re currently doing and focusing on restoring the native ecosystems and capturing carbon and selling carbon credits.

But the carbon market is hypothetical at this point. No farmer can actually make this choice.

Brown: Part of the reason we don’t have it is that the farmers and landowners haven’t realized that there’s a boon to be made by promoting a carbon market. Like if, instead of going to their senators and saying, “we need to fight the threat of alternative meat and dairy products,” they went to them and [said], “I as an individual, and we as a state, would be doing better if there was a viable and thriving carbon market because we have the land that is worth restoring,” that’s how it would happen.

Eisen: Our estimates—conservative estimates—of what kind of price carbon would reach in a thriving global carbon market place the value of the land that is currently used for animal agriculture at an order of magnitude more than its current market value. It is a potential goldmine. You don’t have to imagine massive government programs or some kind of forced transition coming from the outside [to end animal agriculture]. What you need to do is to unlock the market on both sides of the equation. On the demand side by having alternatives to foods that are produced by animals, and on the production side where land has a higher value for a different use. What has to happen is that farmers are in a position to become carbon ranchers rather than cattle ranchers.

You are selling a product [plant-based meat] that benefits directly from a reduction in animal agriculture, so how is this not a conflict of interest?

Brown: Just to be clear. This is not about alternative meat. This is about fundamental climate change solutions. I had zero fundamental interest in being in the food business. What happened was that I realized that the only way we’re going to solve this impending climate disaster was to find a way to drastically reduce the scale of animal agriculture. Impossible is a consequence of my concern about these environmental issues. It’s not the other way around. This is not our data. This is IPCC, FAO, and UN data gathered by others. The great thing about science is that it all comes down to: can you prove it? If what you’re saying is not supported by evidence, if it cannot be independently verified by someone checking the data, it’s not credible. But if it can, it doesn’t matter.

This paper has already generated a lot of discussion. What else do you hope it will achieve?

Brown: I hope it will lead to action and not just discussion. Ideally, farmers will realize that they’re in the wrong business. Maybe people will realize that we want a healthy carbon market. That could be game changing in an incredibly positive way. I hope people will see this as good news and feel energized by it. 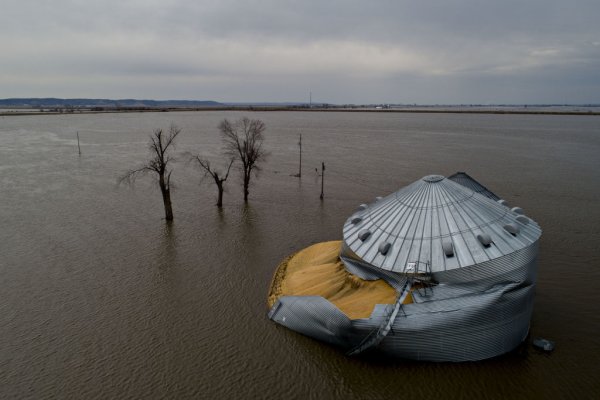 To Fully Tackle Inflation, U.S. Must Tackle Climate Change
Next Up: Editor's Pick