Every Sunday at 2 p.m, the narrow building in Manhattan’s Chinatown echoes to beating footsteps and 1950s Chinese oldies. In the large, mirrored dance studio on the second floor, Irene Ng knows how to get a party started. Turning on the dazzling neon lights, she holds her arms as if she is embracing an invisible partner. Her speedy feet kiss the dance floor; a black scarf floats behind her. Guests, used to Ng’s constant movement, follow her around. Before they realize it, they are on the dance floor.

“I always tell seniors, don’t worry about your steps, just have fun,” says Ng, 57, owner of the Imperial Ballroom Dance Studio. As one of the longest-running ballroom dancing studios in Chinatown—it opened in 1995—the family-run business offers the 50,012 Chinese immigrants in Chinatown a space for socialization and a sense of home.

The holiday is not the only reason this institution has proved vital in recent years. Amid a pandemic that has coincided with rising rates of anti-Asian hate crimes in the U.S., social isolation has proved a deep problem for many elderly Chinese immigrants, particularly those with limited English proficiency. The stakes are high. Social isolation and loneliness may contribute to severe health risks, according to a report from the National Academies of Sciences, Engineering, and Medicine; risks include depression, dementia and premature death. Meanwhile, Chinatown’s population is aging quickly, its median age rising from 40 in 2010 to almost 50 in 2019, according to the Asian American Federation Census Information Center’s 2021 City Council Brief. One reason Chinatown seniors experience isolation: younger family members tend to move out of the area. In Chinatown, only about 14% of the population is under 18, well below the citywide share of 20%, the 2020 Census found.

Read more: Hate Crimes Against Asian Americans Are on the Rise. Many Say More Policing Isn’t the Answer

“Young parents often say to their children that ‘We can do better than this,’ so they move out of their tenement building,” agrees Wellington Z. Chen, executive director of the Chinatown Partnership Local Development Corporation (CPLDC). “The caterpillars did all the hard work to launch their butterflies, so what do you do with the caterpillar shell?”

The feeling of loneliness may worsen during the holiday season. But at the Imperial, no one is left alone. The crowd of beginners may not be competition material. Some move awkwardly or kick in the wrong direction, but laughter is everywhere. Clustered on a sofa in the studio, sharing a jar of homemade almond cookies, a group of women is excitedly chatting in Cantonese about where to shop for winter coats.

“Almost all the people who come here are Chinese seniors,” says Ng, pointing to a group sharing snacks in the corner. “They are very lonely and need some companions.”

Raymond Kang, 77, who immigrated to the States in 1978, has been dancing in the studio for more than 20 years. “Us seniors can’t relax, or we will get amnesia,” he says in Mandarin mixed with English.

Kang’s son lives in Las Vegas and rarely comes home, so Kang and his wife Sylvia Hong spend every Sunday here at the Imperial Ballroom to practice and meet old friends.

“There is a cultural distinction between American and Chinese family values,” says Kang. “American families value children’s independence, while Chinese families highlight the moral of filial piety. My son was raised in the States, so I am learning to let him go. At my age, you will learn that friends are the most important thing in life.”

Lack of ability to communicate in English can heighten the sense of apartness for older residents. Nearly half the city’s Asian population has limited English proficiency, meaning they don’t identify as speaking English “only” or speaking English “very well,” according to the City Council brief. In Chinatown, the proportion of Asian residents with limited English proficiency was still higher, 54% in 2019.

Read more: ‘Not a Victim.’ Asian American Elders Stand Resilient in the Wake of Hateful Violence

Liqun Yang, 65, who used to own a Chinatown restaurant serving the cuisine of his native Fuzhou, comes to the studio three times a week to practice. He has been learning ballroom dancing for three years, but only recently has become serious about it.

“At first, I only danced to exercise my limbs, but now I really want to master a skill,” Yang says in Mandarin. “I have nothing to do at home after retirement, so I want to keep myself busy.”

Yang doesn’t speak much English, even though he immigrated to New York when he was 30. But he easily found a community in the dance studio, where many speak his home dialect, Fuzhounese.

Ng and her husband Ming Chau never close the ballroom, except for the 15 months during the pandemic shutdown. They received what Ng describes as a small PPP loan and reopened as soon as regulations permitted last June, wanting Chinatown’s elders to have a place to come. However, fear of contracting COVID-19—and of being attacked by anti-Asian bigots—remains prevalent among those served by the studio.

“We held a lot of parties in the past, but right now we don’t have many, because the Chinatown seniors are afraid to go out,” said Ng.

“Last July, Chinatown local Minerva Chin was punched in an unprovoked attack from behind at Mulberry Street. She is a retired school teacher and a great friend of our organization,” says Chen, of the CPLDC. “Anti-Asian sentiment has a cumulative effect, both psychological and physical, and it brings anxiety, anger and unease in the community.”

So, Ng and Chau work to lure customers back—not just with dancing, but with a sense of family. However, as the Omicron variant runs rampant, Ng says there aren’t many visitors in the studio these days. She is even considering rescheduling the studio’s Lunar New Year showcase party till the pandemic cools down.

If she does, customers will have the memory of past parties to sustain them. On Thanksgiving Day last year, with Imperial’s dance floor as busier as ever, the music paused. Chau played a birthday song on the speaker for a regular dancer, while Ng brought out a buttercream cake with a ring of strawberries on top. The crowd cheered joyfully as the birthday celebrant blew out the candles, too shy to say anything to the crowd despite Ng’s invitation.

“I understand this community,” Ng said afterwards, beaming as she watched the dancers sharing the cake. “I understand what they need.” 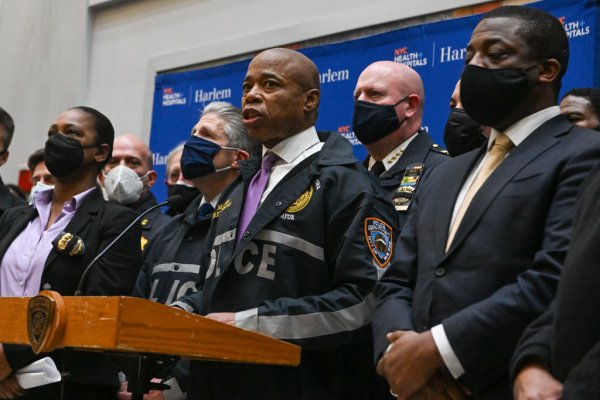 Community Leaders Fear Eric Adams’ Plan to End Gun Violence Is Leaving the Public Out of ‘Public Safety’
Next Up: Editor's Pick