In Blow to McCarthy, Supreme Court Says Congress Can Keep Voting from Home

In a functional Washington, the three branches of government have a quiet understanding: they’ll check and cajole, temper and troll. Congress has no problem denying confirmations for top Administration jobs on whims—and they do—while the White House has no trouble sending an agenda that may run counter to incumbent lawmakers’ interests down Pennsylvania Avenue. The Supreme Court can tell both to tear-up their work and start from scratch.

But when it comes to how they handle their truly internal affairs, there’s a polite agreement to let each body regulate its own business that’s rooted in comity as much as the Constitution itself. This morning, the Supreme Court agreed with two lower courts in their ruling that the Judiciary has no power to help House Minority Leader Kevin McCarthy’s lonely effort to scrap a proxy voting system put in place to keep government moving amid a pandemic.

Here’s the backstory. Back in May of 2020, House Democrats approved a resolution that allows lawmakers to send a letter to the House Clerk authorizing a colleague to cast their ballot for them. Lawmakers on the floor could vote on behalf of as many as 10 of their colleagues at a time, resulting in a less crowded chamber and allowing sick, exposed, or health compromised members to stay home. (Since then, the Capitol, in fits and starts, has nonetheless become a super-spreader site.)

McCarthy correctly argued that never before had lawmakers been able to cast votes without being physically present, and that the Constitution simply does not allow a member of Congress to delegate the power to vote to someone else. He was, however, running up against the fact that the Constitution also expressly allows Congress to determine its own rules. And, in a party-line vote in 2020, Congress decided it wanted proxy power to be the law of the land, and Speaker Nancy Pelosi has repeatedly extended that well beyond its initial 45 days.

Republicans quickly rallied against the change, largely because it helped Pelosi and her Leadership team guide a very narrow majority through tricky times when lawmakers with health issues stayed away from Washington, absent officials could threaten votes and dozens are trying to balance re-election bids back home with the mundane work of renaming post offices. McCarthy’s initial challenge to the resolution drew 160 co-signers from his House GOP colleagues. But over time, just two GOP names remained on the lawsuit against Pelsoi that eventually made it before the highest court in the land: McCarthy and Rep. Chip Roy of Texas.

Why? Proxy voting, much like working from home, soon became seen as a perk by many members of both parties. A Brookings Institution analysis found that from the first proxy vote on May 27, 2020, through Jan. 20 of this year, roughly 80% of House members had used proxy voting to varying degrees, including almost 100 Republicans. Some used it so they could join Presidents Donald Trump and Joe Biden on their respective visits to their home districts, while others, like Rep. Colin Allred, used it so he could cast votes while taking paternity leave at home in Texas. Contrast that to Sen. Tammy Duckworth or Rep. Jamie Herrera Beutler, both of whom have had to bring newborns to the floor to cast their ballots in the Before Times.

McCarthy, undeterred, kept pushing his case through the courts, and kept losing. Finally, today, McCarthy had his day for a curious case that seemed almost purely academic by the time it reached the marble court building just across First Street Northeast from the Capitol where the House Minority Leader has his offices. No doubt, law students will review the case for ways that perhaps, with different Justices or a more clever contortion of precedent, could have found a different outcome.

But Washington isn’t a faculty club. Not only does the Constitution say the House can manage its own affairs, its all-powerful Speech or Debate Clause expressly protects members of Congress from legal action for anything they say while executing their job, a form of political qualified immunity, meaning Pelosi could not be sued.

The Justices declined to let McCarthy’s lawyers make their case to the court. Without comment, they simply denied him an invitation to come offer arguments. The Constitution seemed to have been clear enough to the Justices: adjudicating internal House matters was not the best—or even proper—use of their time. The Justices themselves are all too familiar with the regular grilling they get from lawmakers about why cameras are banned from the High Court’s chambers. Stray too far afield and reciprocity can be problematic. 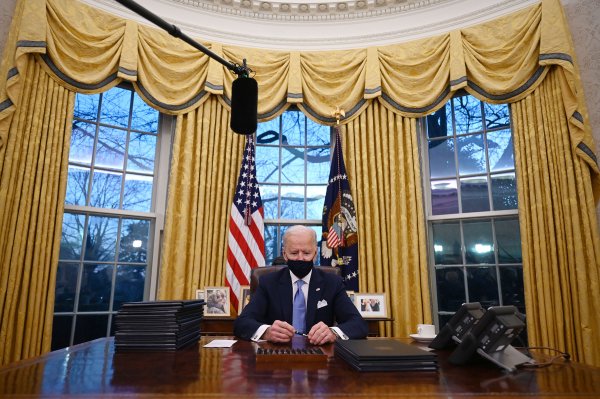 How To Swap Presidents Without an Insurrection
Next Up: Editor's Pick