VIENNA, AUSTRIA - DECEMBER 01: A man gets a Covid-19 vaccination on the first day of a temporary vaccination center on the passenger ship MS Vindobona on Donaukanal (Danube Canal) on December 01, 2021 in Vienna, Austria.
Thomas Kronsteiner/Getty Images
By Marton Eder / Bloomberg

The parliament’s lower house approved the policy on Thursday with additional support from most deputies in two opposition groups. The far-right Freedom Party rejected the plan.

The mandate will come into force next month, and officials will start imposing fines as high as 3,600 euro ($4,084) for dissenters from mid-March. The government will also introduce a lottery system to reward people willing to take the shot.

After months of preparation, Austria is forging ahead with a policy that goes beyond the efforts of other nations to convince people to get vaccinated. It has enforced some of the strictest restrictions in the latest wave of the virus, including a nation-wide lockdown in November that has persisted, in principle, for the unvaccinated.

Some European countries have been relaxing their policies with the spread of the omicron variant, which has caused spiraling infection rates but fewer hospitalizations. The U.K. will end requirements for a Covid-pass or face masks next week and the Netherlands ended a strict lockdown earlier in the week.

Protesters gathered in central Vienna during the debate on Thursday, marching along a major avenue, following demonstrations that attracted tens of thousands in recent weeks. Police cleared a security zone around parliament.

Herbert Kickl, the leader of the Freedom Party, pledged to stay unvaccinated.

Despite potential difficulties in implementing the mandate, the government hopes to further boost vaccination rates from about 72% of the population.

It’s now turning to a carrot-and-stick approach, announcing a lottery for the vaccinated with 500 euro ($568) handouts that are valid for hotels, restaurants and other services. Municipalities will also get progressive state grants after reaching vaccination rates of 80%, 85% and 90%, respectively. 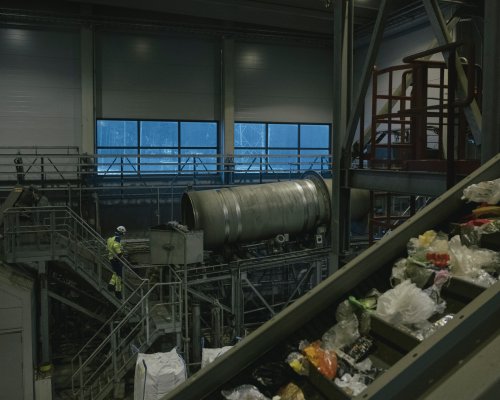 Inside Finland's Plan to End All Waste by 2050
Next Up: Editor's Pick