Historical Drama Munich: The Edge of War Is the Ultimate Dad Movie—In the Best Way

Dad movies, at least among those who aren’t actual dads, tend to be undervalued pleasures; they pluck a certain satisfying, resonant chord, often without being particularly flashy. Munich: The Edge of War, directed by Christian Schwochow and adapted from Robert Harris’ 2017 novel, is the ultimate dad movie: its setting is the 1938 Munich conference in which European leaders met with Hitler in an earnest, if naive, attempt to stave off war. That part really happened. The more intimate story Munich weaves around that event—involving two young men, one German and one English, who attempt a risky plot to stop Hitler—is largely fiction. Yet the made-up narrative melts seamlessly into the historical one. If the movie is handsome in an oak-paneled-office way, there’s life in it too. You feel there’s something at stake for the two young would-be heroes, as there is for the world.

Munich opens in 1932, at a champagne-fueled Oxford University garden party. Three friends gambol drunkenly on the lawn, noisy in their adamant youthfulness. One of them, whose slight accent marks him as someone-not-from-England, expresses his excitement about going home to what he calls the new Germany. His girlfriend, also German, protests that it’s a nation “of thugs and racists.” Their mini-argument ends with a flurry of sozzled kisses, but you know there’s trouble in this paradise. The third friend, who is English, teases them with amused annoyance, though he’s unsure of what to make of his best friend’s belligerent devotion to the fatherland. He also, it seems, likes the girl.

Fast-forward six years, and the young Englishman, Hugh (George MacKay, putting his scrubbed-clean innocence to good use), is a husband and father stuck in a demanding job as a secretary to Prime Minister Neville Chamberlain (Jeremy Irons, buttoned-up and terrific). At that point, plenty of people in power are still underestimating Hitler, and Chamberlain isn’t too worried. As Irons plays him, at least until the movie’s swerving finale, this PM is a likable doofus, certain that any problem can be solved with a handshake and a cup of tea.

Even so, Hugh sees that war is coming. And over in Germany, his old school friend Paul (Jannis Niewöhner, thoughtful-looking in a matinee-idol way) has an even better idea of how horrible and far-reaching that conflict might be. He’s now part of a resistance group plotting to stop, and maybe even kill, Hitler. The girlfriend—her name is Lenya, and she’s played by the marvelous, somber-eyed German actor Liv Lisa Fries, from Babylon Berlin—is nowhere on the scene; we’ll learn of her sad fate later. Paul and Hugh haven’t spoken in years, as Paul’s increasingly bullish nationalistic beliefs became too much for Hugh to bear. But when Paul comes into possession of a top-secret document—-it’s slipped to him by his secretary and lover, Mrs. Winter, played wonderfully by the sly German actor Sandra Hüller-—he and his old friend cross paths again, now united in a plan that seems as doomed as it is urgent.

Not everything in Munich is particularly subtle. Now and then you’ll hear a character note with alarm, “Hitler mobilizes tomorrow!” And the actor who plays the man himself, Ulrich Matthes, is a little too gaunt to convey much robust, dangerous charisma (even if his eyes do radiate a certain magnetic madness). But the movie gives a sense of what it’s like to be a human perched on a particularly sharp ledge of history. And its fictional elements spring from seeds of reality: Harris has said that Paul’s character was inspired by the anti-Nazi German diplomat Adam von Trott zu Solz, executed in 1944 for his role in Claus von Stauffenberg’s failed plot to kill Hitler. Even if Paul doesn’t suffer the same grim fate in Munich, its certainty hangs over him like a tense shadow. Sometimes the things you don’t see in a movie are as effective as those you do. 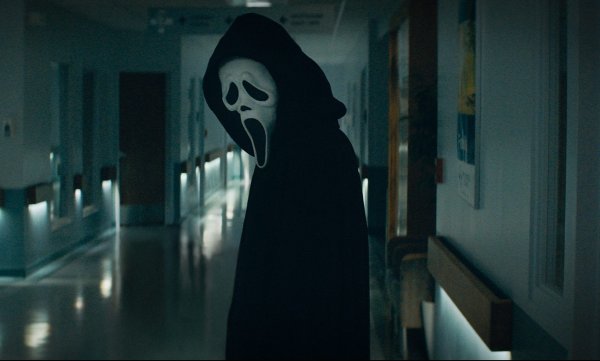 A Spoiler-Filled Breakdown of the New Scream
Next Up: Editor's Pick