North Korea's leader Kim Jong Un before a meeting with US president Donald Trump in the demilitarized zone (DMZ) on June 30, 2019.
BRENDAN SMIALOWSKI/AFP via Getty Images
By Iain Marlow and Jon Herskovitz / Bloomberg

Kim Jong Un signaled he may end a four-year-old freeze on major weapons tests, threatening to ratchet up tensions with the U.S. and force North Korea’s nuclear program back onto the Biden administration’s agenda.

Kim ordered ruling party leaders Wednesday to “promptly examine the issue of restarting all temporarily suspended activities,” state media said, in an apparent reference to the moratorium he started ahead of unprecedented talks with former President Donald Trump. North Korea must reconsider its “trust-building measures” and begin “immediately bolstering more powerful physical means, which can efficiently control the hostile moves of the U.S.,” Kim told the Workers’ Party meeting, according to the official Korean Central News Agency.

While North Korea has fired off sporadic volleys of short-range rockets for more than two years, Kim hasn’t launched an intercontinental ballistic missile since November 2017 or tested a nuclear bomb since September of that year. The lack of tests of weapons that directly threaten the U.S. mainland has made it easier for President Joe Biden to avoid another confrontation with Kim, like when Trump threatened to unleash “fire and fury” against the regime.

The meeting in Pyongyang represents the clearest sign yet that Kim is moving to end his self-imposed isolation after rejecting overtures from the U.S. and South Korea and closing his border with China to prevent coronavirus outbreaks. Forcing a crisis with Washington may be the 38-year-old leader’s best chance to break a diplomatic stalemate that has kept crippling sanctions in place and left the economy smaller than when he took power a decade ago.

South Korean defense stocks rose after the statement, with Victek Co. jumping as much as 9.3% to its highest level since Sept. 17. Korea Aerospace Industries Ltd. gained as much as 6.2% while Hanwha Aerospace Co. was up 4.5%.

North Korea has already in January conducted the most ballistic missiles tests in a month since 2019, while promising a “stronger and certain reaction” to a fresh round of U.S. sanctions against people accused of securing materials for the regime’s weapons program. In the past week, North Korea resumed rail-borne trade with its biggest benefactor China, in another sign it needs outside help.

“One of things we don’t know is just how dire the food, economic and health situation is inside the country right now,” said Scott Harold, a senior political scientist with the Rand Corp. who specializes in North Asia security policies. “If what’s behind the reality is that they are really, really suffering, that Kim fears he’s losing control and the only way out is an ‘escalate to de-escalate’ scenario, you can imagine that something that looks to the outside like a risky scenario could be something that might appeal to the young leader.”

The U.S. has sought United Nations Security Council action over North Korea’s missile tests, which violate the body’s resolutions. On Wednesday, U.S. Deputy Secretary of State Wendy Sherman condemned the tests and, during a call with South Korean counterpart Choi Jong-kun, expressed support for a return to talks. The tensions ensure North Korea will be high on the agenda during South Korea’s presidential election planned for March 9.

Ankit Panda, a senior fellow in the nuclear policy program at the Carnegie Endowment for International Peace, said Kim was likely using the latest U.S. sanctions as an excuse to resume testing of new and yet-unproven weapons. Those include what’s believed to be the world’s largest road-mobile ICBM, which North Korea paraded through Pyongyang in October 2020.

“Kim’s giving himself some flexibility, but is laying the groundwork for a resumption of long-range missile testing,” said Panda, who also wrote “Kim Jong Un and the Bomb: Survival and Deterrence in North Korea.” “They were bound to get back to testing longer-range missiles at some point.”

The new ICBM could allow North Korea to pack multiple atomic weapons on a single rocket in an attempt to overcome the missile shields that protect the U.S. mainland. Kim has also displayed medium-range missiles, such as Pukguksong-4 and Pukguksong-5, that appeared designed to be launched from either land or sea and potentially have ranges to hit all of Japan.

Other potential actions include a satellite launch or firing a missile over Japan, something North Korea hasn’t done since September 2017. Detonating another nuclear bomb would be even more provocative, although it’s unclear where such tests could be conducted after Kim dismantled the underground facility used for the country’s previous six tests.

“Kim’s ultimate goal is to lift sanctions,” said Cha Du-hyeogn, who was a security adviser to former South Korean President Lee Myung-bak and now is a visiting research fellow at the Asan Institute for Policy Studies. “If he doesn’t see that, he is most likely to accelerate his nuclear capabilities designed to target the U.S. mainland, which would be in turn boost his negotiating power against Washington.”

North Korea long ago restarted some “temporarily suspended activities,” such as restarting plutonium-producing operations at its main Yongbyon nuclear site and expanding a plant that enriches uranium for weapons.

“While this is more strongly worded than past formulations, it still leaves room for Kim Jong Un to ratchet up or lower rhetoric as he sees fit,” said Jenny Town, a senior fellow at the Stimson Center and the Director of Stimson’s 38 North Program. “It’s a strong response to the recent sanctions, as you would expect from North Korea.” 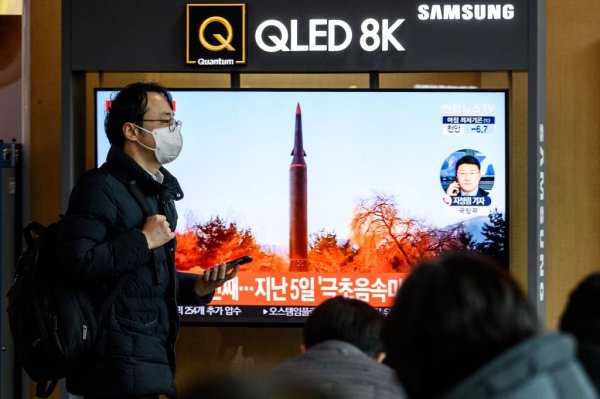