When the 380-foot-long Suiso Frontier set sail from Australia on Friday, bound for Japan with liquid hydrogen in its insulated hold, it marked the first time that liquified hydrogen has been transported by sea to an international market, according to project participants.

Experts say that it’s an important milestone for hydrogen—a fuel that several major economies have pinned their hopes on to help them decarbonize. It proves that the supply chain works, they argue, and will kick off international trade in the commodity.

“Australia’s first hydrogen liquefaction facility and ship loading terminal, the world’s first liquid hydrogen carrier ship, and a hydrogen unloading and storage facility in Kobe, Japan,” have been developed so far, says Jeremy Stone, a non-executive director of J-Power. The Japanese utility company runs a hydrogen-producing facility in the Latrobe Valley in the Australian state of Victoria. “We’ve proven a lot of things that pretty much all hydrogen projects can utilize,” he tells TIME.

But there’s one catch: the project uses brown coal (also called “lignite”), a high-emitting energy source, to produce the hydrogen. In fact, almost all of the hydrogen used today is made from fossil fuels. Developing “green” hydrogen, produced when renewable energy (like wind and solar power) powers an electrolyzer to split water into hydrogen and oxygen, is a key priority for places like the U.S., China, the E.U., Japan and South Korea. But green hydrogen isn’t commercially viable yet.

The Hydrogen Energy Supply Chain (HESC) project, which has been funded by the Australian and Japanese governments, produced the hydrogen being shipped to Japan from lignite and biomass at a newly constructed gasification plant. It was then trucked to a liquefaction facility in the port of Hastings, where it was cooled to -253°C, liquifying it to less than 800 times its gaseous volume. Then it was loaded onto the specially-designed ship—with a vacuum-insulated, double-shell storage tank, reminiscent of a gigantic coffee thermos—built by Japan’s Kawasaki Heavy Industries.

Francois Aguey-Zinsou, a professor at the University of Sydney who is an expert on hydrogen technology, says there are several technical challenges in shipping liquid hydrogen—like needing a very well insulated vessel to keep the hydrogen at the right temperature, with a low leakage rate, so it doesn’t escape.

Some of the hydrogen will need to be vented so the pressure in the vessel doesn’t cause it to burst. Then there’s the loading and unloading. “How do you refill a boat with liquid hydrogen? You can’t pump hydrogen at -253°C. There are no pumps to do that at the scale required for shipping or to refill a ship in an effective manner,” he says.

Read More: Fossil Fuel Companies Say Hydrogen Made From Natural Gas Is a Climate Solution. But the Tech May Not Be Very Green

Eventually, the plan is for the emissions from burning coal in the Latrobe Valley facility to be collected via a process known as carbon capture and storage (CCS)—a technology that some climate experts have criticized as an expensive, far-fetched pipe dream. If that works, the project could help reduce global emissions by 1.8 million metric tons per year—about the same as taking 350,000 cars off the road, according to participants.

For now, the HESC is in its pilot phase, and the developers are buying carbon credits to offset the emissions it produces until the CCS phase starts operating. They plan to continue research and development to increase the amount of hydrogen that can be exported, and to run more test shipments.

The project also needs to obtain some regulatory approvals, find buyers for the hydrogen it produces, investigate business model options and improve the technology it uses to reduce costs. Commercial operations are expected to start sometime in the 2030s. If they go well, there are plans to link up with the CarbonNet CCS project. Currently under development, CarbonNet would capture emissions from burning coal, compress them and store them deep under the Bass Strait, which separates mainland Australia and Tasmania.

The potential of the HESC project

As countries attempt to reduce their carbon emissions in order to meet global climate goals, hydrogen is increasingly becoming an important fuel source. At least 17 governments have released hydrogen strategies, according to the International Energy Agency (IEA), and the International Renewable Energy Agency (IRENA). The Abu-Dhabi based intergovernmental organization recently published a report that found hydrogen could cover up to 12% of global energy use by 2050.

Experts say that the shipment of liquid hydrogen is an important milestone for hydrogen technology. Although others are working on ways to transport hydrogen and it has been shipped in other forms, this is the first time that “pure” hydrogen has been shipped. “Nobody has done that at scale before,” says Aguey-Zinsou.”It’s a big deal. Obviously it is [currently] not economically viable, obviously there are a lot of technical challenges, but what HSEC is doing is actually creating the market,” he says.

Clean energy advocates want to see Australia transform itself from a top coal and liquified natural gas (LNG) exporter into a renewable energy superpower, and they hope that Australia will use its sunny skies and windswept coastlines to generate renewable energy that can produce green hydrogen. The country is aiming to become a “major player” in global hydrogen production and trade by 2030, and it is one of the best placed in the world to become a leading clean hydrogen producer, according to an IRENA report.

Members of the media in front of the Suiso Frontier liquid hydrogen carrier at the Port of Hastings in Hastings, Victoria, Australia, on Friday, Jan. 21, 2022.
Carla Gottgens/Bloomberg via Getty Images

Japan is already Australia’s biggest buyer of LNG and coal and, as Japan looks to decarbonize, HESC project participants say that it’s important for Australia to show it can step up to supply new energy exports. The country needs to make sure it’s competitive and reliable, as other countries may be vying for the same hydrogen supply chains, Stone says.

Hydrogen is especially important for Japan, which currently relies on imported fossil fuels for almost 90% of its energy needs. It was the first country in the world to release a national hydrogen strategy in 2017 and—given the backlash against nuclear fuel in the wake of the 2011 Fukushima nuclear disaster—plans to use hydrogen for electricity generation, steel-making and petrochemical production. It wants to have 200,000 fuel-cell vehicles, which are powered by hydrogen, on the road by 2025.

Japan played a pivotal role in the use of LNG by opting to import the fuel more than 50 years ago, with Kawasaki Heavy Industries becoming a major LNG tanker producer. Now, government authorities and the company appear to be partnering up on a similar plan for hydrogen.

Japan is positioning itself to “control key components of the hydrogen economy,” says Aguey-Zinsou. “They see the potential market growth and economic benefit. Beyond just importing hydrogen from Australia, you have all the technology behind that, all the various parts, bits and pieces that are needed to make that economy happen. It’s like Taiwan and the control of [semiconductor] chips.”

Not everyone believes the HESC project is the climate-friendly endeavor it purports to be. Critics note that it relies on unproven CCS technology, and argue that it will create new uses for fossil fuels at a time when the world should be transitioning away from them.

Although the IEA says that it will be “virtually impossible” to reach net zero without using CCS technology, some climate experts say CCS will never be affordable enough to make it an effective tool to reduce emissions.

Stone says that even if people don’t agree with their approach, the infrastructure they build can be used to transport green hydrogen in the future.

But some climate experts disapprove of Australia’s hydrogen plans more broadly, regardless of any future plans to make the production of the fuel a zero-emissions endeavor. According to an analysis by the Center for Strategic and International Studies (CSIS) think-tank, the Australian government’s hydrogen strategy is “more focused on economic goals than it is on climate goals.”

The country has certainly dragged its feet on climate action, and has faced criticism for its refusal to shift away from coal and gas.

“Zero-emissions hydrogen [produced from renewable energy] represents a really, really significant opportunity for Australia,” says Baxter. “Unfortunately, the Australian government—in its dash for hydrogen—is sort of taking an approach that all hydrogen is a good thing.” 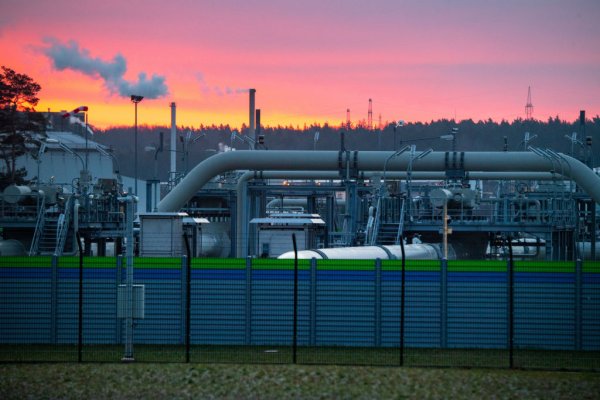 Russia Tensions Could Push Europe to a Clean Energy Future
Next Up: Editor's Pick