Magawa the Landmine-Sniffing Rat Was an International Hero. His Work Is Far From Over

Magawa, an African giant pouched rat, was given a rat-sized People's Dispensary for Sick Animals (PDSA) Gold Medal in September 2020 for his work clearing out mines. Magawa passed away in January 2022.
Courtesy of PDSA
By Chad de Guzman

Magawa, an African giant pouched rat, was likely never aware of his legacy. He sniffed out more than 100 landmines and other explosives in Cambodia during his five years with the Tanzania-based international charity APOPO, allowing them to be safely removed.

Magawa died Jan. 8 at age 8, about six months after being retired from mine hunting.

For his work, he was given a gold medal by the British veterinary charity People’s Dispensary for Sick Animals (PDSA) in 2020—the highest civilian award an animal can receive, and the first time a rat received such an honor. PDSA said that at the time, he was able to make 35 acres of land safe and livable for Cambodians. The award turned Magawa into an international hero.

Magawa was one of hundreds of “hero rats” that have been trained since the 1990s by APOPO to detect landmines. In 30 minutes, these rats can scan swathes of land as big as tennis courts for any presence of explosive chemicals. A human being with a metal detector will take four days to do the same job. While other animals can be trained to detect mines, APOPO found rats best suited for the job due to their small size—weighing less than three pounds, they are too light to set off the landmines.

Magawa and other African giant pouched rats are trained for nine to 12 months to sniff out landmines. Because of their light weight, they won't trigger a mine if they happen to run over one.
Courtesy of APOPO

But Magawa’s fame helped introduce the world to the life-saving work rats are doing, and served as a reminder to the ongoing threat of landmines in many places.

“He has been kind of an ambassador for APOPO highlighting our work,” the organization’s chief executive, Christophe Cox, says. “We get reactions from the smallest, unthinkable villages in every corner of the world, so that is important—not only for us, but also for the people affected by landmines, in Cambodia and elsewhere.”

Marred by decades of civil war until the late 1990s, the Southeast Asian country is among the heavily land-mined nations in the world: A report from Cambodia Mine Action Authority in July 2021 found that undetected explosives have killed and injured some 65,000 people since the Khmer Rouge’s bloody regime fell in 1979. A variety of factions, including the Khmer Rouge, Vietnamese forces and the U.S. military, laid these mines across the country during the war, and many still remain. Cambodia has the highest per capita number of mine amputees in the world, with more than 40,000, the PDSA said.

APOPO’s program in Cambodia has so far detonated 6,400 landmines. But the Cambodia Mine Action Authority reports that there’s still more than 300 square miles of land still contaminated by mines, while 275 square miles still has unexploded cluster munitions and another 200 square miles has other explosive remnants of war.

Cambodia is just one of the 59 countries across the world where uncleared mines pose a threat to communities, APOPO says. Other countries such as Zimbabwe, Angola, and Mozambique are also facing mine clearance problems.

Cox believes Magawa’s international fame may help secure additional funding for the organization to continue its work. According to Cox, most of the organization’s funding comes from foundations, while the rest comes from public support through “adoptions” of mine-clear rats, government support and research grants.

Magawa’s stellar record made him one of the top rats put up for “adoption”—a means for the organization to generate more funding for training other rats, as well as investing in research and development.

With more funding, Cox says the organization could research new uses for the rats’ incredibly sensitive noses, including sniffing out smuggled illegal wildlife products, detecting soil contamination and even discovering survivors buried under rubble in times of disaster.

But APOPO’s work is already cut out for it in removing mines in Cambodia, Cox says. The nation of 17 million—as a signatory of the Ottawa convention which bans the use, stockpiling, production and transfer of anti-personnel (AP) mines—only has until Dec. 31, 2025 to clear its lands of the explosives—remnants of a war that continues to claim lives of unsuspecting residents until today.

Earlier this week, local media reported that three mine removal experts died and one sustained serious injuries when an anti-tank mine exploded in a village in the northern Cambodian province of Preah Vihear. The victims were aged between 26 to 32 years old.

“The people there who are now affected by landmines, they were not even born by the time [the mines] were laid,” Cox says. 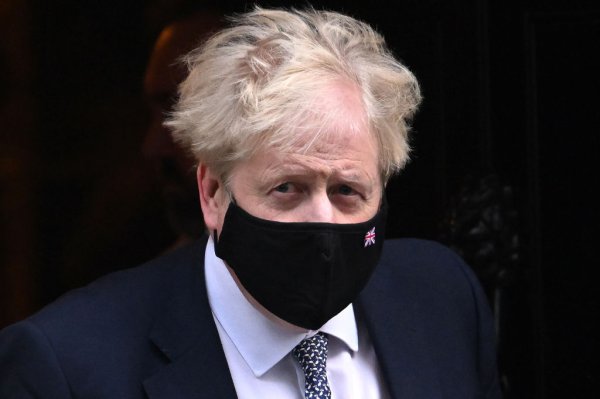 U.K.'s Johnson Apologizes for Attending Party During Lockdown
Next Up: Editor's Pick