A man walks past a television screen showing a news broadcast with file footage of a North Korean missile test, at a railway station in Seoul on Jan. 11, 2022, after North Korea fired a "suspected ballistic missile" into the sea, South Korea's military said.
Anthony Wallace–AFP/Getty Images
By Alan Levin/Bloomberg

Flights out of some airports on the U.S. West Coast were briefly halted by aviation regulators as a precaution on Monday after North Korea launched a high-speed missile in a test.

The so-called ground stop, which paused departures from an unspecified number of airports, lasted less than 15 minutes.

North Korea’s missile flew at almost 10 times the speed of sound into waters off its eastern coast, ratcheting up tensions in the region and with the U.S.

The Federal Aviation Administration issues ground stops routinely to ensure airports and high-altitude flight paths remain orderly. They can occur for weather, volcanic eruptions or any number of reasons. On Monday afternoon, for example, the FAA ordered a brief halt to flights in the central region of the U.S. as a result of aircraft volume related to the college football championship game in Indianapolis.

While they didn’t recall prior halts on U.S. flights related to a North Korea launch, two experts in air traffic said it wasn’t surprising that the FAA and the U.S. military had a system in place to raise alerts for such events.

The air-traffic system is built to handle unusual situations that might put planes in peril, said Dave Canoles, a consultant who formerly served as FAA’s director of air-traffic safety oversight. If there are any doubts, controllers and managers are trained to slow down the flow of planes until they can better understand the risks, Canoles said.

“It shows that the overall system is monitoring and attuned to world events,” said John Hansman, a aerospace professor at the Massachusetts Institute of Technology. “The overall harm is low” to halting flights for a short period, Hansman said.

White House Press Secretary Jen Psaki addressed the FAA action during a briefing Tuesday. “I believe it was a 15-minute ground stop and they did it out of an abundance of caution and they were going to be assessing their approach moving forward,” Psaki said.

The FAA didn’t immediately respond to questions about whether it has halted flights before as a result of North Korea missile launches.

“We are reviewing the process around this ground stop as we do after all such events,” the agency said in the statement.

The military’s U.S. Indo-Pacific Command issued a statement Monday night that the launch didn’t “pose an immediate threat to U.S. personnel or territory.”

—With assistance from Justin Sink. 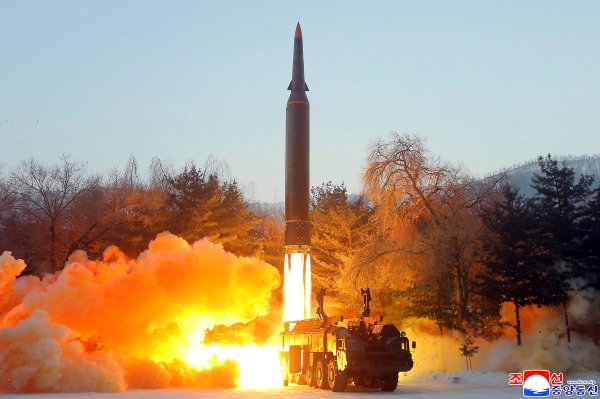