If Anyone Can Talk Russia Out of Invading Ukraine, It's Probably Wendy Sherman

In Wendy Sherman’s world, rationality rules. For the Deputy Secretary of State, the players look at the field as it is set, weigh risk and reward, concessions and consequences and then make the best choice for their self-interest. Sentimentality and nostalgia are for suckers. When the parties enjoy a common understanding of the carrots and sticks, ultimately a logical ending comes to pass—even if it doesn’t always translate into a clear political win back home.

That may be how the former social worker-turned-campaign operator has cracked some of the toughest negotiations to cross the State Department’s cables in the past three decades. Her reputation as a steely master of tough talks is as deserved as the (sometimes begrudging) respect she gets from Republicans on Capitol Hill. Sherman hammered out deals with North Korea during the Clinton era and with Iran during the Obama years. Now the nation’s number-two diplomat is in talks with Moscow this week, looking for a way to de-escalate the scene unfolding on the Russian-Ukrainian border, where 100,000 Russian troops currently surround Ukraine on three sides under the pretense of routine exercises.

“One doesn’t normally send 100,000 troops to a border just to sort of exercise,” Sherman deadpanned in Geneva on Monday.

Ultimately, Russia—like the United States—has an obligation to act in its own self-interest. And in this case, as in most cases, Russia is Vladimir Putin, whose singular order can activate the military’s mobilization across the Ukrainian border and test the West’s response. Sherman’s goal for the week is to convince her Russian counterpart that that’s a bad idea. A very bad idea, she told Russian Deputy Foreign Minister Sergei Rybakov over dinner Sunday and during eight marathon hours of talks on Monday in Geneva, a city she knows all too well from extended talks with Tehran over the Iran nuclear deal in 2015.

Sherman’s realpolitik approach demands that she try to occupy the minds on the other side of the negotiating tables. And in this case, having negotiated the disposal of Syria’s chemical weapons program with Rybakov during the Obama Administration, she has some clues about what he has to say on orders from Putin and what he actually believes.

“As a diplomat and negotiator, I generally don’t approach these kinds of situations on the basis of trust. I do try to respect that other countries have their own interests and those interests may be different than ours, and to try to gain an understanding of them,” Sherman told reporters via phone from Geneva.

That—and a meticulous attention to detail—has been a guiding theory for Sherman’s career, dating to her work as a Baltimore social worker trying to improve access in the city to affordable housing. After stints as a Hill aide, Democratic National Committee staffer and chief of EMILY’s List, Sherman’s ear is one of the most politically attuned in Foggy Bottom, standing apart from much of the career staff at the State Department. Where they have PhDs and decades of narrow focus, she has the hard-earned calluses from working in politics—and, as such, a sharp mind for getting even the most hostile parties to yes. The history and culture are important, but winning ultimately relies on understanding how the chase of power is perceived in delicate talks. “A realistic sense of one’s own power,” she wrote in 2018, is necessary to dealing with those who may disagree.

In the 1990s, after stints as the State Department’s liaison to Congress and the CEO of Fannie Mae’s charitable arm, she returned to State as Madeleine Albright’s counselor in a minister-without-portfolio role. From that post, she coaxed the reclusive North Korean regime to commit to a temporary moratorium on its nuclear program; Albright rewarded the concession in 2000 by becoming the most senior American to visit the country since the fighting on the peninsula ended in 1953. (There were plans of dispatching Bill Clinton before his term ended, but talks fell apart in the chaotic transition of the 2000 presidential election.)

After subsequent stints teaching and consulting at Abright’s global advisory firm, Sherman returned to State as its Undersecretary for Political Affairs, the Department’s No. 4 job. Working for Secretaries Hillary Clinton and John Kerry, she successfully leveraged a multilateral deal with Iran to dramatically scale back its nuclear ambitions in a tough 20-month series of talks that had plenty of skeptics stateside. “No deal,” she told the Senate in 2013, “is better than a bad deal.”

Her most recent public success in that deal was not without deep frustrations. At one point, three weeks into what was supposed to have been a quick trip to Geneva, she snapped and started to tear up in a private meeting when her Iranian counterparts wanted to reopen an agreed-to point. Stunned after seeing the hard-nosed negotiator in action for over a year, the Iranians realized how personally Sherman was taking the talks and dropped their objections—and the Iran nuclear deal clicked into place. (Donald Trump, of course, saw the deal as a relic of Barack Obama’s presidency and naturally quit it, saying he would negotiate a better deal. He did not.)

Iran needed the U.S. to ease sanctions more than Russia does now, making her current task more difficult. Sherman is now in Brussels for meetings with NATO and heads at the end of the week to Vienna for talks with the Organization for Security and Co-operation in Europe. She knows the route and the players well—and they know her as a tough diplomat who seldom refuses to allow no be the last word at any table. But she’s also not missing the danger of getting it wrong: “As for hope for future discussions, it’s very hard for diplomats to do the work we do if you have no hope,” she said Monday. “So of course I have hope—but what I care more about is results. 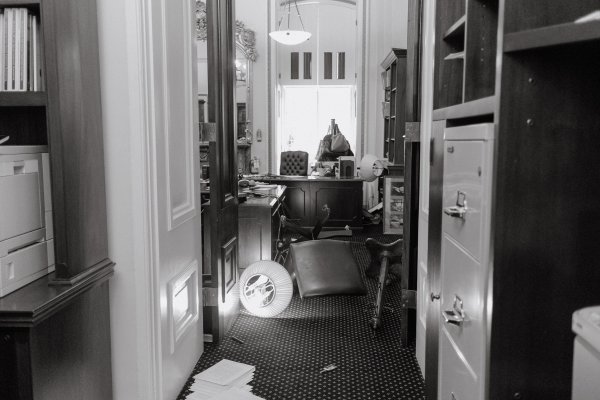 Why America Needed a 9/11 Style Commission for Jan. 6
Next Up: Editor's Pick