The viewing experience of the first season of the Netflix show Cheer was built on an exciting sense of momentum. The docuseries, which follows an elite cheerleading team at Navarro College in Corsicana, TX, spent the entire season building toward the climactic finale at a national championship. Season 2 of Cheer also builds toward something, but the excitement of the prior season is, for much of the season, replaced with a sneaking feeling of dread.

In addition to focusing on the Navarro athletes, this season of Cheer also spotlights Trinity Valley Community College (TVCC), a rival school near Navarro that has a similarly intense cheer program. When the show opens, both schools are moving ahead full throttle, preparing to face off against each other at the NCA National Cheerleading Championship in Daytona, Fla. Of course what the audience knows, but the students practicing their pyramids in the gym in the early months of 2020 don’t yet know, is that the COVID-19 pandemic will soon send their pyramid tumbling, canceling the event in Daytona two weeks out, and abruptly ending the cheer careers of several stars.

But this accounts for only part of the dread. In September 2020, Navarro athlete Jerry Harris, the gregarious fan favorite in Season 1, was arrested on federal charges of production of child pornography and, later, sexual exploitation. The filmmakers shy away from cheap shock value regarding the case. Instead, they dedicate a whole episode to addressing Harris, focusing not just on his alleged crimes or the reaction from his teammates, but on the honest and horrifying testimony from two teenage twin boys whose accusations kicked off the investigation against him.

Read More: Cheer Shows Competitive Cheerleading Is Almost as Dangerous as Football. So Why Isn’t It Officially Considered a Sport?

There is a meta aspect to this season of Cheer, as the show addresses itself in a manner uncommon in documentaries. The cheerleaders and coaches confront the publicity they’ve experienced since being on the show; there are clips from The Ellen DeGeneres Show and the Today Show that demonstrate how the cast, and especially Harris, rose to fame. It’s a complex feat to pull off, but director Greg Whiteley is adept at the slow burn.

This season of Cheer ultimately feels like two seasons packaged as one. The first half concludes with the arrival of the pandemic and the arrest of Jerry Harris. The second half mostly goes back to the normal routine of cheerleaders building up their routine ahead of the 2021 competition, though the team is noticeably more emotionally exhausted by this point.

At its worst, Season 2 of Cheer rehashes the same beats it did in Season 1 (intense competitive drive, heart-wrenching backstories). But at its best and most potent, Cheer is unlike any documentary in recent memory. It shares the brutal honesty of two teens who came forward with accusations of sexual assault, and contends with the complex cocktail of emotions that comes with people learning that their beloved friend is the one accused of inflicting abuse behind closed doors.

How does Cheer Season 2 address the elephants in the room?

The first season of Cheer premiered in January 2020 as a documentary series covering a cheerleading squad in small-town Texas, and the tough-but-caring coach who managed them. Most viewers had never heard of Navarro College, Corsicana, TX, or coach Monica Aldama. But going into Season 2, Aldama is a celebrity—at least a big enough one to appear on Dancing With the Stars (she also came out with a book, Full Out, earlier this month). Several of the cheerleaders who appeared on the show exceed a million followers on Instagram and make money filming Cameo videos in their spare time. They’re no longer constrained to the insular fame of the cheer world.

It’s common among reality shows for the stars to grow exponentially more famous between the first season of the show and the rest of the series. When a show like Selling Sunset or Real Housewives is in its infancy, the stars are not yet famous, and have not yet become self-aware in the face of newfound attention. Because Cheer is a documentary, the people in it are subjects, not stars—though that line gets easily muddied once fans start tracking their lives in and out of the series. Regardless of her 1.8 million followers, though, Gabi Butler still has to go to practice and get her stunts in order.

Read More: How Docu-Mania Took Streaming by Storm, From Tiger King to WeWork

But the show also addresses its subjects’ fame in a way not often seen on TV. There is no fourth wall. The filmmakers frankly reveal how fame has impacted the most prominent cheerleaders, and how the cheerleaders who weren’t featured on the show feel about it. During practice, Monica huddles with La’darius Marshall to discuss an upcoming press trip and advises Morgan Simianer on doing an ad for Buick. One day, two young girls, dressed in mini Navarro uniforms, eagerly wait outside the gym for the cheerleaders to arrive for practice so they can collect autographs and take photos.

It’s deeply uncomfortable watching these same markers of fame—endorsement deals, screaming young fans, appearing onstage with Oprah—in the case of Harris, who has been in federal custody since September 2020 as he awaits trial. Through the first few episodes of this season, Cheer treats Harris mostly like any of the other cheerleaders on the squad, so as to keep the timeline chronological.

The fifth episode of this season, titled “Jerry,” is dedicated entirely to the allegations against Harris and the fallout his team experiences. But it also heavily centers two of his accusers, twin brothers Charlie and Sam, who accused Harris of sexual harassment and of soliciting nude photos beginning when they were 13.

Cheer doesn’t go into any depth about the allegations beyond the “Jerry” episode, nor does it continue to focus on the fame Jerry acquired following Season 1. Instead, it finds new material by delving into the lives of a whole new crew of cheerleaders who are far removed from any scandal or drama that came before them.

Which standouts from Season 1 return?

Everyone had their favorite Navarro cheerleader from Season 1 of Cheer, but not all of the teammates returned for Season 2. Navarro College is a community college, which generally takes two years to complete, so some students who appeared on the first season, like Mackenzie Sherburn a.k.a “Sherbs,” have simply graduated or moved on to four-year schools. Other cheerleaders have been at Navarro for more than two years, which the show doesn’t really explain aside from the fact that they want to continue cheering. Gabi Butler, La’Darius Marshall, Lexi Brumback and Morgan Simianer all return for at least part of the season. Harris is also on the team for part of the season, though not featured heavily due to the allegations against him.

This season of Cheer is split into two unofficial parts as it covers two college cheering seasons: the 2020 season cut short by COVID-19, and the 2021 season happening during the pandemic, and after the public allegations against Jerry Harris.

Many of the students graduate or quit the team after the 2020 season, but a few, including Butler, continue for the rest of the season. Coach Aldama remains the ringleader of the team, though she takes a leave of absence in the fall of 2020 to compete on Dancing With The Stars, much to the chagrin of some of her students.

Who does the show focus on in Season 2?

There’s a limit to how much documentary material you can mine from one college cheerleading team, so in season 2, the filmmakers begin following the cheerleaders and coaches from Trinity Valley Community College (TVCC), a school in Athens, TX, about 45 minutes from Navarro College. The schools are pitted against each other as rivals, not just because of their geographical proximity but because of their near-equal abilities. The two teams have been neck and neck with each other at the NCA National Cheerleading Championship for several years, including in the 2021 season.

This season introduces a new roster of cheerleaders from both Navarro and TVCC, with some clear standouts. At Navarro, there’s Maddy Brum, a highly dedicated cheerleader from outside Boston who’s mom describes her as a “townie.” Gillian Rupert is a more timid cheerleader who has the season’s most pivotal fall. Her best friend is Casadee Dunlap, a bubbly girl who appeared on Toddlers & Tiaras as a young child. There’s also an assistant coach and former Navarro cheerleader named Kailee Pepper who tries to take charge, with mixed results, while Monica is on Dancing With The Stars.

There are more standouts from TVCC, partly because everyone is new to viewers. Head coach Vontae Johnson, a former cheerleader at the school, leads the team like a tough uncle who’s not too much older than the students. His assistant coach, Khris Franklin, used to be the head coach before taking a break and coming back. He’s been involved in cheerleading for at least 20 years and has the advantage of also working as a cheerleading judge. Among the athletes, there’s Jada Wooten, a clear leader who gives her teammates notes on their form. Angel Rice is a powerhouse tumbler whose mom describes her as “the Simone Biles of cheerleading.” There’s a group of three (straight) male cheerleaders nicknamed “the weenies” for their reluctance to fully commit to the flamboyance of cheerleading despite their immense talent.

The season concludes with the 2021 championship in Daytona, a two-part finale with the palpable adrenaline and excitement of athletes who haven’t been able to compete in two years. It’s an uplifting shift from the first half of the season, and focuses more on the cheering and less on the impact of Cheer. There’s no word on whether a third season of Cheer will happen, or which subjects from the show will blow up like their predecessors, but if this season finds the same kind of viral audience as the first, it would hardly be surprising if more chapters of this story are yet to be told. 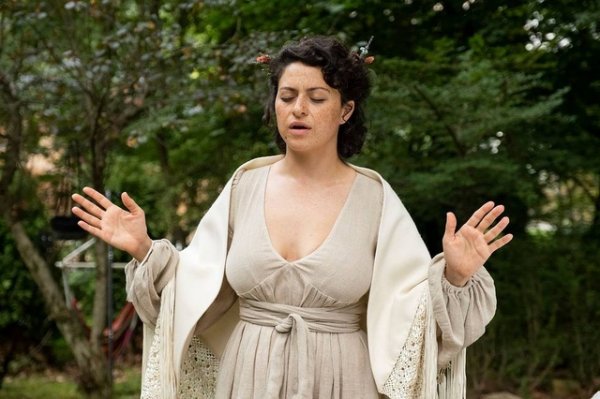 The More Bonkers Search Party Got, the More Authentically It Captured Millennial Adulthood
Next Up: Editor's Pick