With the omicron wave of the pandemic rapidly spreading across the U.S., the robust economic recovery is facing a new threat that policymakers have little control over: people calling in sick.

What started as a series of holiday flight cancellations as pilots and other staff fell ill or were forced into quarantine is becoming a reality in factories, grocery stores and ports and again testing supply chains.

The widespread absenteeism is already constraining output, and several economists began the new year by downgrading their first-quarter forecasts. Even if the hit is temporary, as most anticipate, the disruptions and closures are likely to slow the fragile rebound in some sectors and weigh on businesses’ future plans.

“You just don’t know when it’s going to hit you,” said James Beall, chief executive officer of the Washington, D.C.-area Ledo Pizza chain. On any given day last week, at least three of the company’s 110 locations were closed and as many as five were operating on reduced hours. “Our new normal is turning into another new normal.”

Just how bad or enduring the omicron toll will be may take weeks to determine. The December jobs report released Friday, showing an unemployment rate at a fresh pandemic low of 3.9%, relied on data gathered mostly before the variant spread. Even the January numbers, due Feb. 4, are unlikely to reflect the entirety of the impact, which is more likely to be measured in lost output due to sick days than lost jobs.

Nick Bunker, chief economist at online job-listing firm Indeed Inc., likens the impact of omicron to the blizzard of 1978, which dumped as much as four feet of snow on his native New England in less than 36 hours and yielded weeks of disruption but also a rapid recovery. Only unlike the blizzard and even previous waves of Covid-19, the variant has quickly become a national event, with new cases reaching as many as 1 million a day last week.

That means “this big, very, very large sharp shock to the economy and the labor market specifically. But then the hope is that, like a storm, it ends and then there’s a return to prior trends,” Bunker said.

“Things are only likely to get worse in the near term,” he wrote in a note to clients. Moreover, “the conventional wisdom that omicron presents no threat to the economy may prove too sanguine.”

Staff shortages have continued to disrupt airlines, with Alaska Airlines saying that an “unprecedented” number of workers calling in sick caused it to cancel 10% of its flights for the rest of January.

The real question for the industry is whether it will cause carriers to slow planned 2022 growth if it continues into February and beyond, said Conor Cunningham, an analyst with MKM Partners.

“My expectation has been that other airlines will need to slow growth,” Cunningham said.

Some hospitals are at a breaking point, dealing with more sick or exposed workers than at the worst of the pandemic.

“We’ve had more staff out because they’ve tested positive and have contracted Covid than we did at the very beginning,” said Lynda Shrock, vice president of human resources at Logansport Memorial Hospital in Logansport, Indiana.

On Rodeo Drive in Beverly Hills, luxury retailers Gucci, Hermes, and Louis Vuitton have all reported cases among staff, according to Los Angeles County’s public list of workplace outbreaks. Walmart Inc. has closed at least 60 of its U.S. stores for deep cleanings. Apple Inc. locations have been shut temporarily in dozens of places from Alabama to Florida and New York.

The backlogs of ships off the ports of Los Angeles and Long Beach, the nation’s busiest, are growing again, McKenna said. “This new variant is so transmittable that it has changed the game,” he said.

It may just be a matter time. In a call with reporters on Friday, Scott Keogh, chief executive officer of Volkswagen AG’s U.S. unit, said he was “100%” certain that the industry was about to face production disruptions due to omicron. “There is no flexible new normal” for assembling a car.

While economists and investors expect the impact to be short-lived, its magnitude may be sizable. Mark Zandi, chief economist for Moody’s Analytics, cut his first-quarter prediction for annualized gross domestic production to close to 2%, down from about 5%. But he also raised his forecast for the second quarter, saying businesses and the economy are better prepared to face this new wave.

“I don’t expect the virus to sustainably subtract from economic growth on net this year,” Zandi said. Though omicron could, he said, affect how the Federal Reserve views the recovery and when it acts to raise rates.

The variant is another blow to industries like hospitality that were struggling to come back to pre-pandemic employment levels, said Jerry Nickelsburg, faculty director of UCLA Anderson Forecast. That in turn will have a longer effect on growth because “those sectors will not recover as fast as we previously thought”.

Marshall Weston, president and chief executive officer of the Restaurant Association of Maryland, said he had spent the week fielding calls from members who were closing their doors for good.

“The recovery for restaurants appears to be going in reverse rather than moving forward,” Weston said.

At Ledo Pizza in the D.C. area, CEO Beall is determined to keep a company his grandfather started in 1955 alive. He employs 1,300 fewer people than before Covid-19 and has adapted by using more automated online systems to field takeout orders and by simplifying the menu to ease the burden of kitchen staff.

He’s also dealing with staff shortages at suppliers that have only gotten worse with omicron. That means getting smaller amounts of ingredients like mozzarella sticks and waiting longer to get them.

“We’ve seen a lot of in 66 years,” Beall said. “But this is definitely different.” 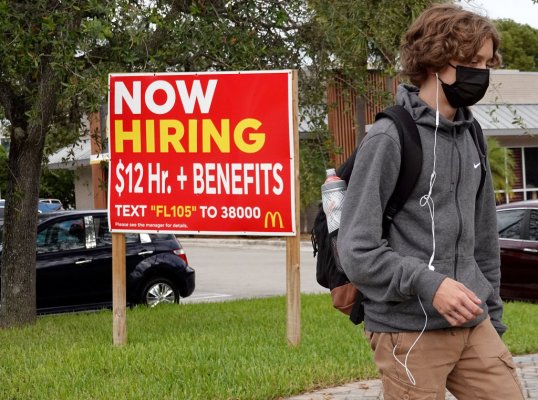 4 Charts That Explain the Wild U.S. Economy
Next Up: Editor's Pick