A year after the horrifying violence at the Capitol on January 6th, 2021, a simple partisan storyline crowds out a central driver behind the events. Most media are understandably tracking the January 6 Committee and Trump’s Republican accomplices, and many pollsters have focused on the growing partisan divides regarding Trump’s role in the events or whether rioters should be prosecuted.

Largely forgotten—unless we look back at countless photos and footage of the violence—are the Christian banners and flags, the wooden crosses, the impromptu praise and worship sessions, the “Jesus Saves” signs, the Christian t-shirts, and the infamous corporate prayer in Jesus name in the Senate Chamber. Having stormed the sanctum of American democracy, the “QAnon Shaman” thanked God for “filling this chamber with patriots that love you and that love Christ,” allowing them to send a message to their enemies “that this is our nation not theirs.”

For several years we’ve measured Christian nationalist ideology by asking Americans a series of questions like whether they believe the government should declare the U.S. a Christian nation, or whether they reject the separation of church and state, or whether they think America’s success is part of God’s plan. We call those who score roughly in the top 20% of our scale “Ambassadors” of Christian nationalism. They are the true believers. That is around 30 million adults. And our recent findings suggest they’re growing more accepting of the insurrection on January 6th.

In February 2021, we asked Americans for their thoughts about the Capitol riots. Then we queried those same Americans seven months later in August to see how their views shifted. Within that time, the percentage of white Ambassadors who felt the rioters should be prosecuted dropped over 22 points from 76.3% to 54.2%. Even more striking, the percentage of white Ambassadors who said they stood on the side of the rioters doubled from 13.6% to over 27%.

Why did these white Christian nationalists start to identify more with the rioters? Our August 2021 survey suggests several reasons. First is loyalty to Trump. Nearly 92% of white Ambassadors voted for him in 2020. And compared to roughly 36% of Americans who believe the Presidential election was stolen from Trump, nearly 2.5 times that percentage of white Ambassadors (86%) held this view in August.

But why are they still so convinced the election was a sham? In several studies we and other scholars have shown that Christian nationalism seems to incline white Americans toward baseless conspiracy theories. For example, in our August 2021 data we find that half of white Ambassadors believe falsely that the COVID-19 vaccines have themselves killed hundreds of people. And less than one third were willing to reject the outrageous QAnon conspiracy about government elites running a Satan-worshipping, pedophile, sex-trafficking ring.

Just as disturbing, white Christian nationalists are also isolating themselves within more homogenous social groups. New experimental research shows that the more right-wing Americans isolate themselves within communities who only share their moral worldviews, the more they express radical intentions and a willingness to fight or die for their group. Add to this the fact that white Americans who subscribe to Christian nationalism are not only increasingly getting their news from certain platforms and right-wing news sources but they are believing the narratives being shared.

Which narratives, you ask? Among the central unifying narratives within white Christian nationalist ideology is that of victimization. It’s not just due to demographic transitions their clear electoral majority is no longer a given, though research shows the threat of immigration and minority status does make whites more Christian nationalist. It’s that they genuinely believe they are persecuted. In our August survey, we gave Americans a list of social groups and asked them to pick which group faces the most discrimination these days. Nearly 76% of white Ambassadors said that either whites or Christians faced the most discrimination.

But what’s most troubling is where this could all lead. The trends we cited above show that white Americans who subscribe to Christian nationalism are warming up to the attempted insurrection, but does this portend more political violence? We think it could.

In our August 2021 survey we found roughly 46% of white Ambassadors agree “there is a storm coming soon that will sweep away elites in power and restore rightful leaders” and 40% agreed things have gotten so far off track in our country that “true American patriots may have to resort to physical violence in order to save our country.” Other polls report similar findings. For example, in their September 2021 survey, the Public Religion Research Institute (PRRI) found that roughly one third of whites who believe God granted America a special role in human history completely agreed that patriotic violence may be necessary to save the nation. Another poll shows a greater comfort with the use of force to achieve political ends among political conservatives

But there is reason for hope. First, multiple polling firms like Pew Research Center and PRRI are documenting that overt support for Christian nationalist views is declining in the general population. While white Ambassadors may drift toward more radical expressions of Christian nationalism following January 6th, the shocking footage and scrutiny toward such views may be causing a larger portion of Americans to draw sharper distinctions between the religious and political spheres.

Second, leaders who leverage reactionary religious rhetoric for political gain can be confronted. Deplatforming Trump and, just this weekend, Marjorie Taylor-Green, were positive steps because studies show deplatforming such actors can be effective. But Trump’s prominent evangelical allies like Robert Jeffress, surrogates like Michael Flynn, and other political disciples like Josh Mandel and Lauren Boebert continue to spout Christian nationalist rhetoric and conspiratorial propaganda to millions. Given the potential success of deplatforming, we must find additional avenues through which we can directly confront the explicit threat of white Christian nationalism, in our politics and our congregations.

Yet, we must also remember that the enemy isn’t religion, deeply religious citizens, or even the influence of religion on American politics. The vast majority of Americans are religious—Christian, in fact. The most devout of these Americans love their neighbors, enrich their communities, and value liberal democracy.

Rather than denounce any trace of religion in politics, we think it better to amplify the kind of religious expression that accomplishes democratic goals. Americans are right to be concerned about the threat of religious violence from an ethno-religious subculture that’s growing increasingly isolated and paranoid. But that group remains the minority. And they can be confronted with a sacred commitment to creeds that, at their best, unite all Americans regardless of ethnic or religious identity—legal equality, full democratic representation, freedom of speech, and, of course, religious freedom for all. 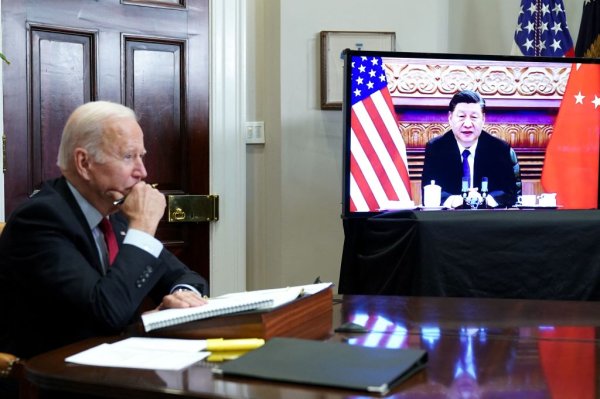 The Top Global Risks of 2022
Next Up: Editor's Pick