CAPE TOWN, South Africa — A major fire ripped through South Africa’s 138-year-old Parliament complex on Sunday, gutting offices and causing some ceilings to collapse at a site that has hosted some of the country’s pivotal moments. As firefighters struggled to tame the blaze, a dark plume of smoke and flames rose high into the air above the southern city of Cape Town.

Around 70 firefighters were still battling the fire hours after it started in the early morning, Cape Town’s Fire and Rescue Service spokesman Jermaine Carelse said. Some were lifted up on a crane to spray water on the blaze from above. No injuries have been reported and Parliament itself had been closed for the holidays.

Visiting the scene, South African President Cyril Ramaphosa said a person was “being held and is being questioned” by police in connection with the blaze. Police later confirmed a 51-year-old man had been detained.

“The fire is currently in the National Assembly chambers,” Minister of Public Works and Infrastructure Patricia de Lille told reporters as smoke billowed behind her from the roof of the historic white building with grand entrance columns. “This is a very sad day for democracy, for Parliament is the home of our democracy.”

“We have not been able to contain the fire in the National Assembly,” she added. “Part of the ceilings have collapsed.”

Authorities feared extensive damage to both buildings, which have stark white facades, elaborate roof linings and majestic columns, now all obscured by flames and smoke. There were also fears that priceless artifacts inside, including a manuscript where the composer first wrote some lyrics for South Africa’s national anthem, would be lost forever.

Carelse warned that both buildings were at risk of collapsing.

“The bitumen on the roof is even melting, an indication of the intense heat. There have been reports of some walls showing cracks, which could indicate a collapse,” the News24 website quoted Carelse as saying.

J.P. Smith, the Cape Town official in charge of safety and security, said at least one floor of the Old Assembly building was “gutted” and its entire roof had collapsed. The firefighters were now focusing efforts toward saving the National Assembly building, he said.

While the Old Assembly building was closely connected to South Africa’s colonial and apartheid history, the National Assembly building was where former President F.W. de Klerk stood up at the opening of Parliament in 1990 and announced he was freeing Nelson Mandela from prison and effectively ending the apartheid system of white minority rule. The news electrified the country and reverberated around the world.

Security guards first reported the fire at around 6 a.m. Sunday, Carelse said, and the 35 firefighters initially on the scene quickly called for reinforcements. Cape Town activated its Disaster Coordinating Team, which reacts to major emergencies. Police cordoned off the complex and closed nearby roads.

De Lille said an investigation was underway into the cause of the blaze. Authorities were reviewing video camera footage and questioning the man arrested at the precinct.

Parliament speaker Nosiviwe Mapisa-Nqakula cautioned against speculation that it was a deliberate attack on South Africa’s seat of democracy.

Ramaphosa and many of South Africa’s top politicians were in Cape Town for the funeral Saturday of retired Archbishop Desmond Tutu at St. George’s Cathedral, about a block away from the Parliament.

South Africans viewed the fire as a double blow on the first two days of the new year, after saying farewell to Tutu and then seeing their Parliament burn.

“It’s just really a terrible setback,” Ramaphosa said. “The Arch (Tutu) would’ve been devastated as well. This is a place he supported and prayed for.”

South Africa has three capital cities. Cape Town is the legislative capital, as Parliament is located there. Pretoria is the administrative capital where government offices are and Bloemfontein is the judicial capital and hosts the Supreme Court.

Cape Town has seen arson attacks before. A huge wildfire on the slopes of Cape Town’s famed Table Mountain last year spread to buildings below and destroyed part of a historic library at the University of Cape Town as well as other structures. A report concluded that fire was started deliberately. 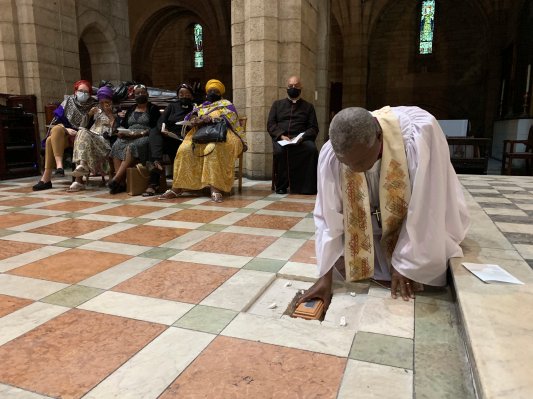