The Pandemic Changed How We Drink. It's Time to Go Back to the Joy of Social Drinking

04 December 2021, Baden-Wuerttemberg, Rottweil: Corks lie in a glass container in a wine shop for Italian wines.
Silas Stein-picture alliance
Ideas
By Edward Slingerland
Slingerland is the author of Drunk: How We Sipped, Danced, and Stumbled Our Way to Civilization. He is also the Distinguished University Scholar and Professor of Asian Studies at the University of British Columbia, with adjunct appointments in Psychology and Philosophy, as well as Co-Director of the Centre for the Study of Human Evolution, Cognition and Culture and Director of the Database of Religious History.

One of the greatest foci of human ingenuity and concentrated effort over the past millennia has been the problem of how to get drunk. Even small-scale societies on the brink of starvation will set aside a good portion of their precious grain or fruit for alcohol production. In contemporary societies, people spend an alarming proportion of their household budgets on alcohol. This desire to get mentally altered has ancient roots, ones that can be traced to the very beginnings of civilization. In fact, archaeologists have suggested that various forms of alcohol were not merely a by-product of the invention of agriculture, but actually a motivation for it—that the first farmers were driven by a desire for beer, not bread

Why does alcohol play such a central role in most people’s lives? Although our taste for booze has typically been dismissed as an evolutionary accident, a closer look at history and the relevant science suggests that it actually helped catalyze the rise of civilization. By reducing our stress, improving our moods, enhancing our creativity, and facilitating our ability to bond with others—in short, through relaxing our muscles and our minds—alcohol allowed otherwise fiercely individualistic and selfish primates like us to live together and cooperate in a manner more reminiscent of bees than chimpanzees.

For most of our history, however, alcohol has come with two built-in safety features that have limited the danger it presents to both individuals and societies: natural limits to strength of fermented beverages and social constraints on consumption.

Alcohol (or, properly speaking, the compound ethanol) is a natural by-product produced by yeast as they munch their way through the sugars contained in starches or fruit. Yeast are naturally resistant to alcohol, but even the hardiest yeast cannot tolerate much more than 16% ABV (alcohol by volume). This is why naturally fermented alcoholic beverages top out at this level. In practice, and for most of history, the beers and wines we have had at our disposal have been much weaker than this, with most beers, for instance, hovering around 2-3% ABV. The alcohol-tolerance of yeast has historically set an upper bound on the potency of brew available to us.

This biological limit has traditionally been supplemented by a cultural trick. Ancient texts and art, from Egypt to China, depict drinking as communal and socially-regulated. The host of the Greek symposium, for instance, not only controlled the timing and ordering of the toasts, but also the ratio of water to wine being served, adjusting it as necessary. Similarly, if you’ve ever complained about how long it takes to get a pint at a crowded pub on a Friday evening, you would’ve hated ancient China. An early Chinese ritual text describes the beginning of the traditional wine drinking ritual as follows:

The host and the guest salute each other three times. When they reach the steps, they concede to each other three times. Then the host ascends. The guest also ascends. The host stands under the lintel, faces north and salutes twice. The guest ascends from the west of the steps, stands under the lintel, faces north and returns the salutation. The host sits down and takes the [wine] cup from the tray and descends to wash. The guest follows the host. The host sits down again and pronounces his words of courtesy, and the guest replies.

Even after this excruciating ballet of salutations and courtesies and ritual washing of the cups is done, the ancient Chinese tippler is still not free to consume at will: One does not drink unless a formal toast is made, and who has the right or responsibility to make a toast is also strictly dictated by ritual. Such archaic and stuffy rituals may seem light-years away from a breezy, Happy Hour gathering, but beneath the casual surface of modern social drinking are forces serving an identical moderating function.

Very recently, however, these two safety features have been disabled.

Let’s start with alcohol content. Clever primates annoyed with wimpy yeast maxing out at 16% ABV came up with a workaround: distillation. Conceptually, distillation is elegant and simple. Take a beer or wine—essentially, a mixture of water and ethanol—and heat it. Ethanol is more volatile than water, which means it will boil off first. If you can figure out some way to capture that alcoholic vapor and cool it back down into a liquid, voilà, you’ve got yourself some more or less pure booze. Break out the shot glasses.

In practice, distillation is both fiendishly difficult to pull off and rather dangerous—exploding home stills and scalding liquids were Prohibition-era America’s equivalent of contemporary meth lab disasters. This is why, although the basic principles of alcoholic distillation were laid out as far back as Aristotle, humans did not gain widespread access to distilled liquors until around the thirteenth century in China and the sixteenth to eighteenth centuries in Europe.

For a species whose ability to consume and process alcohol can be traced back at least 10 million years up the evolutionary tree, this is basically yesterday, and represents an evolutionarily novel danger. Distillation is what makes it possible for almost anyone, anywhere in the industrialized world, to walk into a corner store and emerge a few minutes later with a truly insane quantity of alcohol tucked into a small brown paper bag. A couple bottles of vodka contain a dose of ethanol equivalent to an entire cartload of pre-modern beer. The availability of such concentrated intoxicants is something our ancestors never had to deal with.

Add to this the danger of isolation. Even before our the COVD-19 crisis, contemporary drinking too often occurred in a social vacuum. This is especially the case in the suburbs, where people commute long distances from home to work and typically lack a social drinking venue within easy walking distance. Drinking has increasingly become something we do in the privacy of our homes, outside social control or observation. Knocking back a string of high-alcohol beers or vodka and tonics in front of the TV, even with one’s immediate family around, is a radical departure from traditional drinking practices centered on communal meals and ritually-paced toasting. It instead calls to mind the bottomless alcohol feeding tubes provided to overcrowded rats in alcohol and stress experiments.

Widely available distilled liquors and frequent solitary drinking are relatively recent developments that have fundamentally changed alcohol’s balance on the razor’s edge between usefulness and harm. A lifestyle where drive-through stores allow you to acquire cigarettes, firearms, Slim Jims, and enough alcohol to paralyze an elephant without having to leave the comfort of your SUV is one for which we may not be evolutionarily well-equipped, genetically or culturally

It is therefore not surprising that large-scale epidemics of alcohol abuse are invariably driven by one or both of these banes of modernity, distillation and isolation. Hard liquor becomes particularly harmful when the availability of spirits coincides with a breakdown of social order or ritual regulations. Both forces were at work, for instance, in the Russian vodka epidemic (1992-1994) that followed the breakup of the Soviet Union: life expectancy fell 3.3 years for women and an incredible 6.1 years for men, driven by a massive increase in vodka consumption. The restrictions on socializing caused by the COVID-19 pandemic may present us with a similar public health crisis. There is debate about whether or not overall alcohol consumption has increased, rather than simply shifting from bars and restaurants to the home, but either way our drinking has become more solitary, isolated, and unhealthy.

The ancient Greeks viewed Dionysus, the god of wine, with a combination of reverence and trepidation. He inspired artistic creation and bestowed joy on humanity, but could also turn people into animals. The modern innovations of distillation and isolation only increase the dangers lurking in the bottle.

For most of us, the best response to these risks is not complete abstention, but moderate and communal enjoyment of beer and wine. They key word here is communal. Though we no longer have strict rituals governing our indulgence, ethnographic and experimental studies have shown that people—mostly unconsciously—adapt their consumption to conform with the group. This can go seriously sideways in pathological cultures, like university fraternities, but in most societies, the effect is one of moderation. This is why, for most of history, the consumption of alcohol has been a fundamentally and essentially social act.

As pandemic lockdowns ease and we return to ordinary life rhythms, the revival of social drinking should be embraced with euphoric gusto. The shared experience of music, happy chatter, effortlessly synchronized conversation, rising endorphin levels, and reduced inhibitions catalyzed by a few glasses of ethanol has been impossible to replace with Zoom chats, and it is something we’ve been desperately missing. Let us look forward to once again celebrating the ancient, distinctly human joy of sharing a pint or two among friends.

Just maybe hold off on the Jägermeister shots. 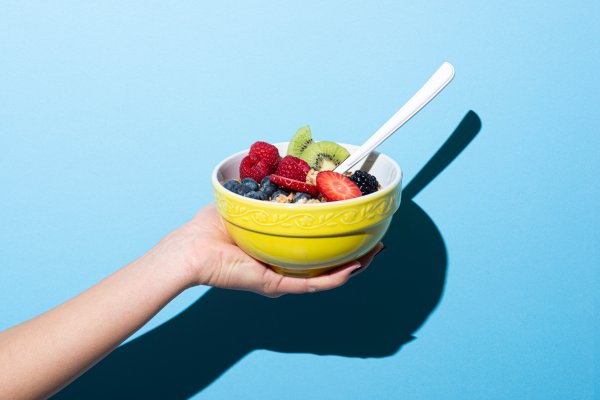 Why You Eat the Same Thing For Breakfast Every Day
Next Up: Editor's Pick