There’s no such thing as a slow month in the TV-release calendar anymore, but December does still often feel like an afterthought. The annual best-of lists are already out, sweeps month (to the extent that it still matters) is over before Thanksgiving and, traditionally, we’re all too busy shopping and holiday-partying and visiting family to spend too much time in front a screen. But December 2021 has brought more than just end-of-year dregs and Yuletide treacle to TV—and I’m not talking about that dire Sex and the City sequel.

Which is probably a good thing, as yet another COVID spike has thrown yet another wrench into many Omicron-fearing would-be revelers’ festivities. It’s cold comfort, I know, but the best I can offer is this list of worthy distractions. From a Harlem-set sitcom to a holiday romance by the creator who updated One Day at a Time, to a beautifully acted pair of UK imports and a pandemic drama that might well leave you feeling hopeful, here are five new shows to help you survive a second Christmas on the couch.

Sometimes a stunning performance is enough to reinvigorate an old story. The tumultuous reign of Henry VIII is one such tale, memorably retold on TV in the BBC adaptation of Hilary Mantel’s Wolf Hall as well as in Showtime’s frothy The Tudors. On screens big and small, such celebrated actors as Vanessa Redgrave, Claire Foy, Helena Bonham Carter, Natalie Portman and Natalie Dormer have portrayed the tragic figure of Anne Boleyn. Yet I’ve never seen an Anne quite as haunting as the one Queen & Slim star Jodie Turner-Smith embodies here.

A three-part series imported from Britain’s Channel 5, Anne Boleyn chronicles the queen’s downfall in the style of a psychological thriller. As a weak Henry (Mark Stanley from Game of Thrones) wavers and crafty Thomas Cromwell (Barry Ward) plots, Anne schemes to save herself and her young daughter in the aftermath of a miscarriage that turns the court against her. (In another welcome casting choice, Paapa Essiedu of I May Destroy You plays Anne’s brother George.) We all know how that campaign ended, and Eve Hedderwick Turner’s script doesn’t necessarily add much from a historical or thematic perspective. Yet Turner-Smith makes the miniseries so captivating it scarcely matters, in a layered, “identity-conscious” performance that contrasts the queen’s private panic with her initially shrewd but progressively unraveling public self-presentation. Regal in posture, resplendent in jewel-toned gowns and framed by painterly cinematography, this Anne is as unforgettable as she is unconventional.

Every once in a great while, peak redundancy works in our favor. Earlier this year, Starz unveiled a comedy about four very different, uniformly fashionable 30-something Black girlfriends in Harlem: Run the World. And now here’s Amazon, with its own comedy about four very different, uniformly fashionable 30-something Black girlfriends in Harlem (also the title of the show). These series are so similar that they both include a main character who teaches at Columbia. But you know what? They’re also both charming, funny, culturally specific depictions of female friendship that feel a whole hell of a lot less redundant in the grand scheme of things than And Just Like That. Plus, Harlem comes from Girls Trip writer Tracy Oliver, so you know it delivers raunchy, laugh-out-loud comic set pieces and characters that pop off the screen. My favorite, in the early episodes at least, is Shoniquia Shandai’s lovable wildcard Angie, a flailing singer who’s taking a second chance at a career years after getting dropped by her label.

This British true-crime drama stars Olivia Colman and David Thewlis as Susan and Christopher Edwards, a deeply bizarre couple who came very close to getting away with murder. In case that summary hasn’t already propelled you straight to the closest screen, here are a few more enticing details: The writing is superb. Unlike just about any cop character you’ll see on American TV, the detectives all have witty, bone-dry senses of humor that make scenes that have them puzzling out the case together absolutely riotous. In an inspired stylistic choice, Landscapers alternates between the stark, grimy real-life settings the Edwardses inhabit and the vividly colorful world conjured by their cinematic imaginations. (One of the first things we see Susan do is buy a vintage Gary Cooper poster she can’t afford.) The miniseries is only four episodes long; if you were feeling ambitious, you could polish it off in a night. And when you’re done, you can read all about the real Edwardses in this fascinating piece from my colleague Mahita Gajanan.

A pandemic show? During our second COVID-dampened holiday season? Am I kidding you? In fact, no! And I’m not even one of those people who went rushing to revisit Contagion in March 2020. Since then, I have found everything from The Walking Dead franchise to last year’s The Stand reboot pretty excruciating to watch. But Station Eleven is a different kind of pandemic show—one that is less concerned with how its characters survive the virus than with what’s worth living for when everyone and everything you’ve ever known, including civilization, is gone.

Adapted from Emily St. John Mandel’s 2014 novel, a National Book Award finalist, the miniseries begins with the onset of a swine flu variant that kills within hours of exposure, ultimately taking out 99.9% of the world’s population. But even as it toggles between characters’ pasts and the present, 20 years after the collapse of society, the heart of the story is a theatre troupe traversing the post-apocalyptic Midwest to perform Shakespeare for ad-hoc communities of survivors, while a scary self-appointed prophet amasses a cult of children born after the pandemic. Our hero Kirsten—played by a wonderfully understated Mackenzie Davis, leading a fantastic ensemble cast that also features Gael Garcia Bernal, Himesh Patel and Caitlin FitzGerald—is an actor struggling to move past both nostalgia and nihilism. Armed with Hamlet, a mysterious sci-fi comic called Station Eleven and the mantra “because survival is insufficient” (yes, it’s a Star Trek quote), her quest makes a soul-sustaining case for the necessity of art.

Gloria Calderón Kellett has a knack for blending timeless TV formats with characters that feel specific to the present. In her beloved reboot of One Day at a Time, Calderón Kellett recast Norman Lear’s 1970s sitcom about a divorced mom to showcase a Cuban-American Army veteran, her queer teenage daughter and a firecracker of an octogenarian matriarch played by the legendary Rita Moreno. With Love finds the creator working her warm, inclusive magic on the traditional holiday-season romantic comedy—and you’d better believe it’s not about a harried white career woman who returns to her rural hometown to build snowmen with her high-school sweetheart.

Centered around a Latinx family in Portland, OR, the miniseries is four love stories in one. On the heels of a painful breakup, 20-something Lily (an effervescent Emeraude Toubia) gets caught between an old friend who’s madly in love with her (Desmond Chiam) and the pugnacious dude (Rome Flynn) who makes her pulse race. Her brother Jorge (Mark Indelicato) is getting serious with boyfriend Henry (Vincent Rodriguez III), but there are obstacles ahead. The siblings’ parents, Beatriz (Constance Marie) and Jorge Sr. (Benito Martinez), have been drifting apart after decades of marriage. And their cousin Sol (Isis King), a trans oncologist, summons the courage to say yes when a colleague (Todd Grinnell) asks them out. This gentle, funny, culturally specific five-episode story spans a year’s worth of holidays, from a Nochebuena party to an emotional Día de los Muertos, all tied together by the love that binds a family.

The last month of the year tends to be pretty quiet on broadcast primetime, but a few networks have used the time to preview their midseason sitcoms. (Thankfully, the second half of the 2021-22 season will be heavier on primetime comedy than the first.) So far, the standout is this single-cam mockumentary, created by and starring A Black Lady Sketch Show alum Quinta Bruson, about teachers at an under-resourced Philadelphia public school. While the show won’t officially join the ABC lineup until January, the pilot is currently streaming on ABC.com and Hulu—and its mix of kindness, structural critique and characters shooting exasperated looks straight at the camera is sure to appeal to fans of Parks and Recreation and Superstore. 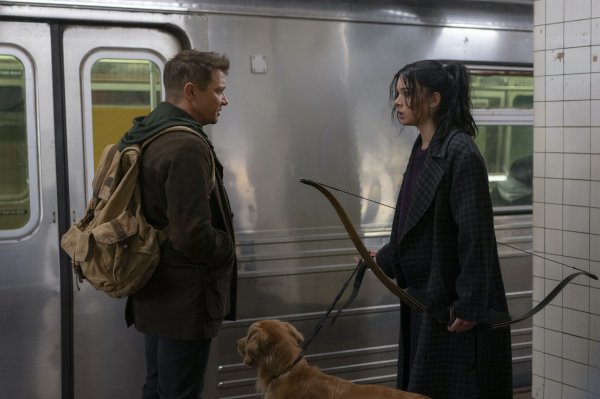 From Hawkeye to Spider-Man: Far From Home, the MCU Is Blurring the Line Between Hero and Villain
Next Up: Editor's Pick