Amid a Continuing Wave of Gun Violence, This U.S. City is Bucking the Trend

Homicides as a result of gun violence have remained consistently high across the U.S. in 2021, after a steep increase last year during the first waves of the COVID-19 pandemic.

Broadly, the year-on-year increase in 2021 is not as large as that in 2020 compared to 2019. But many major cities have in fact have seen even higher numbers: As of Dec. 29, there have been over 550 homicides in Philadelphia this year, which broke the 1990 record of 503; in Indianapolis, over 250 people have been killed, more fatalities than the highest previous toll 0f 215 (which was recorded in 2020). In Washington D.C. over 200 murders were recorded for the first time since 2003.

One city in particular, however, has experienced an opposite trend.

St. Louis, which in 2020 had its highest murder rate in 50 years, has recorded 190 homicides as of Dec. 29, which is 73 less than the 263 the year prior. And it’s not just that the numbers are lower compared to the tumultuous period of 2020, they’re lower than some pre-pandemic years as well. In 2019 the city saw 194 homicides and 205 in 2017. (The city’s population has remained statistically consistent over the years).

Shooting numbers, specifically, are also down by about 25% this year compared to last year.

“The decline we’ve seen this year in St. Louis is really large, and there really isn’t [one] definitive answer as to why,” Richard Rosenfeld, a criminologist at the University of Missouri—St. Louis and a member of the Council on Criminal Justice’s Violent Crime Working Group, which has been this year analyzing the sharp rise in homicides across the country, tells TIME, citing a lack of immediately-available data.

Read more: FBI Data Shows a Surge in Murders in 2020. That’s Not the Full Story

And to Rosenfeld’s point, city authorities, community leaders and local residents all feel like they’ve had an immense impact on the problem. Where they differ though is the extent to which their work has been collaborative versus separate—and, at times, even oppositional.

Dan Isom, St. Louis’ public safety director, says that part of the decline is a result of the city no longer dealing with challenges of lockdowns and restrictions that were in place last year due to COVID-19. The strain of the pandemic along with the restrictions is widely seen as having exacerbated gun violence in many cities.

Beyond that, however, he says the police department has taken a different approach to their work this year.

“We’re really focused on a holistic approach to addressing this issue of gun violence,” Isom tells TIME. “We’ve been trying to reduce low-level enforcement and focus on the high-level crimes.”

This “holistic approach,” according to Isom, includes supporting community-led initiatives that attempt to break the cycle of violence. And under new guidelines, when authorities come in contact with a victim of a violent crime, they try to have an advocate or a social worker reach out and help them with the trauma, fear, or anger they might be feeling.

People march during a rally in St. Louis on on Feb. 24, 2020, with city residents calling for more action on gun violence.
Christian Gooden—St. Louis Post-Dispatch/AP

Deployment strategies for the St. Louis Police Department have also changed from last year. Officers are now being sent to areas where they know violence will likely occur, based on “improved intelligence gathering,” Isom says. “We’ve tried to be focused on the people who are actually committing violence and not cast a wide net amongst and the entire community.”

And Isom says that the department is also continuing to work on developing its relationship with St. Louis residents directly impacted by gun violence. “I think we’re doing a lot of the right things, the most important piece is how can we wrap the community more into this process,” Isom says.

Community leaders and activists tell a slightly different story. From their perspective, the decrease in violence is primarily the result of a renewed focus at the grassroots level to address and combat the issue—and they believe that this change is the result of people being fed up with relying on law enforcement

“A major shift has taken place where [people across St. Louis] are saying we have to be more involved in what’s going on in our neighborhoods,” says James Clark, Vice President of the Division of Public Safety and Community Response for Urban League of St. Louis. “You have individuals that are becoming more active on their blocks.”

As Clark explains, people are making an effort to engage directly with those they know could be involved in violent situations, as well as are getting more involved with the local organizations figuring out how they can contribute.

“Churches [and other community organizations] are doing food distribution, hosting job fairs, serving as vaccine clinics. (These kinds of ground-led efforts are seen as steps that can curtail gun violence indirectly because they foster a stronger environment within socioeconomically damaged neighborhoods.) We are seeing a change in attitude,” Clark continues. “We need family accountability, we need neighborhood accountability. We cannot heap the responsibility of [addressing] violence solely on the police.”

Furthermore, there’s a notion amongst some community leaders that the police have actually taken a step back from some of their responsibilities this year. LaDon Merriweather, an activist with Serving Our Streets, a gun violence de-escalation program in the city, describes a “disconnect” between police and many St. Louis residents which he says has “grown even more” in 2021.

“I think the morale is low,” Clark adds. “They don’t have the visibility that they once had. I think that’s what’s causing the community to [step up].”

Director Isom is aware of that perspective but says that as far as he’s concerned, the end goal should be for there to be fewer officers visible on the streets—and argues that a reduction in both police presence and gun violence is the most ideal scenario.

Regardless of the dynamic, the numbers speak for themselves. And this is where a consensus is clear across all stakeholders: even with the unanswered questions, there is hope that the city can continue on this trajectory into the new year. As time goes on, more information and relevant causation—both statistical and anecdotal—will become available, and provide lessons for other cities that are struggling with homicides as a result of gun violence.

“Get the people who [experience this problem daily] involved with stopping what’s going on in the community,” says Reginald Slaughter, community coordinator for the Fathers & Families Support Center. “We need to keep the community involved in the solutions. That’s how we’re going to keep this going.” 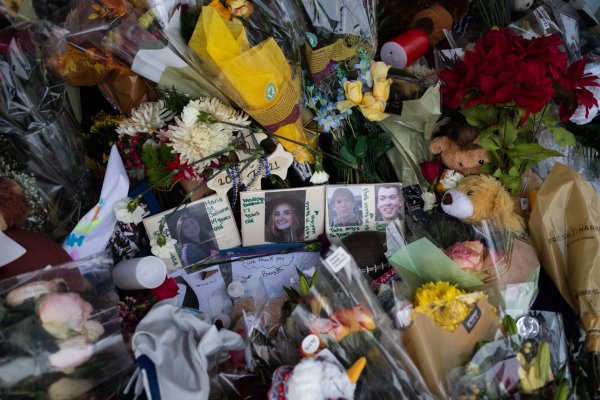 Parents of School Shooters Rarely Face Charges. This Case Is Different
Next Up: Editor's Pick