From Ghislaine Maxwell to Kim Potter, It's the Risk Every Defendant Weighs

By day 12 of Ghislaine Maxwell’s federal sex trafficking trial, jurors had heard from an ex-girlfriend of her longtime associate Jeffrey Epstein, from several of his former employees and from four women who allege Maxwell facilitated and sometimes participated in their sexual abuse. But as her defense team rested, it became clear one voice would remain absent: that of Maxwell herself.

The question of whether the British socialite would testify in her own defense had hung over her trial since its start. It’s a pivotal decision for any defense team, and in numerous criminal trials this fall a string of high-profile defendants have made the risky and unusual move to take the stand.

Kyle Rittenhouse was tearful but mostly composed when he testified on Nov. 10, telling jurors that he feared for his life when he fatally shot two people and wounded another during last year’s protests in Kenosha, Wisc. In Georgia on Nov. 17, Travis McMichael testified that he killed Ahmaud Arbery, an unarmed Black man, in self-defense. Shortly after, Theranos founder Elizabeth Holmes began her seven-day testimony at her fraud trial in California. Actor Jussie Smollett recently took the stand to defend himself against charges that he falsely reported being a hate-crime victim in Chicago. On Friday, the same day the defense rested in Maxwell’s case, former Brooklyn Center, Minn. police officer Kim Potter testified in her manslaughter trial over the shooting death of Daunte Wright.

The recent spate of testimonies follows years of notable silence in court from infamous defendants, including Harvey Weinstein, Bill Cosby and George Zimmerman. A tangle of factors may be behind why the latest high-profile defendants are now choosing to testify, experts say. But doing so may not be as rare or as helpful as people think.

What are the benefits of testifying in your own defense?

About 50% of defendants generally testify in their own criminal trials, according to Jeffrey Bellin, a William & Mary Law School professor and jury researcher. There are many reasons why, including the nature of the criminal charge. In self-defense murder cases, it’s crucial for jurors to hear from the defendant about how he or she perceived danger, because nobody else can provide as powerful an account.

“It’s much more challenging to put the jury in the defendant’s shoes without hearing from the defendant himself,” says Jessica A. Roth, a professor at Cardozo School of Law and a former federal prosecutor. The approach helped convince the jury in the Rittenhouse case: he was acquitted of all charges after testifying that he feared for his life when he opened fire.

Roth says defense attorneys likely evaluate how credible their client will appear in the eyes of the jury, taking into account their demeanor and appearance, as well as how well they will describe in public their version of events.

In this screen grab from video, former Brooklyn Center, Minn. police officer Kim Potter breaks down while describing for a jury the seconds in which Daunte Wright was shot dead during a traffic stop in April 2021. Potter, testifying Dec. 17 in her manslaughter trial in Minneapolis, says she accidentally grabbed her gun instead of her taser.
Court TV/AP/Pool

Young defendants like 18-year-old Rittenhouse, or those in the political sphere, might feel motivated to provide their side of the story to save their reputation beyond the trial, Bellin says. For example, even if Rittenhouse was confident of acquittal, he likely could have considered how the case might follow him for decades to come. Similarly, Bellin says it would make sense for those widely covered in the news to testify in order to change the narrative about their case. And for defendants who built their careers on being persuasive public speakers, like Elizabeth Holmes, those skills might help sway a jury.

In the COVID-era, testifying also might be the only time jurors see a defendant’s full face without a face mask. Removing a mask, Roth says, provides a window to better humanize a defendant and potentially build rapport with the jury through nonverbal cues.

It also helps ensure the jury clearly hears the testimony. In the Potter trial, the judge made a point of telling each witness to remove their mask upon taking the stand. Potter, who has said she mistakenly grabbed her gun instead of her Taser during a traffic stop involving Wright, remained stoic under questioning but broke down in sobs as she recalled the seconds leading to the fatal shooting. “I remember yelling ‘Taser, Taser Taser,’ and nothing happened and then he told me I shot him,” she wailed, burying her head in her hands.

One of the biggest reasons defendants don’t testify in their own defense, experts say, is if they have prior criminal convictions. If a defendant chooses to testify, the jury would likely learn about a conviction that otherwise would not have been admissible in court, according to Valerie P. Hans, a Cornell Law School professor who specializes in jury research. That, in turn, might be used by prosecutors to question their credibility. In one of the first studies Hans conducted on juries in 1976, she found that when people are hypothetically told that a defendant had a criminal record, they inferred that the defendant was more likely to be guilty of the current crime. “It’s really hazardous,” Hans says.

In a more recent study on felony juries, Hans found that 60% of felony defendants from 2000 to 2001 took the stand when they didn’t have a prior conviction. When defendants did have one, only 45% testified. And in about half of those cases, the jury learned about the criminal record. “That really deters people from testifying,” Hans says. “Lawyers know that if people hear about the existence of a criminal record, it’s going to bias and prejudice their clients.”

Such implicit bias leads many defendants of color to stay quiet, according to Martín Sabelli, a San Francisco-based criminal defense attorney and president of the National Association of Criminal Defense Lawyers. Sabelli says his clients, particularly those accused of gang-related charges, rarely take the stand because they believe jurors might make assumptions about them based on their race.

In this courtroom sketch, Ghislaine Maxwell, left, sits at the defense table with defense attorney Jeffrey Pagliuca while listening to testimony in her sex abuse trial on Dec. 16, 2021, in New York.
Elizabeth Williams—AP

Sabelli says another risk defendants face when testifying is that it often shifts the burden of proof onto them and away from the prosecution. In other words, a jury might subconsciously put more weight on whether the defendant proved their own innocence, rather than focusing on whether prosecutors proved their guilt. “My client has to take a huge leap of faith,” Sabelli says.

Defendants can also be asked about statements they made in the past if they are inconsistent from what they say during the trial. If a witness has previously given testimony under oath in a deposition, or made statements in the media like Elizabeth Holmes has, they can be asked about any inconsistencies. In the Travis McMichael trial, the prosecution highlighted inconsistencies between his testimony and the initial statements he made back in 2020 about the shooting. A jury eventually found McMichael, along with his father and a neighbor, guilty in Arbery’s death.

“You do sort of wonder in the Travis McMichael case, whether or not it was prudent for him to take the stand,” Hans says.

Ultimately, the fear of facing intense scrutiny and the possibility of coming off as a liar or unlikable plays a major role. “It can go terribly wrong,” Bellin says. “It’s such a big moment for the trial, and if it doesn’t go right, you can do a lot of damage.”

Travis McMichael speaks from the witness stand during his murder trial in the shooting death of Ahmaud Arbery, on Nov. 17, 2021, in Brunswick, Georgia.
Stephen B. Morton—AP/Pool

How does the defendant’s testimony, or lack of testimony, impact a jury’s thinking?

Either decision comes with a cost, researchers say. Defendants have a constitutional right not to testify, and juries are instructed that they may not draw any negative inference about a defendant’s guilt if they do not take the stand, Roth says. But a 2018 study by Bellin on mock juries found that jurors still penalize defendants for not taking the stand by inferring their silence as guilt. The study’s participants convicted 76% of the defendants who remained silent.

“A common intuition that jurors have is that if you’re innocent, you should want to say so,” Bellin says. His study also found that jurors convict more readily when they learn from cross-examinations that a defendant has a prior criminal record.

That’s why, Roth says, it’s frequently more effective as a defense strategy to remind the jury that the government alone bears the burden of proof and to attempt to poke holes in the prosecution’s evidence, without putting the defendant on the stand.

It seems Maxwell’s defense team took that approach. “Your Honor, the government has not proven its case beyond a reasonable doubt,” Maxwell told U.S. District Judge Alison J. Nathan. “So there is no reason for me to testify.”

Are you more likely to win a case if you testify in your own defense?

It’s unclear, experts say, adding that it’s nearly impossible to predict how a jury will decide in any case. It’s also hard to make any deductions from recent verdicts. While Rittenhouse was acquitted, McMichael, who similarly testified that he feared for his life when he faced Ahmaud Arbery, was found guilty of murder. Jussie Smollett was also convicted of lying about being a victim of a racist and homophobic attack.

The last few years are also not great indicators. Harvey Weinstein and Bill Cosby did not testify in their sexual assault trials but were both convicted. George Zimmerman did not testify, even though his case in 2013 centered around self-defense. Yet, a Florida jury still acquitted the neighborhood watch volunteer who fatally shot Trayvon Martin, an unarmed Black teenager.

Jurors ended up convicting Potter Dec. 23 on two counts of manslaughter, despite her emotional testimony, and on Dec. 29, a jury convicted Maxwell on sex-trafficking charges. Deliberations were ongoing in the Holmes trial.

Some defendants seek clarity in the world of jury consultants, who work with defense team to find the best ways to sway jurors. Famed consultant Jo-Ellan Dimitrius—who also consulted on O.J. Simpson’s murder trial—worked with Rittenhouse’s team, reportedly assembling three mock juries to determine whether it would help Rittenhouse to testify. “As a result of that it was very, very clear that his story needed to be told about what happened that night,” Dimitrius told CNN.

Because verdicts are so unpredictable, Bellin says when he was a prosecutor in Washington, D.C. in the early 2000s, he didn’t feel it was an advantage whether or not a defendant testified. But he preferred them to, if only to give jurors a full picture to help them sort out the truth for themselves. “It seemed like a much more satisfying trial to hear from the defendant because,” he says, “the defendant knows a lot more about what’s happening than everyone else.” 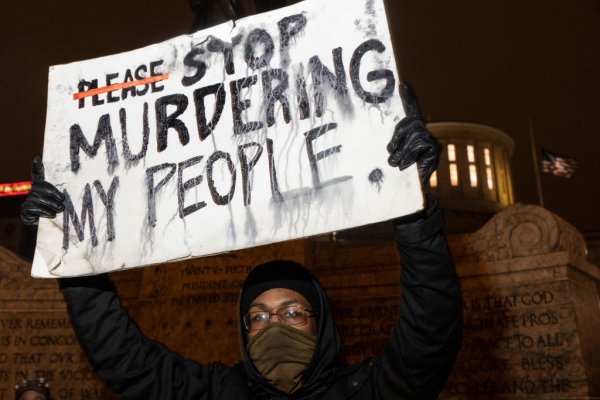