An aerial picture taken on July 27, 2021, shows smoke rising from a forest fire outside the village of Berdigestyakh, in the republic of Sakha, Siberia, which lies within the Arctic circle.
Dimitar Dilkoff—AFP/ Getty Images
By Eric Roston / Bloomberg

Few things signal something’s gone haywire on the planet quite like frozen land on fire. Now scientists have determined that Arctic fires, even milder ones, can reshape a landscape for decades, in ways that may make it even harder to keep global heating from eclipsing international goals.

It’s mostly rising temperatures that are thawing out frozen Arctic ground but northern blazes — already increasing — are now understood to play a disproportionate role, according to a study published last week in the journal One Earth.

Previous research has shown that higher temperatures, drier soil and more lightning storms will lead to more fires. That work, with the new paper, mean that “in the future we might expect to see an outsized influence on thaw from the fires that will likely increase,” said Róisín Commane, a Columbia University assistant professor who studies atmospheric composition and wasn’t involved in the new study.

The paper might help explain small increases in methane and CO₂ from Alaska’s North Slope seen over the past 40 years, she said, but there’s been no massive increase yet from abrupt permafrost melt — a longstanding concern among researchers.

When frozen ground melts, it can destabilize the earth above it so much that the ground subsides or collapses, leaving behind a landscape of what scientists call thermokarst. The terrain can take on the appearance of large, round, shallow pits, sometimes abutting so closely that scientists monitoring them have to step carefully along narrow strips between them.

Aerial images of these landscapes can be striking or beautiful as long as you don’t think about why they’ve grown by about 60% in the Alaskan Arctic between 1950 and 2015. Most of that is from air temperatures rising at twice the global average. By analyzing 70 years of satellite and overflight images, and applying a machine-learning model, scientists have determined that northwestern Alaskan fires have a lasting effect. They burned just 3.4% of the area but are responsible for 10.5% of thermokarst in Alaska’s Noatak National Preserve, the area under study.

Global warming is making fire conditions more common near the top of the world, and the study’s results are likely applicable to the uptick in fires elsewhere around the Arctic rim. In the period right after a fire, thermokarst rates are dozens of times higher than normal. After 40 years, the rate was still twice as high, returning to normal perhaps only after about eight decades.

“That’s the main take-home message about this project,” said Yaping Chen, lead author and a postdoctoral researcher at the College of William and Mary, who conducted the work as a University of Illinois PhD candidate. “Many people think that an ecosystem will always recover. There is actually a threshold point after which the ecosystem may never recover.”

When dead biomass freezes, hungry microbes can’t feast on it and release carbon dioxide in the process. But that’s what happens when the thaw comes. Or worse, thermokarst pits can flood, forming lakes that cut off oxygen to the ground. That makes the land swampy and attracts microbes that produce methane, a much more powerful greenhouse gas than CO₂.

Permafrost is chock full of carbon and it sits underneath 20% of the world’s land, holding twice as much as the atmosphere. Scientists don’t have maps as detailed as they’d like of where all the permafrost is. Remote sensing can only penetrate so far down the surface, so they have to make assumptions about how much permafrost there is based on the kind of land in an area.

Ultimately, they’d like to know when, how much and how fast permafrost will release more heat-trapping gases, according to a major UN climate-science assessment published in August. This would help them make estimates of the rate and extent of global warming more precise. How thermokarst transforms landscapes, releasing more CO₂ or methane in the process, isn’t captured well in climate models now.

“I like to think of it as a 10% effect,” said David Lawrence, a senior scientist at the National Center for Atmospheric Research who wasn’t involved in the study. Permafrost melt “is going to make climate change about 10% harder to combat. We have to reduce emissions by 10% more to get to the same targets, or we’re going to get 10% more warming. That number could rise to 20%, but I don’t think it’s going to be 50%.”

Eric Roston writes the Climate Report newsletter about the impact of global warming.

To contact the author of this story: Eric Roston in New York at eroston@bloomberg.net 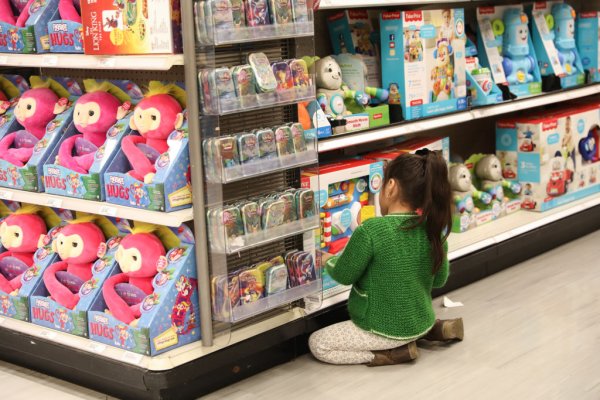 My Kids Want Plastic Toys. I Want to Go Green. Here's the Middle Ground
Next Up: Editor's Pick