Pistorius: 'I Did Not Fire at Reeva!'

Olympic and Paralympic track star Oscar Pistorius (L) arrives ahead of his trial for the murder of his girlfriend Reeva Steenkamp at the North Gauteng High Court in Pretoria, April 14, 2014.
Siphiwe Sibeko—Reuters
By Charlie Campbell

Oscar Pistorius once again broke down weeping during the fourth day of cross-examination in Pretoria on Monday. He stands trial for the murder of his girlfriend Reeva Steenkamp on Feb. 14 last year.

Chief prosecutor Gerrie Nel continued to grill the Olympian about details of the night when he shot Steenkamp through the bathroom door of his gated-community home. Pistorius maintains that he mistook the 29-year-old model for an intruder. “My defense is I heard the noise, I didn’t have time to think, I fired out of fear,” the athlete said just before he broke down on the stand. “I did not fire at Reeva!” The judge briefly adjourned the court for a second time on Monday to allow Pistorius to compose himself.

Pistorius’ story has come under intense scrutiny from Nel, who argues that the double-amputee athlete — known as “Blade Runner” due to his trademark prosthetic limbs — intended to harm Steenkamp after the couple had quarreled.

Nel focused on the position of duvet and jeans in the bedroom, and Pistorius’s assertion that Steenkamp was in bed when he got up to fetch a fan and heard a noise from the bathroom.

“If Reeva was in bed she would have heard that as well?” asked Nel, accusing the defendant of “tailoring evidence.”

“I say that it’s improbable that you would have not, having heard a window open … asked her if she heard it,” he added.

Pistorius replied that she may not have said anything as “she would have been as scared as I was.”

Also under examination was the position of a duvet and pair of the victim’s jeans in the couple’s bedroom, as were alleged inconsistencies between Pistorius’s bail statement and his witness testimony regarding the noise he heard.

“I’m saying, and it’s the state’s case, Mr Pistorius, that she wanted to leave and that you weren’t sleeping, you were both awake,” said Nel, asking why the jeans were not in her otherwise impeccably packed bag.

Nel then asked Pistorius if he recalls what he screamed at the intruder in the bathroom.

“If there’s somebody in your house in the middle of the night, I’m sure anybody would want to chase them out,” he added, breaking down to the point that Judge Thokozile Masipa ordered a recess. 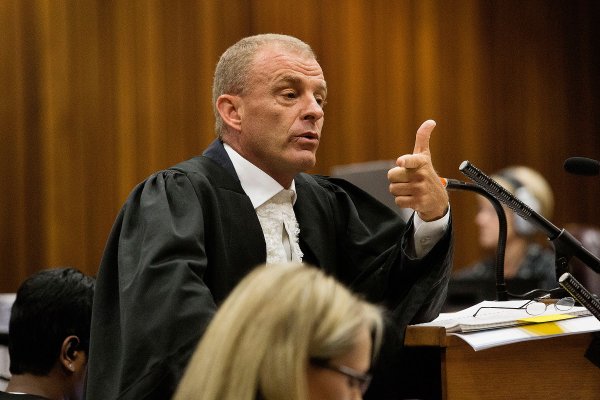 Prosecutor to Pistorius: You're Lying
Next Up: Editor's Pick