Representative Lauren Boebert, a Republican from Colorado, center, listens during a news conference outside the Capitol in Washington on Nov. 17, 2021.
Stefani Reynolds—Bloomberg/Getty Images
By Philip Elliott

Apparently, the way someone animates violence against a colleague matters more than the fact they’re doing it in the first place—at least, if you’re a Republican in the U.S. House of Representatives.

About two weeks ago, members of the House censured Rep. Paul Gosar, an Arizona Republican who tweeted an animated video that portrayed him killing Rep. Alexandria Ocasio-Cortez, a New York Democrat and progressive star. The video, to every Democrat’s mind and to GOP Trump critics Reps. Liz Cheney and Adam Kinzinger, crossed a line. Privately, Republicans on the Hill have long considered Gosar a fringe figure whose casual closeness with known white nationalists is embarrassing for the party. Nevertheless, ahead of the censure vote, most Republicans linked arms and defended Gosar, whom they argued with varying enthusiasm and sincerity that he had removed the post and apologized for something done by his staff without his knowledge.

It was only the seventh such censure in the last 100 years and just the second since 1983. And there doesn’t seem to be an eighth in the offing, despite a similar scandal involving Rep. Lauren Boebert that has unfolded this week. Bo ebert is a Colorado Republican and QAnon praiser who successfully primaried a five-term incumbent Rep. Scott Tipton, whom she considered insufficiently loyal to ex-President Donald Trump. As The New York Times sagely observed early in her time on the Hill, Boebert “represents an incoming faction of the party for whom breaking the rules—and gaining notoriety for doing it—is exactly the point.”

Well, Boebert has spent this week doubling down on her rhetoric that can only be described as anti-Muslim in describing her Democrat collegage, Rep. Ilhan Omar. Over the Thanksgiving recess, videos from September and Nov. 20 surfaced of Boebert telling audiences that she remarked to a Capitol Police officer that they were probably safe because Omar, who was standing nearby, didn’t have a backpack—a crude suggestion that the two-term lawmaker, who came to America in 1995 as a refugee from Somalia, may be a suicide bomber.

Lest you think the story is being twisted, let’s just include the full quote from last month in Colorado:

It turns out, it’s a very similar anecdote to one she told during the Staten Island Conservative Party’s dinner in September. She also told that audience that Omar and Rashida Tlaib, another Democrat House member who is also Muslim, are “black-hearted evil” who are part of the “Jihad squad.”

Naturally, the video sparked a rash of angry calls to Omar’s office and death threats to the Minnesota lawmaker. “We cannot pretend this hate speech from leading politicians doesn’t have real consequences,” Omar told reporters at the Capitol this week before playing one of the death threats from her iPhone. “You will not be living much longer,” the caller says in a message that used profanity and suggested she was a “traitor” who was due before a military tribunal.

Omar’s office has also maintained the incident described by Boebert—when a Capitol Police officer was running in fear—never even happened and has asked her colleagues to take action to hold Boebert responsible.

Omar has long been one of the right-wing’s favorite subjects for stereotyped criticism and flat-out smears. One of the first two Muslim women elected to Congress on the same night and the first to wear a hijab on the House floor, Omar a member of the progressive voting bloq in the House known conversationally as The Squad. Her friends like Alexandria Ocasio-Cortez occasionally draw the ire of fellow Democrats for some lively language that pushes the party further to the left than they’d like, but Democrats are quick to defend their own.

As Omar told TIME for a 2019 profile: “The right wing, Trump, the Republicans, white supremacists [launch] attacks on immigrants, refugees, Black people, women, Muslims.” In her, she said, “They have all of that in one box.”

There was the social media-fueled story that she married her brother. (Shockingly, a lot of those claims have been scrubbed online, according to her hometown paper’s investigation. Equally as shocking, Boebert repeated the claim on the floor of the House as she was defending Gosar from censure.) She is regularly inundated with death threats. Trump went so far as to lean into the anti-Muslim rhetoric to juxtapose Omar speaking in the wake of a shootings at mosques with video of the Twin Towers on Sept. 11, 2001. In response, Pelosi asked Capitol Police to add a detail to keep Omar safe. One New York man has pleaded guilty for threatening to “put a bullet” in Omar’s skull; a judge sentenced him to more than a year in prison.

Now, before you think Boebert will pay a price for engaging in such blatant Islamophobia, it’s important to do a gut check with Republicans’ views of Muslims. In 2002, 32% of Republicans agreed with the thesis that Islam encouraged violence. Twenty years later, according to Pew, that number hit 72% among the GOP.

Boebert and like-minded conservative performance artists on the Hill, including Reps. Marjorie Taylor Greene, Madison Cawthorn and Matt Gaetz, routinely confuse trolling with governing. “I have built my staff around comms rather than legislation,” Cawthorn wrote to colleagues in an email obtained by TIME.

Most of their antics are in service of promoting Trump and his return to power. Consider the dress Boebert recently wore to Mar a Lago with the right-wing slogan of “Let’s Go Brandon.” Or the video Boebert released in the wake of the Jan. 6 insurrection, demanding House Speaker Nancy Pelosi “tear down this wall” that went up as a security measure against a sequel to that day’s failed insurrection—ending it with a gunshot as the video faded to black. Or when Boebert reportedly threw a mask in the face of a Hill staffer who handed her one so she could comply with mask requirements. (Her staff says she pushed it back across the desk.) This list goes on, because for a certain corner of the GOP, the shredding of civility and comity is integral to what it means to be a loyal Republican.

So far, no one has actively chased a credible punishment for Boebert in light of her comments about Omar. She apologized “to anyone in the Muslim community I offended”—but not to Omar herself.

Minority Leader Kevin McCarthy just wants all of this to go away. He reached out to Majority Leader Steny Hoyer trying to broker some sort of truce to calm tensions, a move Hoyer warned McCarthy would end badly. Still, Boebert reached out to Omar, who hung up on her when Boebert wouldn’t express a more public contrition to her directly. Boebert seemed to withdraw her vague apology in a follow-up message: ​​”I will fearlessly continue to put America first, never sympathizing with terrorists. Unfortunately Ilhan can’t say the same thing and our country is worse off for it.” She then went on Fox News to say she wants to have a debate on the House floor with whether Omar is a terrorist. “I’m not a terrorist” is not a statement anyone wants to have to say on the House floor—nor should it be required.

Clearly, McCarthy isn’t getting his way. Over the weekend, Rep. Nancy Mace of South Carolina criticized Boebert on CNN, saying, “I have time after time condemned my colleagues on both sides of the aisle for racist tropes and remarks that I find disgusting and this is no different than any others.” Boebert’s ally Greene responded to Mace by leaning into Boebert’s langage: “just go hang with your real gal pals, the Jihad Squad.”

The very small group of Republicans willing to stand up to Trump did their best to plead with their colleagues to be better. McCarthy, for his part, told a closed-door party meeting that—and this is an actual quote—”I’m not here to be your babysitter” and said he didn’t want to get involved any more.

So why does it appear Boebert will get a pass, when Gosar didn’t? A couple of theories are going around the Hill. For Democrats, the actual depiction of violence in Gosar’s video was more than Democrats could stomach. But if they start doling out punishments to every lawmaker servicing Trump’s ego, there will be few Republicans left with actual responsibilities at the Capitol. And even those who want to see Boebert rendered powerless or chastened recognize they may actually be protecing Omar better by doing nothing; Omar’s criticism of Israel has been seen in some circles as anti-Semitic, and Republicans when they reclaim power could censure Omar for perceived anti-Semitism the way Democrats could punish Boebert now. Why give the GOP a playbook to police this space?

For Republicans, they’re keenly aware that action against one of Trump’s favorites is potentially career ending. Just consider this: the day after Gosar’s censure, Trump announced his endorsement of Gosar for another term—a finger in the eye of normalcy in D.C.

McCarthy just wants to trade his current title for one he has unsuccessfully chased before: Speaker. If he appears even the slightest bit at odds with the Trumpists, he can see that hope dashed should Republicans reclaim the majority next year. It’s why he backed the Trump-cheered booting of Rep. Liz Cheney from her Leadership post for telling the truth about Jan. 6, an event seemingly so unworthy of investigation that McCarthy’s blew up a commission to review it. The D.C. Brief has considered McCarthy’s calculation before, and it’s a cold one: If the majority is narrow, even a few defections from the likes of Boebert could make the difference.

Which is why, this week, McCarthy said he would not support a punishment of Boebert: “After she apologized personally and publicly? I’d vote against it.” McCarthy is perhaps cartoonishly hoping Boebert remembers the stance when it comes time to pick the next Republican Speaker. He might be wise to remember one of America’s enduring illustrated scenes: Lucy pulling away Charlie Brown’s football. Violence has many forms of animation. 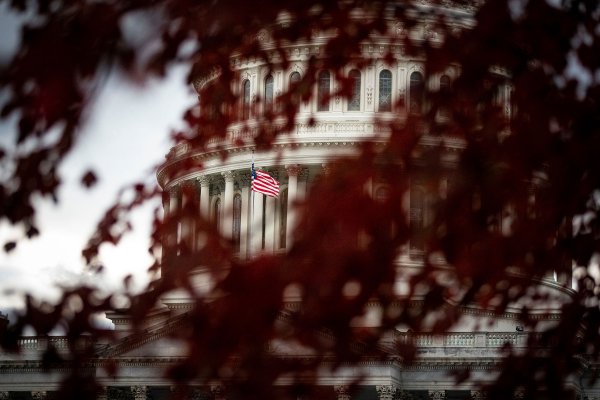 Facing a Billion-Dollar Shutdown, Congress Can’t Even Agree How to Procrastinate
Next Up: Editor's Pick