If you’re stuck on what to buy as Christmas gifts this year, a Swiss start-up has a suggestion: some carbon dioxide.

Climeworks AG owns the world’s largest direct-air carbon capture facility, in Iceland, where dozens of machines suck in air and filter out the CO2, so it can be stored permanently underground and prevented from contributing to global warming. For 85 euros (about $96), Climeworks will remove and store 85kg of CO2. You’ll be emailed a gift certificate to send to your loved one, helping them assuage their guilt over flying across the country, eating a lot of meat or other carbon-intensive activities they plan to engage in over the holidays. The company calls it “the world’s most sustainable gift.”

But while 85kg might sound like a reasonable amount of CO2, U.S. per capita greenhouse gas emissions are around 16 metric tons a year. That means you’d be removing only around 0.5% of the carbon your giftee put into the atmosphere this year. Removing all 16 metric tons would cost you $18,073. And if a lot of people wanted to do that, Climeworks would run out of gift cards pretty quickly: their plant can capture 4,000 metric tons of CO2 per year—or the annual emissions of 250 Americans.

So, does gifting a few kilos of CO2 really help the climate? In the long run, it arguably does. Experts say that carbon capture and storage (CCS) technology will form a small, but crucial, part of the climate fight. And the burgeoning CCS industry needs money to grow so it can reduce costs and make it possible to remove meaningful amounts of CO2. (Gift certificates bought now will help pay for Climeworks to build new plants—the actual CO2 removal you order will happen within five years, the company says.)

In any case, Climeworks’ sustainable Christmas gift idea is likely better than most, says Julio Friedmann, a carbon capture expert at Columbia University’s Center on Global Energy Policy. “A lot of people want to undo the damage they cause through their emissions and this is a valid, verified way of doing it,” he says. “Fundamentally, Climeworks will do what they say they’re doing.”

Trying to give a gift that helps rather than harms the climate is a greenwashing minefield: from unnecessary “eco-friendly” gadgets that your friends and family won’t use, whose production emits greenhouse gases, to less credible carbon offsetting schemes, which lack robust design and monitoring. It’s probably fair to say, as most climate experts I’ve consulted do, that the most sustainable thing to give at Christmas is nothing at all.

But depending on how your friends and family feel about Christmas, giving nothing might not be very sustainable for your personal relationships. So, for those feeling helpless or climate-anxious this holiday season, I’ve tried to find the middle ground. Here’s a guide to how you can target your gift giving to help reduce emissions.

Right off the bat, we’ve got to acknowledge that the vast majority of the changes we need to make go far beyond what you can spend this Christmas. Governments need to set policies and make huge investments to drive the expansion of clean energy, the electrification of cars and buildings, and much more. Big businesses need to take responsibility for their emissions and make the decisions to cut them as fast as possible.

So, give your most committed friends and family a donation in their name to an organization fighting for those systemic changes. You could support the climate fund at The Founders Pledge, which analyzes the work of NGOs and charities to identify the most cost-effective donations. Or you can choose a specific NGO—if you aren’t sure which, consult the guides produced by the non-profit initiative Giving Green. If you know your gift recipient well enough, you could also consider giving to a political campaign: there are a growing number of local politicians and candidates focusing on town or region-level climate action.

According to the Environmental Protection Agency, 29% of U.S. greenhouse gas emissions come from transport, the greatest share of any sector. There are nearly two cars per household in the country, the vast majority fossil-fueled, and each one emits on average around 4.6 metric tons of carbon a year.

If you can shift someone out of their car and on to zero or low-carbon transit, they’ll save roughly 404 grams of CO2 per mile travelled. You could buy them a used bike—cheap ones go for around $100. Or, pre-load $20 on a card for your local public transit system. The latter may be a little unsexy, but it has the added benefit of supporting a sector that is crucial for the climate and in dire financial straits thanks to falls in ridership during the pandemic. Maybe put a bow on the card.

For longer distances, an Amtrak gift card—available for any amount up to $500—will cushion rail’s often prohibitively expensive prices in the U.S., helping your recipient choose trains over flights for their next trip. According to Amtrak, on Northeast Corridor services, travelling on their services produces 83% less emissions than driving alone and up to 73% less than flying.

Give the Gift of More Efficient Electricity

The second biggest source of emissions in the U.S. is electricity, representing 25% of the total. The key to cutting them is a) making buildings and products more energy efficient and b) switching out energy sources from dirty coal and natural gas, to clean wind, solar and hydropower. The Biden administration aims to reach “100% carbon pollution-free electricity” in the U.S. by 2035.

Unless you have $20,000 to spend—the average cost of installing a set of solar panels in the U.S., according to energy marketplace EnergySage—you’re not going to be able to give anyone a renewable energy system. But you can help them reduce their electricity use, and their energy bills. Start with lighting, which makes up 10% of household electricity use: a set of energy efficient light bulbs, which consume up to 85% less energy than conventional bulbs, go for roughly $20. Or for a more exciting gift, try a smart light system, for around $200, which allows you to remotely control not only the brightness, which saves on wasted energy, but also the color of your lights, which is just fun.

Another option, if they’ll definitely use it, is a solar charger for their devices, around $60; or even a solar-powered generator, for $200—$600.

Or Give Them Heating That Won’t Heat the Planet

About 13% of U.S. emissions come from the non-electric needs of homes and businesses. Heating is the biggest culprit: combined, heating rooms and water makes up 62% of the energy used in an average home, per the U.S. Energy Information Administration.

Again, you probably don’t have thousands of dollars to help your giftee replace their natural gas-powered stove or heating system with an electric one, or insulate their home.

But a smart thermostat, available from under $100, for example, allows you to control your home’s heating and cooling remotely via an app, cutting down on waste. A low-flow shower head, for around $40, can cut water consumption per shower in half while maintaining the high-pressure feel of a normal shower. That reduces the amount of water that needs to be heated. Or, just get them a really comfortable sweater that they won’t want to take off, ideally from a thrift or consignment store.

Presents For Foodies That Could Reduce Greenhouse Gases

Gifting a vegan or vegetarian cookbook could help spark a change in your recipient’s kitchen. Since plant-based cuisine has become a major trend in the food world, there are dozens of good ones to choose from, for around $25. For those less likely to change what they do at home, try a voucher for a fancy plant-based restaurant, which are increasingly popping up in U.S. cities. Or, for a lower budget option, make them a plant-based version of a dish you know they like.

If You Want to Gift Clothing or Similar Products

A significant chunk of U.S. emissions—23%—come from industry: that is, gases released by the burning of fossil fuels and by chemical processes in the production of goods and raw materials that we consume. And that chunk doesn’t take into account the emissions generated by the many products U.S. residents buy from overseas. The best way to reduce those emissions is to reduce how much we buy.

Obviously, Christmas gift-giving flies in the face of that idea. Buying second-hand goods, though, from thrift stores or online, is a very easy way to put something under the tree without causing unnecessary carbon emissions. And, as my colleague Alana Semeuls reports, buying used gifts brings Christmas joys all of its own.

Another way to target consumption emissions is to give items that support the circular economy, a movement to cut waste out from global supply chains and re-use materials as much as possible. For example, Patagonia, the outdoor wear retailer, began selling “recrafted” items made from old clothes in 2019, for $40–$230. They also offer “gently used” items and provide information on how to repair Patagonia products. Sneaker brand Thousand Fell sells fully recyclable shoes for $100, plus a $20 recycling deposit that your friend or family will get back when they return the shoe to be recycled. Maybe they can spend that on a gift for you. 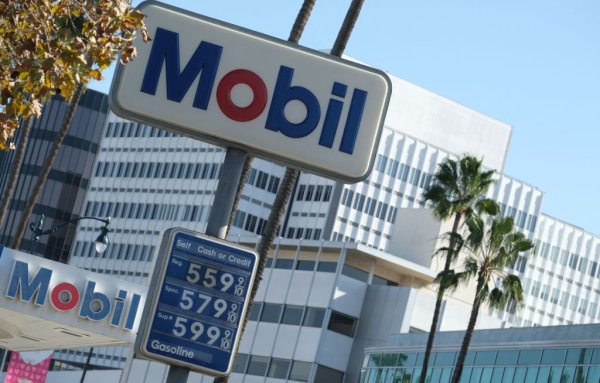 What Rising Oil Prices Can Teach Us About Climate Politics in the U.S.
Next Up: Editor's Pick