'Cows Are the New Coal.' How the Cattle Industry Is Ignoring the Bottom Line When It Comes to Methane Emissions

One of the early, attention-grabbing announcements at November’s COP climate conference in Glasgow was a commitment by more than 105 countries to join a U.S.- and E.U.-led coalition to cut 30% of methane emissions by 2030. The potent greenhouse gas, which is up to 80 times more effective at heating the planet than carbon dioxide in the short term, has often been considered the lowest hanging fruit when it comes to slowing down global warming. The COP pledges alone would slash warming projections by 0.2°C by the 2040s, according to the United Nations Global Methane Assessment.

But that low-hanging fruit is starting to rot. A new report produced by the FAIRR Initiative, an investor network worth about $45 trillion that is focused on the environmental, social and governance risks and opportunities of intensive livestock production, shows that the meat and dairy industries (including livestock suppliers to McDonalds, Walmart and Costco) is undermining COP26 pledges on methane reduction, by not tracking their own emissions and by failing to track those of their third-party suppliers.

Cows and other ruminants release methane as a byproduct of their digestive process. A single cow can release around 250-500 liters of methane a day. More methane is produced when the animals’ waste is collected in holding ponds, a typical practice for large scale industrial meat producers. The one billion cows used in the global meat and dairy industries, combined with other animals raised for livestock, are responsible for releasing the methane equivalent of some 3.1 gigatons of carbon dioxide into the atmosphere every year—accounting for some 44% of global anthropogenic methane. If the global livestock industry were its own country, it would be the world’s third-biggest greenhouse gas emitter, falling between U.S. and India when it comes to total greenhouse gas emissions.

Read More: The Cow That Could Feed the Planet

According to the Coller FAIRR Protein Producer Index, which assesses sustainability in the factory farming sector, the industry isn’t making much of an effort to do anything about it. This year’s report found that only 18% of global meat and dairy producers are tracking their methane emissions at all. And of the companies tracking their emissions, one in four actually saw an increase this year. “The ambitions set at COP26 handed a big slice of responsibility to the food and agriculture sector,” says Jeremy Coller, chair of the FAIRR investor network. “We cannot deliver the COP26 commitments without addressing the protein supply chain…yet failures from methane to manure management underline the growing sense in the market that cows are the new coal.”

The Index, now in its fourth year, assesses 60 global and publicly-listed animal protein producers—worth a combined $363 billion—against 10 environmental, social and governance-related factors including greenhouse gas emissions, deforestation, antibiotic usage and investment in alternative proteins. FAIRR releases the results publicly so that its investors, as well as others, can assess the sustainability and climate commitments of companies in their portfolios. It also provides an industry benchmark, and an incentive for improvement. “If we are to avoid the meat and dairy sector becoming a stranded asset, we must harness the leadership emerging in parts of the industry and transform the way our food, particularly protein, is produced,” says Coller.

Some of the companies assessed are ramping up investment into sustainable feed ingredients. Even though the world’s largest beef supplier, Brazil’s JBS, is not doing well when it comes to tracking emissions, it is taking steps to limit methane by partnering with the Netherlands-based feed additive company DSM to help cattle reduce their emissions through the use of a new food supplement. Of course, this still does not solve the problem of land-use changes like deforestation linked to feeding cattle, which also contributes to increased carbon emissions.

The meat and dairy industries’ slow embrace of methane tracking and reduction mechanisms is ironic, given they are likely to be two of the industrial sectors most rapidly and catastrophically impacted by climate change. According to the FAIRR report, at least seven of the 60 companies are already reporting climate-related financial impacts. The U.S. based Tyson Foods’ operating income decreased $410 million year-over-year in the first nine months of 2021, in large part due to severe weather disruptions. Brazilian company BRF, one of the biggest food conglomerates in the world, estimates that climatically-influenced changes in precipitation rates are already resulting in annual losses of up to $140 million as the cost of feed increases. That alone should be a red flag for investors.

“The science is clear that to avoid runaway climate change, high-emitting sectors such as agriculture must transform themselves in the next decade,” says Eugenie Mathieu, Senior Analyst at Aviva Investors, which is part of the FAIRR network. “Eighty-six percent of the world’s biggest meat and dairy suppliers are still failing to set meaningful reductions targets for emissions, which is enormously unhelpful given that extreme weather events are increasingly hurting the bottom lines of these companies. Investors can play their part by demanding that the animal protein producers they invest in step up to the plate and make change happen more quickly.” 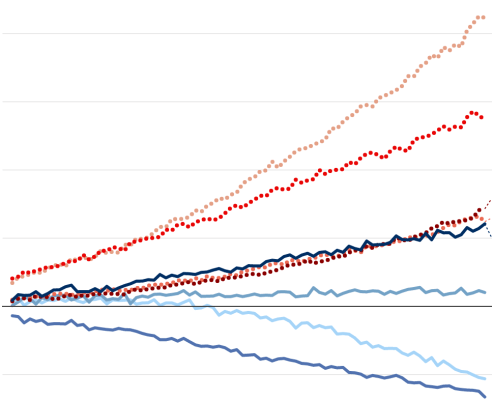 Arctic Rain Will Soon Be More Common Than Arctic Snowfall
Next Up: Editor's Pick