America's Foster Care System Is a Dangerous Place for Trans Teens. Now They're Fighting for Change

Benjerman Xander, pictured at his home in Portland, Ore. in November
Ricardo Nagaoka for TIME
By Roxanna Asgarian

Benjerman Xander entered foster care in Oregon as a 10-year-old in 2013. Ben had always felt wrong in his body, he tells TIME, but around the time he entered care, he began going through puberty, and the feelings got much more intense. “It just felt really off—like my body was doing something it shouldn’t have,” he says.

Ben had two different placements in the first month of care alone, beginning a vicious cycle: his traumatic childhood led to him acting out, he says, which in turn led to more moves. At that time, he identified as a lesbian, and wore boys’ clothes. Some of his foster parents were deeply uncomfortable with his identity.

As the number of Ben’s foster-care placements increased, so did his trauma. He experienced PTSD and had suicidal thoughts. But because he moved around so much—he had more than 20 placements in eight years—he wasn’t able to access consistent therapy.

At 13, he ended up in an all-girls residential treatment center, where he first learned the term “transgender” from another resident. It clicked for him. Still, the facility required Ben to use the girls’ restroom and referred to him with she/her pronouns. Later, Ben was moved to River Rock, a county-run facility in a converted wing of a juvenile detention center in Roseburg, Ore.

River Rock was, in essence, a jail: The doors to their rooms closed remotely and simultaneously, and the daily scheduled showers were cold.

Facilities like River Rock are difficult for all children, but the experience was particularly harrowing for Ben. He was teased mercilessly, with other residents insulting him with slurs aimed at his sexuality and identity. By the time he came to River Rock, Ben had been taking testosterone treatments for two years, but his treatments abruptly stopped when he moved into the facility. He was also taken off his antidepressant during this time. Ben became extremely anxious that he would go through female puberty, and suffered a mental health crisis. “I was very suicidal, I was very upset with everyone. I felt like I was alone in the world—I had no one to go to, no one to talk to,” he says.

Aric Fromdahl, the director of Douglas County’s Juvenile Department, which runs River Rock, could not be reached for comment. An Oregon Department of Human Services spokesperson said the department “disputes many of [Ben’s] allegations,” but refused to comment on children in its care.

Read more: Teachers and Trans Students Are Clashing Over Whose Rights Come First

In 2019, Ben became a lead plaintiff in a class-action suit filed against Oregon alleging that the state was violating the rights of children in its care. Class-action lawsuits against state and county child-welfare systems have been a common means of addressing harms to foster children since the 1970s, when an attorney with the New York Civil Liberties Union, Marcia Lowry, pioneered this type of case against the New York City foster care system. Lowry and her organization A Better Childhood have continued to file similar cases in the decades since; she and her team are co-counsel on the Oregon lawsuit, called Wyatt B. vs. Governor Brown.

But Ben leads a subclass of plaintiffs who are pioneers of a different kind: foster youth who are “gender and sexual minorities.” This marks the first time a lawsuit of this kind is specifically addressing the particular issues LGBTQ foster children face in care. (In the 1990s during a class-action settlement with New York City to make improvements to its child welfare system, a subclass of gay foster youth attempted to break off, arguing that their safety concerns weren’t adequately represented in the larger suit—but a judge ruled against their petition.)

“The Wyatt B. lawsuit is the first child welfare lawsuit in the country to litigate on behalf of system-involved LGBTQ+ youth, combined with other vulnerable populations as part of a single class action lawsuit, seeking comprehensive, not piecemeal, reform,” says Dawn Post, deputy director of A Better Childhood.

This year has been particularly challenging for trans people in America. More than 130 bills targeting trans rights have been introduced in states across the country, and 13 have passed, making this the worst year on record for the enactment of anti-trans laws, according to the Human Rights Campaign.

Trans youth and their affirming parents have particularly come under attack. Medical professionals are in agreement that gender-affirming care for children—which can range from supporting a “social transition” where a child’s choice of name, clothing and pronouns are respected, to medical interventions such as puberty blockers or hormone therapy—is evidence-based and can be lifesaving. But conservatives have become increasingly galvanized politically by the issue of allowing children to transition, arguing—contrary to mainstream medical opinion—that they should be kept from making that decision until they are adults. This year, at least 35 states debated whether to limit gender-affirming care for children, with Texas legislators going so far as to introduce legislation that would label puberty blockers or hormone treatment for minors as child abuse.

Read more: The Most Powerful Court in the U.S. Is About to Decide the Fate of the Most Vulnerable Children

While all foster youth are at increased risk of harm compared to American children overall, and are more likely to experience incarceration and homelessness both while in care and as adults, the situation is more dire for LGBTQ youth, and especially for trans youth. LGBTQ children are far overrepresented in foster care—one multi-year study found that 30% of foster youth identified as LGBTQ, versus 11% of the general population. (Five percent of foster youth identify as transgender, compared with one percent in the general population.)

Paul Southwick, another one of the plaintiffs’ attorneys, said that experiences like Ben’s, particularly in institutional settings, are all too common. “Trans youth tend more frequently to end up in these kinds of facilities… they’re rejected by foster families, [so] they become more difficult to place,” Southwick says. “They are being punished for their identity, when they haven’t done anything.”

Oregon filed a motion to dismiss the Wyatt B lawsuit, but in September, the judge ruled that the lawsuit can go forward. Next, attorneys for foster youth will argue that the sexual and gender minorities (SGM) subclass should be certified by the judge. If the judge certifies the SGM subclass, it will be the first of its kind in a major lawsuit against a state foster system, and attorneys hope it will start a national shift toward ensuring legal protections for this vulnerable subset of foster children.

Read more: Elliot Page Is Ready for This Moment

Part of what the plaintiffs want out of the lawsuit, Southwick says, is to require that Oregon gather data about the number of SGM youth the state has in its care. (Once identified, LGBTQ children could hopefully be placed in homes where their identity is affirmed, Southwick explains.) This is not currently the case. As a result, Oregon has estimated that just two percent of its foster population is LGBTQ, a figure researchers say is a drastic undercount. A 2014 survey of teens in foster care in Los Angeles county, meanwhile, found that 19% of respondents identified as LGBTQ.

“Having incomplete or nonexistent data is [part of] what allows a lot of abuses to go forward. When you don’t count people, then you essentially erase them, and when they’re erased, you’re not addressing their needs and their problems,” Southwick says. “So if we’re thinking about reforming a system, let’s think about the kids who are experiencing the worst of the worst. Let’s look at them and let’s take care of the problem.”

Oregon isn’t alone in struggling to adequately address the needs of LGBTQ foster youth like Ben. Nationally, data on LGBTQ youth in care is limited. A 2017 Lambda Legal report found that only four states have policies that trans youth should be placed in out-of-home care in accordance with their gender identities; 24 states have no specific policies stating that trans youth should be allowed to dress in accordance with their identities.

Eli—who TIME is identifying with a pseudonym because of privacy concerns—also went through the Oregon foster system. He’s trans, and although he was out in his performing arts high school, he wasn’t able to be himself in several of his foster homes. “I was living full-time as male at school, but I would have to go up to my teachers and say, ‘If you ever interact with my foster mom, call me this name and use these pronouns,’” Eli tells TIME.

Like so many other trans foster youth, Eli has experienced housing instability due to hostile placements. He’s now in a safe environment; he used his independent-living payments through extended foster care to move with his partner to New York City, where they share an apartment and he attends Queens College—but studies have shown that between 20 and 45% of youth experiencing homelessness identify as LGBTQ, and that LGBTQ homeless youth are more than seven times more likely to experience sexual violence than their straight peers.

They are also more likely to be incarcerated, says Dominique Morgan, executive director of Black and Pink, a prison abolitionist organization focused on LGBTQ incarcerated people. Morgan, a Black trans woman, experienced the child welfare, juvenile justice and adult incarceration systems in Nebraska. “When I look at how these systems overlap, I don’t even think they overlap,” she said. “I think they’re one and the same.”

Ben turned 18 this year, but he’ll be in foster care until he turns 21. His caseworker recently offered him a placement in an all-girls facility, but Ben said he’d rather find his own place than to be in a non-affirming placement—he’s currently living in a tiny-home community for low-income and houseless people in Portland. Ben’s still struggling to get on his feet, like many youth who age out of care, but his recent top surgery has greatly improved his mental health, he says, and he’s ready to start thinking about the rest of his life.

Ben said he’s participating in the lawsuit against Oregon, which seeks system improvements and not monetary damages, because he wants things to be better for trans kids who come into the system after him. “I want them to not have to go through as much as I had to,” Ben says. “I just want them to have support and kindness.” 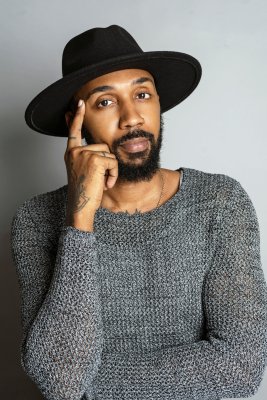 This Black Queer Author Is Fighting Against Book Bans
Next Up: Editor's Pick