Across the U.S., some employees are claiming religious exemptions to avoid getting vaccinated.
Getty Images
By Sanya Mansoor

As businesses across the country start imposing strict COVID-19 vaccine and testing requirements, some employees are claiming religious exemptions to avoid getting vaccinated—putting human resources departments on the frontlines of a fraught political issue that has already proven fertile ground for lawsuits.

The task before HR leaders is tricky: they have to figure out whether employees are applying for an exemption based on authentic religious beliefs or whether it’s a cover for their political views. “There are people who are going to have a sincerely held religious belief, but there’s a lot of folks out there who just object to the vaccine, and this will be their avenue to not get it,” says Ed Enoch, an attorney in Augusta, Ga., who has been fielding calls from clients at small and mid-size local businesses about everything from handling religious exemptions to vaccine mandates.

Every request for a religious exemption from the COVID-19 vaccine has to be considered individually. The requester can be part of a minority sect or small religious community, but you can’t just make a religion up. More importantly, what employers assess is not so much whether perceived leaders of an organized religion endorse vaccines but whether an individual’s religious belief is authentic and informs other aspects of their life beyond getting out of a COVID-19 vaccination.

“You can’t just say in a blanket manner that the Pope says it’s okay to get vaccines so we’re not giving religious exemptions to Catholics,” Enoch says. “It doesn’t have to be part of the doctrine of the faith that you attend, so it’s a really squishy standard; it’s really hard to put a finger on that.”

Federal employees are already subject to a COVID-19 vaccine mandate, and 92% have received at least one dose, the White House said on Nov. 24. There is currently no such rule in effect for private employers in the U.S., despite the Biden Administration’s repeated attempts to establish one. An Occupational Safety and Health Administration (OSHA) rule issued on Nov. 4 that would require businesses with 100 or more employees to ensure their workforce is fully vaccinated or tests negative for COVID-19 at least weekly has been stayed. Last week, the Biden Administration asked a federal court to intervene and lift the stay. In the meantime, the White House is urging businesses to proceed with adopting the rules. While the fate of the OSHA rule plays out in the courts, many businesses have already imposed or are considering imposing strict vaccine and testing rules.

Many large companies and government entities around the U.S. that have instituted vaccine mandates have been successful in getting employees inoculated. For example, New York City Schools’ vaccine mandate resulted in 96% of teachers getting a shot, the city’s mayor said in October. And United Airlines, which was the first U.S. airline to adopt a vaccine mandate, announced in late September that following the requirement, 99.5% of employees were vaccinated. These new requirements have sparked some lawsuits, too. On Monday, a federal judge blocked the Biden Administration from imposing a vaccine mandate for health care workers in 10 states. A circuit court ruled the same day that 15 New York City public school teachers and administrators must have their COVID-19 religious exemption requests reconsidered because of a potential violation to their First Amendment rights.

Enoch, for his part, has been encouraging many of his clients—including businesses that either have no HR department or rely on one or two people—to avoid imposing a vaccine mandate. That’s not because he thinks employees shouldn’t be vaccinated. Rather, he believes incentives, such as bonuses, are a more productive way to get a majority of workers inoculated. He also worries that employers don’t “have the time, resources or knowledge to properly vet (religious exemption) claims” and will likely end up saying: “Well, I’ll just grant it to anyone that asked for it.”

“Once you do that, then you really don’t have a mandate. All you’ve done is created a bunch of paperwork for yourself that you could have avoided by not having the mandate,” Enoch says.

On social media, thousands of people are sharing tips with each other on how to successfully secure religious exemptions. Nico Rocco, who was the admin of a Facebook group called “Writing Religious Exemptions for Vaccine Mandates Private Public Employers,” which has 5,300 members and is dedicated to navigating religious exemptions in the workplace, runs a website called Essential Liberties that offers workshops on “How to Answer the Hardest Questions on Religious Exemption Forms” for $25. The questions include describing the conflict between one’s religious belief and a COVID-19 vaccine requirement, as well as probing whether an employee also avoids using medication such as Tylenol and Pepto-Bismol, which were researched and developed in a similar manner to the COVID-19 vaccines (which relied partly on fetal cell lines). He offers to provide “real examples … to use from letters that have gotten accepted” and a free comprehensive guide to answering questions from employers. Rocco, who collects donations from those who feel the information has benefitted them, did not respond to a request for comment from TIME. After TIME sent a Facebook message to the group’s admins requesting an interview, the group was set to private.

Sharing advice on how to tailor responses to employer questions about religious exemptions could be a way to game the religious exemptions system, some experts say. Relying on templates instead of one’s own articulation of their specific beliefs undercuts the question of sincerity, which employers are trying to gauge. “It’s legitimate for an employer to say, ‘Well, are these your words?’” says Katherine Franke, a law professor at Columbia University and faculty director of the Law, Rights and Religion Project. “If it looks like the person is just parroting something that they copied off the internet, the employer can say no; we won’t give you an exemption.”

But in reality, it’s unclear how much time labor companies’ HR departments will be able to dedicate to scrutinizing these claims. “Many small businesses”—a majority of the businesses in the U.S.—”have an HR department of one,” says Emily M. Dickens, chief of staff and head of government affairs at the Society for Human Resource Management (SHRM). Vetting each exemption claim can be time consuming. “There will be employers who just don’t want to get in the business of evaluating religious exemptions, and so they will just do a box check,” Franke says. Employees have long been able to request religious exemptions to policies such as dress codes or being required to work on certain days, but these can be approved more easily because they don’t affect other employees. “[If companies] have outbreaks of COVID in their workforce because they’ve been overly generous in granting exemptions,” says Franke, employers could face litigation and complaints from other employees who get sick because they were exposed at work.

A Nov. 4 survey from SHRM found that 64% of employers are concerned about how to handle requests for religious or medical exemptions to a potential vaccine mandate. Many HR professionals are already overwhelmed as it is, with budget cuts and a significant labor shortage. Now they’re faced with questioning the sincerity of employee’s religious beliefs, and potentially getting sued no matter how they decide. “We have companies that weren’t prepared for this,” Dickens says. “This wasn’t in the job description.” 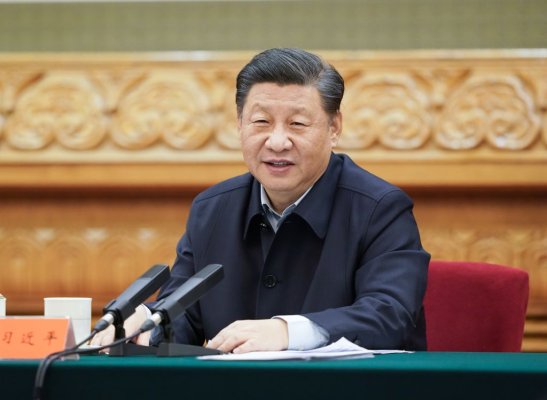 Xi Pledges Billion Vaccines for Africa in Wake of Omicron
Next Up: Editor's Pick