How Your Post-Thanksgiving Diet Could Help Save the Planet

As you tuck into your Thanksgiving dinner, the kick-off event (at least for Americans) of the holiday season, spare a thought for the planet’s carbon waistline.

Food production is a major source of greenhouse gas emissions, accounting for more than a third of emissions worldwide — and a new study has given fresh insight into how small changes in the diet can have a big impact on food-related emissions. And even if it doesn’t inspire you to forgo the turkey and trimmings, it serves as a good reminder that a post-holiday pause on overindulgence might be just the kind of thanks Mother Earth might appreciate most, not to mention your own body’s health.

Research published in the scientific journal PLOS One found that diets limiting meat, dairy and processed food were not only good for health, but for the planet as well. Previous studies only looked at broad food groups, but this one assessed the greenhouse gas emissions of 3,233 different foods consumed by a cohort of 212 adult volunteers in the U.K. over three 24-hour periods.

The report found that people whose intake of saturated fats, carbohydrates, and sodium met levels recommended by the World Health Organization had lower greenhouse gas emissions than people who exceeded recommended levels of those nutrients.

Read more: Counting Your Carbon Footprint One Meal at a Time

But before you skip the turkey in favor of pie, the report’s authors note that desserts don’t get a free pass either. “It’s not that confectionery is any worse than other dietary components, it’s that we eat so much of it that it all adds up to a high impact,” says the report’s lead author Darren Greenwood at the University of Leeds’ School of Medicine in the U.K. “Whilst other foods, like vegetables, contribute to a healthy balanced diet, sweets have very little nutritional benefit. So it is an unnecessary impact on the environment.”

The report’s findings support a focus on plant-based foods, both for personal decisions on diet and nutrition, and for public policy. But that doesn’t mean a plate of Brussels sprouts for Christmas dinner. It’s about being more thoughtful in your food choices, and conscious of how they are consumed, says Greenwood. “We can all do our bit by buying local produce, grown in season. Maybe this year buy less, but better quality, food. Don’t cook more than you’ll eat and try not to waste any leftovers. That way we can enjoy the holiday and treat ourselves—think of it as a gift to our children for the future.”

They will thank you for it. Eventually. 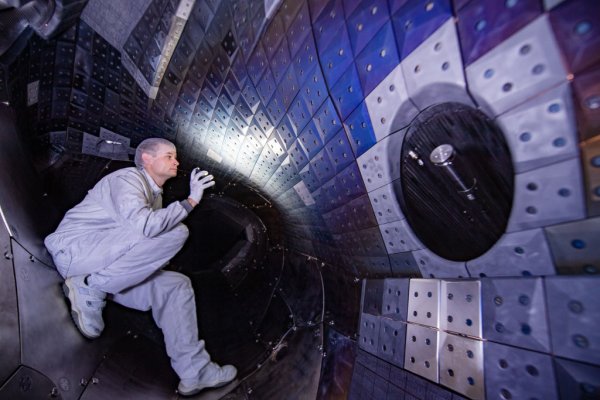 Fusion Finally Finds Its Place in the Sun
Next Up: Editor's Pick