India's Farmers Have Forced Modi to Retreat But He Will Be Back, With More Religious Polarization

India’s Hindu nationalist prime minister isn’t given to apologizing. For years, hoping for some sign of remorse, the media kept asking Narendra Modi if he ever regretted the 2002 pogrom against Muslims in the western state of Gujarat, when he was its top elected official. The closest they ever got was when he said—more than a decade later—that it was natural for anybody to feel bad if a “puppy comes under the wheels” of a car.

So, when Modi made an apology of sorts on Nov. 19, promising to repeal agrarian laws that had triggered an unprecedented, year-long farmers’ protest, it was met with joy, surprise and skepticism in equal measure. While the opposition can’t stop exulting at Modi’s about face, it is also warning that it could be a ploy to revive the laws later. Pointedly, Modi said sorry for failing to persuade the farmers of the necessity of the laws, not for the measures themselves.

The farmers, whose protests attracted global attention, have been celebrating the climbdown. But they are not calling off the protests until the formal repeal of the three contentious farm laws—which were, in essence, a bid to replace the government-controlled agrarian sector with the free market—and the introduction of guaranteed minimum prices for crops. That they won’t take the prime minister at his word is a function of the level of animosity between the two sides.

Modi’s government has, for months, been trying to defame the protesters as terrorists and stooges of China and Pakistan, turned Delhi into a fortress to prevent them from entering the capital, and tried using force to break up the agitation. More than 700 farmers died picketing Delhi’s outskirts in the course of the year, which the protesters squarely blame on Modi’s railroading of the laws through Parliament without due process, and his stubbornness in sticking with them.

For a man whose followers believe he is a redeemer who knows how to make India right, it isn’t easy admitting that he got something this important this wrong. But hubris is the least of his problems right now. Modi faces a difficult political test in about three months, when several states go to polls, and his mea culpa is a desperate strategic retreat to win a bigger war for his Bharatiya Janata Party (BJP). It exposes his weakness, to be sure, but the potential benefits of his climbdown may far outweigh the momentary humiliation.

The BJP’s power base threatened

Among the states heading into elections is the BJP’s power base of Uttar Pradesh, more commonly known as UP. With more than 200 million people, a population the size of Brazil, UP is one of the most backward of India’s 28 states—but it sends the highest number of directly elected parliamentarians to Parliament’s lower house, making it the most politically significant.

The farmers’ protests that have rocked the agrarian belt—stretching across western UP and the contiguous states of Punjab and Haryana—now threaten this bastion. UP has voted overwhelmingly for the BJP in the past, but now looks perilously close to slipping out of its control as farmer discontent mounts. It didn’t help that the son of one of Modi’s ministers is facing allegations in the state of mowing down four protesting farmers with his car.

A poor showing in UP will shatter Modi’s image of invincibility and reenergize the opposition before the national election in 2024. Hindu-Muslim farmer solidarity also seriously threatens the politics of polarization that are the cornerstone of the BJP’s rise to power.

Since the 1980s, UP has been the site of a Hindu nationalist campaign against a mosque supposedly built on the site of an ancient Hindu temple. The 16th-century Babri Masjid was eventually razed to the ground in 1992, during protests that helped turn the BJP from a fringe party into a national political force. The BJP’s sustained campaign of hate in subsequent years deepened the religious divide in UP, helping it to strengthen its base.

Read More: How Long Will Biden Pretend That Modi’s India Is a Democratic Ally?

Months before the 2014 national election that saw Modi ride to power, religious riots fanned by the BJP convulsed western UP, causing dozens of deaths, rapes and mass migrations by Muslims. As the traditional unity of Hindu and Muslim farmers snapped, the BJP, which had negligible presence in the region at the time, swept away a local farmers’ party and won all the seats there.

The last state election, in 2017, was similarly won by polarizing the electorate through dubious claims that Hindu families were being forced to flee Muslim-dominated areas in western UP. That year, the party fought the election on the promise of building a Hindu temple at the site of the razed mosque. Modi kept the promise, laying the foundation for the temple last year.

The farmers’ protest presents an existential threat to the Hindu identity politics that the BJP has used so well. Although touted as reforms, the disputed laws were seen by protesters as Modi’s sacrifice of the interests of ordinary farmers for the benefit his capitalist cronies. In recent months, the same areas of western UP that once exploded in religious riots—where the electorate was considered to have cleaved for good along sectarian lines—saw Hindu and Muslim farmers come together in large village meetings, and even chant each other’s religious slogans.

Modi was left with no choice but to cut his losses to arrest the trend and live to fight another day. He needs them to hate each other, not him. He needs them to focus on their religious differences, not class similarities.

Modi’s dream of a Hindu state

For Modi, UP is not just central to political survival but also to his larger project of remaking India’s secular republic as a Hindu state. UP and its current leader are key to this enterprise.

UP is run by a Hindu monk-turned-politician whose own vigilante group, open bigotry and incitements against Muslims make Modi look like a liberal. Known by his monastic name of Yogi Adityanath, the rising star of the Hindu nationalist firmament is increasingly seen as the worthy successor to Modi who will take the Hindutva project to new heights.

He is neither shy of vocalizing hate nor hesitant in applying force to show Muslims their place in the emerging order. Hate speech and crime against Muslims have been normalized in the state under him. Cities, neighborhoods and landmarks with Muslim-sounding names are being furiously renamed. He has introduced a spate of new laws against cow slaughter, religious conversions and interfaith relations that allow police and vigilante groups to act with impunity. Political dissent and media criticism are suppressed ruthlessly.

His popularity with the party’s base and rapid rise in the hierarchy are seen as signs of an experiment with an even more audacious, majoritarian transformation of Indian politics. Inspired by his “success,” chief ministers in other BJP-ruled states have been trying to emulate his unabashed authoritarian-sectarian model of governance. Losing UP would be to lose this momentum.

The farmers understand Modi’s UP pressure point. On Monday, just days after Modi’s announcement, they convened yet another massive rally in the state capital Lucknow, pressing their new demands, which also include compensation for the deaths and withdrawal of cases against protesters. Modi needs to pacify them. If he can do that, he can go back to the business of what he is really good at—seizing the narrative and winning elections.

It won’t be easy this time, though. Memories are still fresh of the death and distress unleashed by COVID-19, which saw the collapse of UP’s pathetic public healthcare system. Recent by-elections in other states also show the BJP is losing ground in some of its strongholds.

However, the opposition parties are still in a disarray and lack the fighting power the farmers have shown. So, some more innovative polarizing to retain the Hindu voter base might do the trick again. There has been an uptick in attacks on Muslims and their livelihoods. Arrests and harassment of Muslims are on the rise. At public meetings, Hindu supremacists now openly call for genocide. Social media is rife with disinformation and increasingly outlandish conspiracy theories demonizing Muslims. Adityanath has been warning the “Taliban”—a slur, like “jihadi” and “Pakistani,” used to refer to Indian Muslims—that the “airstrike is ready” if they move on India.

Manufactured outrages like these have delivered in the past. But for them to work, matters of legitimate outrage have to be first put to rest. That’s what Modi is hoping to do with his faux apology and offer to repeal the farm laws, leaving himself just enough time to sow and reap a new harvest of hate and votes. 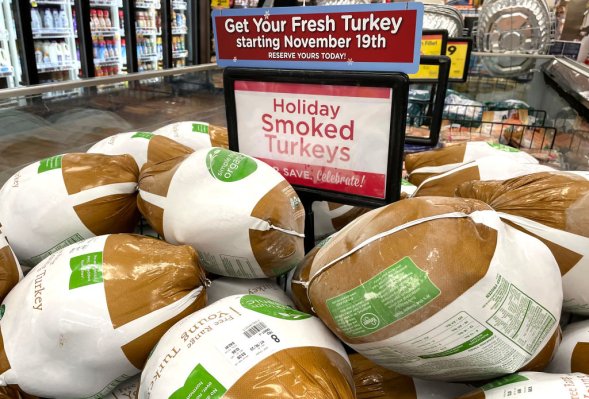 Why We Should Stop Freaking Out About Inflation
Next Up: Editor's Pick