Why Joe Biden Needs to Worry About Yams

White House chief of staff Ron Klain is about as shrewd a political player as you’ll come across in Washington. Having worked in all three branches of the government over nearly four decades in this town, he knows both the mechanics and mentality of success as it is measured inside the Beltway. He is also keenly aware that, sometimes, facts are irrelevant to the politics of the moment.

So when Klain offered his assessment of the mood of the electorate earlier this month, it was impossible to ignore the challenge he laid out for fellow Democrats. “We have a lot of work left to do,” Klain conceded to CNN on Nov. 11, “and I think voters are in a show-me-don’t-tell-me mode.”

In other words, Klain and his boss, President Joe Biden, are right to be skittish about their pole position as they head into the Thanksgiving holiday as everything—gas to get home, staples to make the meal, the electricity to run the dishwasher—is costing way more than it did even a few weeks ago. And that, more than anything being proposed on the floor of the Senate, is the most real thing for voters right now, and that doesn’t bode well for Democrats. During last month’s off-year election for Governor of Virginia, 33% of all voters said the economy was the top issue, and among that slice the GOP candidate enjoyed a 10 percentage point advantage.

The mindset is not without merit. Prices over the last year climbed at their fastest click since November of 1990, a staggering 6.2%. Even without the often-fluid costs of food and energy, the cost increases year over year jumped at the fastest gallop since August 1991, a still-steep 4.6%.

The causes of the eye-popping inflation are many and varied, from a year of low-spending lockdown and new government direct payments yielding higher savings accounts, to a reset of wages for some workers and a Wall Street surge that has helped investors. The easiest place to place the blame is on a backed-up shipping system that has exacerbated shortages in supplies. But inflation is a complicated mess, part of a global development that Biden can do little to fix—and that he’s blamed for anyway.

And as much as some economists, including Treasury Secretary Janet Yellen for now, have clung to the claim that this is a “transitory” period of higher costs for goods and services, that analyses doesn’t change the undeniable fact that even with increased wages of the pandemic, paychecks aren’t covering as many slices of pumpkin pie as they did last year. In fact, government data show real wages have actually gone down 1.1% over the last year as the buying power of a dollar has shrunk.

Klain and his team get it. Voters act on feelings, not facts, and so healthy macroeconomic trends, like adding jobs and growing the economy, matter less than the price of milk. That’s why you see Biden’s team and fellow Democrats from coast to coast looking to position last week’s party-line victory in the House on a massive social-spending bill as an antidote to inflation. Senate Majority Leader Chuck Schumer is using inflation as one of the selling points for his fellow Democrats to fall in line on Build Back Better.

The White House and its allies have been touting a letter by several Nobel laureates endorsing the plan as a way to curb rising prices and have emphasized how it would lower costs in family budgets, such as pre-K and prescription drugs. As the President himself tweeted last night about that letter: “Not one, not two, not sixteen—seventeen Nobel Prize-winning economists agree that my Build Back Better Act will ease longer-term inflationary pressures and grow our economy.”

The House win may give Biden a chance to finally find his footing in Washington and recast the board for the roughly 10 months before his fellow Democrats face voters in 34 Senate races and all 435 House districts. That doesn’t mean next year’s midterm elections—already dreaded among Democrats, who are bracing for deep losses—won’t still be a referendum on Biden and his party. Inflation merely makes Democrats’ performance a tougher pitch, especially to earners who have endured a real-time pay cut.

Historically, the party in the White House faces a deep hit in the first-term’s midterm audition with voters. There have been 13 times a new President has had a first midterm check-in with voters since World War II and only once has the electorate not rendered a painful verdict in the House. Setting aside the one exception—2002, when voters were still behind George W. Bush in the wake of the 9/11 attacks—the party in the White House has lost an average of 30 House seats. House Speaker Nancy Pelosi currently has an eight-vote majority, meaning the gavel switches if she loses a net of five seats. (The House has one open seat at the moment, although Democrats are expected to retain it.)

The Senate math is slightly more forgiving with the incumbent party in the White House spared setbacks four times in the same period in their first go with voters, but still facing an average net loss of three seats. But that chamber currently stands at a 50-50 split, meaning even one seat lost gives Republican Leader Mitch McConnell control of the chamber again. That helps explain why each Democratic Senator has instead been aggressively pushing their work on a broadly popular bipartisan infrastructure plan that Biden has already signed into law. (Don’t believe it’s popular? Arizona’s Republican Gov. Doug Ducey, who may be a presidential contender himself, is promoting it.)

What does this political history have to do with the costly cranberry sauce and candied yams? History shows running against inflation is also a winning strategy, dating back to 1946’s midterms. As wartime price controls ended, inflation grew from 2.7% on the day Japan surrendered in 1945 to 14.9% when voters went to the polls the following year. Republicans ran against Harry Truman, who ended World War II victorious, with the anti-inflation slogan “Had Enough?” It swung 55 seats in the House and 12 in the Senate.

The price hike doesn’t even have to be steep to be a political liability. Lyndon Johnson’s Great Society programs pushed inflation from 1.3% when he became President to 3.8% when his party faced voters in 1966, losing 48 House seats and four in the Senate. The frustrating stagflation of the 1970s—plus Watergate and an OPEC crisis, to be fair—cost House Republicans in 1974 and then House Democrats in 1978 alike as they traded the White House in a lousy economy.

That’s the thing about inflation: it’s a deeply personal experience that hits all Americans and, with few exceptions, every swipe of the debit card. Its degree matters less than its emotional impact. Americans right now are already feeling its effects and tightening their belts heading into the holiday season. As much as Klain and Co. are pushing an everything-is-fine message—a big turkey only costs $1 more this year over last, the Agriculture Secretary is reminding people — no one cannot deny that the holiday staples are up by 5% by the government’s own accounting. (The Farm Bureau finds its more generous table to cost 14% more.)

That adds up, whether you’re a family who were already on the brink a year ago, or a President jetting off to Nantucket tomorrow.

Finally, a note about The D.C. Brief: the newsletter is taking a break for the holidays but will be back the week of Nov. 29. 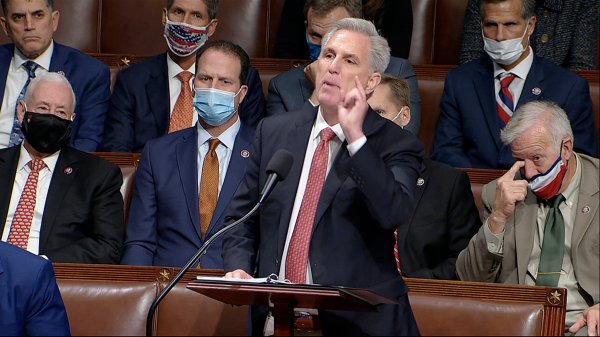 A Long, Trumpy Audition
Next Up: Editor's Pick