China Is Trying to Make the Tennis Star Peng Shuai's #MeToo Allegation Disappear. It's Not Working

When Chinese tennis star Peng Shuai went public with a bombshell sexual assault accusation against a retired top official, China’s response was to censor all discussion of the allegation internally—and dismiss growing international concern over Peng’s whereabouts and safety.

She reemerged over the weekend in a series of appearances—in videos, photos and then in a video conversation with International Olympic Committee (IOC) President Thomas Bach.

The appearances seem to answer immediate concerns about her well-being, but have done nothing to address the questions about her allegations—or what consequences she might face for airing them.

And they have not stopped the Women’s Tennis Association, which catapulted Peng’s story into the international spotlight, from demanding an explanation from China. WTA CEO and Chairman Steve Simon told CNN Thursday that the organization is “willing to pull our business and deal with all the complications that come with it.” Simon previously touted a $1 billion investment by China into women’s tennis.

Peng’s allegation is believed to be the first of its kind directed at a high-ranking Chinese government official. The controversy is putting a spotlight on China’s #MeToo movement and the treatment of sports stars who speak up, just months before the country opens the 2022 Winter Olympics.

Here’s what you need to know about Peng Shai and her accusations.

Who is Peng Shuai?

A native of the mountainous province of Hunan, Peng, 35, is the first Chinese tennis player to achieve a top ranking after she became the world’s No. 1 doubles player in 2014.

She has won 23 tour-level tennis doubles titles. These include Wimbledon in 2013 and the French Open in 2014—both with Taiwanese player Hsieh Su-wei.

Peng also represented China three times in the Olympics, most recently in 2016.

What is Peng alleging?

A post that appeared on Peng’s Weibo account—China’s Twitter-like platform—on Nov. 2, said that retired Vice Premier Zhang Gaoli—once part of the powerful Politburo Standing Committee, China’s top decision-making body—coerced Peng into having sex with him. The post said she later had an on-off relationship with the Chinese official.

The message disappeared about 30 minutes after being posted. However, screenshots were widely shared on social media platforms outside China, as well as on private WeChat and iMessage groups in the country, according to Reuters.

The post said Peng’s relationship with Zhang dated back to 2011. But about three years ago Zhang and his wife invited Peng over for dinner, and he pressured her into having sex.

After that, their relationship restarted—but Peng reportedly got angry over Zhang’s insistence on keeping their relationship secret, and had tried to meet him to air her grievances before she posted on Weibo, according to the message.

Peng said she could not provide any evidence to support her allegations. TIME could not independently verify either the post or its contents.

Did Peng disappear? Is she safe?

After posting the message, Peng made no further public statements and was not seen publicly, prompting concerns about her safety in a country that has swiftly silenced even the most famous and powerful public figures—including Alibaba founder Jack Ma.

On Nov. 18, state-owned broadcaster CGTN released a screenshot of a statement that was purportedly an email from Peng to Simon. Peng’s message said she was safe and added that she has just been “resting at home.” The message also said sexual assault allegations attributed to her were false.

The next day, Nov. 19, a state TV employee posted on Twitter—which has long been banned in China—photos of Peng reportedly in her home, which were posted to her WeChat. Shen Shiwei, the employee, said the photos were shared by Peng’s friend.

On the same day, the IOC revealed that Peng had a video call with officials from Olympics governing body. During the call, Peng reportedly said she would like to have her privacy respected at this time.

“I was relieved to see that Peng Shuai was doing fine, which was our main concern,” said Emma Terho, Chair of the IOC Athletes’ Commission, in the IOC statement. “She appeared to be relaxed. I offered her our support and to stay in touch at any time of her convenience, which she obviously appreciated.”

The initial statement purportedly from Peng did not stop further questions. Simon told CNN Thursday he felt the email was a “staged statement” since he responded immediately after without receiving a proper reply. In his interview with TIME, Simon added that they have worked “every method available” to communicate with her directly—to no avail.

The WTA CEO and chairman also deemed the videos “insufficient” to assure Peng’s safety and wellbeing. “While it is positive to see her, it remains unclear if she is free and able to make decisions and take actions on her own, without coercion or external interference,” he said in a statement.

The United Nations and the White House on Nov. 19 joined growing international dissatisfaction over the lack of independent proof of Peng’s wellbeing and whether China will address her allegations against Zhang.

How are Chinese officials handling the claims?

State-controlled media has largely been silent on Peng’s allegation, and officials have worked to swiftly censor any conversation about her post. Searching for Peng’s account on Weibo was blocked and commenting on her account was suspended.

When a Chinese foreign ministry spokesperson was asked about the athlete’s allegations on Nov. 3, he said he was unaware of the issue. TIME has reached out to China’s State Council Information Office for comment.

A public allegation against a high-ranking official of such magnitude is virtually unheard of, but other Chinese women have reported sexual violence committed by low-ranking party officials, says Leta Hong Fincher, author of Betraying Big Brother: The Feminist Awakening in China.

“Everybody knows about that kind of culture,” Fincher says. “But this is the first time we’ve actually had a specific accusation aimed at an extremely senior retired Communist Party official. Nonetheless, he’s retired, but he was the vice premier. And it’s very hard to go any higher than that other than the president of China himself.”

The swift censorship of Peng’s case is a contrast to how China handled other prominent #MeToo cases this year. When Chinese beauty influencer Du Meizhu accused Canadian-Chinese pop idol Kris Wu of raping her and other women, including minors, it became a hot-button topic on Weibo, with state media even berating the idol.

The response to Wu was in line with a crackdown on celebrity culture, which observers believe is an attempt to keep youth partial to Communist ideology.

How is the global tennis community reacting?

The WTA has called on the Chinese government to seriously look into the allegations against Zhang. The men’s tennis governing body (ATP) backed the probe.

The WTA chair lauded Peng for voicing those allegations “knowing full well” what the results will be. “For us to not support that and demand justice as we go through it—you know we have to start, as a world, making decisions based upon right and wrong,” Simon told CNN.

Other tennis stars expressed concern over Peng’s absence, including former world No. 1 players Serena Williams, Chris Evert and Billie Jean King. Novak Djokovic, the current men’s world No. 1 described Peng’s case as “shocking.” Naomi Osaka decried the censorship of Peng and said she hopes the Chinese player and her family are safe.

How is this affecting the Winter Olympics?

Beijing only has months left before the start of the Winter Olympics. Pressure is mounting on China amid calls to boycott the Games over concerns about China’s human rights record, as well as geopolitical tensions—and Peng’s case may only make those calls louder.

Prior to the IOC’s video chat with Peng, the organization kept largely quiet on her case.

President Joe Biden earlier said the U.S. is considering a “diplomatic” boycott—meaning officials will not visit Beijing for the opening of the 2022 Games in February. A Chinese foreign affairs ministry spokesperson responded: “Politicizing sports violates the Olympic spirit and undermines the interests of all athletes.”

What does this mean for the future of Chinese tennis?

Tennis is a big deal in China: more than one-fifth of the world’s 87 million tennis players come from the country, according to the International Tennis Federation.

It is unclear how calls for Chinese action in Peng’s case will affect tennis in the country. But China has repeatedly retaliated against criticism, most notably in 2019 when broadcasts of the NBA were halted on Chinese television after then-Houston Rockets general manager Daryl Morey posted a tweet expressing solidarity with Hong Kong pro-democracy protesters.

Read more: Why China Has the NBA in a Full-Court Press on Free Speech

At risk could be a 10-year-deal to hold the women’s season finals in Shenzhen, which are set to resume in 2022 as the COVID-19 pandemic wanes. Chinese organizers behind the agreement had invested $1 billion as part of the deal.

But the WTA chair said he was more concerned about Peng’s welfare and the integrity of the sport. “We’re at a crossroads with our relationship, obviously, with China and operating our business over there,” he told CNN. “It’s something that’s actually very sad because we have some amazing relationships over there and developed some unbelievable programs that are really introducing the sport to a lot of young Chinese players that want to become the next Li Na or the next Peng Shuai.”

The original version of this article misquoted an email purportedly from Peng published in Chinese state-run media. It said Peng was “resting at home,” not “staying at home.” 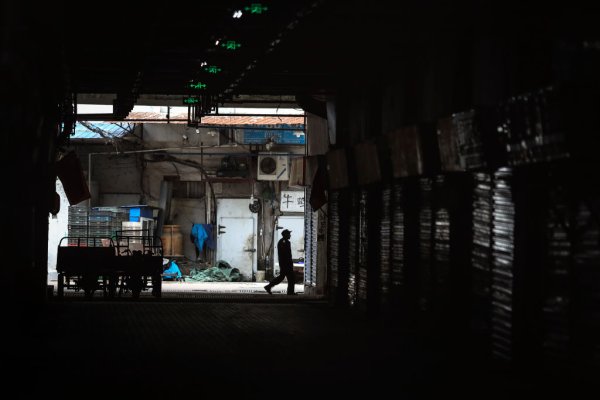