On the surface, the jury’s Nov. 19 verdict in the trial of Kyle Rittenhouse was all too simple. His defense team successfully pled the case that Rittenhouse was acting in self-defense when he shot and killed two people during a night of protests and unrest in Kenosha last August.

But Rittenhouse’s reasons for being in Kenosha, then-roiled by the police shooting of Jacob Blake, and the lack of accountability that’s being placed on his behavior is something criminal and racial justice activists are deeply concerned—and wholly unsurprised—about moving forward.

During an interview with Fox News broadcast on Nov. 22, Rittenhouse claimed that he supports the Black Lives Matter movement, and argued that his case had nothing to do with race. (While the circumstances were, broadly, related to a collective response to racial justice and police brutality, Rittenhouse and all three men he shot are white.)

However, according to some activists, the ramifications of his trial are less about Rittenhouse as an individual, and more about what he is now seen as representing—an opposition to protests and protesters that isn’t less about protecting property or supporting law enforcement, and more about a deep-seated disdain for racial equality.

The impact of Rittenhouse’s trial will be seen in “what happens when the people who respond to injustice are confronted by those who don’t agree with the response,” Dr. Amara Enyia, a public policy expert with Movement 4 Black Lives (M4BL) tells TIME. “This verdict is more about those who disagree with people who are protesting for whatever reason. It sends a message to those people—that they can get involved in ways that are reckless.”

“The jury’s verdict upholds white supremacy, even though the victims were white. The underlying issue was about the power of Black people to push back against police violence,” argues Delores Jones-Brown, a former criminal justice professor at John Jay College in New York.

Blake, a 29-year-old Black man, was shot and paralyzed during a confrontation with police officers on Aug. 23, 2020. (The officers involved have not faced any criminal charges.) To many, the incident was yet another example of the injustices that often befalls Black civilians during encounters with the police—and resonated even more after George Floyd’s murder and the killing of Breonna Taylor.

“[Like with] many issues that people feel like are so important,” Enyia says of racial justice protesters, “the only way that they can get the attention of the powers that be is by being out in the streets engaging in their First Amendment rights.”

And it didn’t take long after news of Blake’s shooting broke for protests and unrest to spread across Kenosha. In addition to peaceful protests and demonstrations led by local organizers, individuals engaged in violence and property damage. On Aug. 24, 2020, the Wisconsin National Guard was sent to the city.

These are the circumstances that Rittenhouse arrived in, ostensibly to serve as a medic for people injured in clashes between protesters and counter-protesters, as well as to guard businesses deemed at risk of looting or property crimes. Regardless of his initial intentions, activists believe that his presence served to escalate tensions—to a fatal point. Before the night was out, Rittenhouse had fatally shot two men and injured a third. During his trial, Rittenhouse and others testified that his first victim, Joseph Rosenbaum, had initiated a conflict; Rittenhouse claimed he shot in self-defense. As he fled the scene, he then engaged physically with Anthony Huber, who was killed, and Gaige Grosskreutz, who was injured. Both of these men were armed.

“I think for white protesters, this may be their first brush with the idea that if you [are] for social justice or racial justice, you are at great risk that the system is willing to harm you,” Jones-Brown says. And activists are now concerned this verdict could “give license” and send a message to others that may identify with Rittenhouse’s actions. “It actually emboldens them. It sends a message that they will not be held accountable for their behavior and decision-making,” Enyia adds.

This in turn will most likely impact Black people engaged in protest work to a much larger extent than their white peers or “allies.”

“These are the same voices that vilify Black protesters fighting for racial justice and defend state-sanctioned police violence against them. Rittenhouse is one person, but his actions are intrinsically tied to a web of white supremacist rhetoric and the nation’s longstanding history of anti-Black violence,” Rashad Robinson, president of the civil rights activists group Color of Change, said in a Nov. 19 statement.

“For those of us who believe in protest and who believe in the need for protest as a tool toward the end of systemic and structural injustice, it won’t stop us,” Enyia tells TIME. “Protesting is a tool and we will continue to use it.”

Other racial justice activists speaking with TIME in response to the jury’s verdict likewise say it will not impact their advocacy. But it presents serious complications, and may well change their tactics—forcing those on the ground protesting on the defense, focused on assessing potential threats and protecting themselves as well as uplifting their cause.

In some cases, this might mean carrying a legal firearm. (An August survey from the Armed Conflict Location & Event Data Project revealed that demonstrations involving armed individuals are “nearly six times as likely to turn violent or destructive,” when compared to those that take place without firearms.) It could also mean that more organizers are trained in de-escalation tactics. The big takeaway is that this is another reminder that activists and protesters can’t rely on the system itself to protect them.

Furthermore, it reinforces the dangerous dichotomy that those protesting against white supremacy and racial violence will be at greater risk of it for calling it out.

The original version of this story misstated the person who Kyle Rittenhouse engaged with and killed. It was Anthony Huber, not Joshua Ziminski. Ziminski is alive. 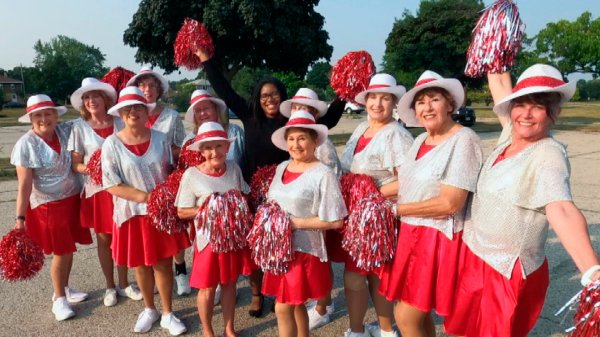 3 'Dancing Grannies' Among Dead in Parade Crash
Next Up: Editor's Pick