This cow—on a beach in Zanzibar—was not part of the methane emissions study, and may or may not be a seaweed eater.
Getty Images/iStockphoto
By Aryn Baker

Getting calories out of grass is not easy. That’s why cows and other ruminants, like goats and sheep, have multiple compartments in their stomachs to help them digest their food. One of those stomachs is populated by microbes that help break down plant matter into a more digestible form. The process, called enteric fermentation, also produces methane, a potent greenhouse gas that is 80 times more efficient at heating the atmosphere than carbon dioxide over the first 20 years it is in the atmosphere, before it breaks down into other compounds. A single cow releases around 250-500 liters of methane a day. There are approximately 1 billion cows used in the global meat and dairy industries, and, combined with other animals raised for livestock, are responsible for releasing the methane equivalent of some 3.1 gigatons of carbon dioxide into the atmosphere every year. If cows were a country, they would be the world’s third-largest greenhouse-gas emitter, behind China and the U.S., and ahead of India.

At the COP26 climate conference held in Glasgow last week, more than 105 nations pledged to reduce methane emissions by 30% by 2030. Most countries’ pledges focused on tamping down on their oil, gas and coal industries, which are responsible for a third of human-caused methane emissions—only a few plans focused on tackling agricultural sources of methane, which contribute 42% of the global total of the greenhouse gas.

Read more: A Methane Pledge Is the First Good News Out of COP26. Nothing Else Will Be as Easy

The Intergovernmental Panel on Climate Change, the United Nations’ premier climate body, recommends that humans consume less meat and dairy as a way to reduce global warming. But getting humans to change their eating patterns is difficult. Tackling the issue at its source—in this case, the cows themselves, could be far easier.

Scientists have developed multiple approaches for capturing bovine emissions, from masks fitted for cow noses that restrict the amount of methane the animals’ burps release into the atmosphere to ingenious, but misguided, plastic backpacks designed to trap cow farts. (For what it’s worth, most of the methane produced by cows is released through belching, only 5% comes out of the other end). Farmers are selectively breeding lower-emitting cows, and some veterinary scientists are working on a vaccine that targets the methane-emitting bacteria in cow guts while leaving more beneficial (and less polluting) microbes alone.

The best solutions, however, start at the source, with feed additives. In September Brazil and Chile approved the use of Bovaer, a synthetic feed supplement developed by Dutch bioscience company DSM that reduces methane emissions in dairy cows by 30%, and up to 80% in beef cattle. But the supplement is an added cost for farmers, and unless there is an incentive—either through government regulations, subsidies or market demand—its use is not likely to be widespread.

Agriculture scientists are also looking for cheaper and more effective natural solutions. They may have discovered it in an ingredient rarely found near cow pastures: seaweed.

In 2020 Australian researchers found that replacing 3% of a cow’s diet with a type of seaweed native to Australia resulted in up to an 80% decrease in methane emissions. Now researchers in Ireland and the United Kingdom are trying to find out if their local variant does the same. Scientists at the Institute for Global Food Security at Queen’s University Belfast are launching a €2 million project to monitor the effects of feeding local seaweed to dairy cows. Sharon Huws, a professor of animal science and microbiology, and lead scientist on the project, says she expects to see at least a 30% reduction in methane emissions, and hopes to see more.

“Using seaweed is a natural, sustainable way of reducing emissions and has great potential to be scaled up,” say Huws. “There is no reason why we can’t be farming seaweed.”

Read more: The Cow That Could Feed the Planet

Feeding cows seaweed may seem like a drop in the bucket compared to the overwhelming impact of global greenhouse gas emissions. Not so, says Sarah Ann Smith, director of the so-called “super-pollutants”(meaning methane) program at the U.S.-based Clean Air Task Force. Even cutting 30% of emissions from enteric fermentation would lead to a massive reduction in atmospheric methane, she says—about 11% of the total. That’s on par with the annual emissions produced by all global landfills—which make for a far more complicated source to tackle. “The reality,” she says, “is that we are at a point on climate change where we have to throw all this spaghetti at the wall and see what sticks.” Current projections show that meat consumption globally is going to rise, she points out. “We don’t have the luxury of picking and choosing anymore, we need all the solutions on the table.”

Or, as the case may be, in the feeding trough. 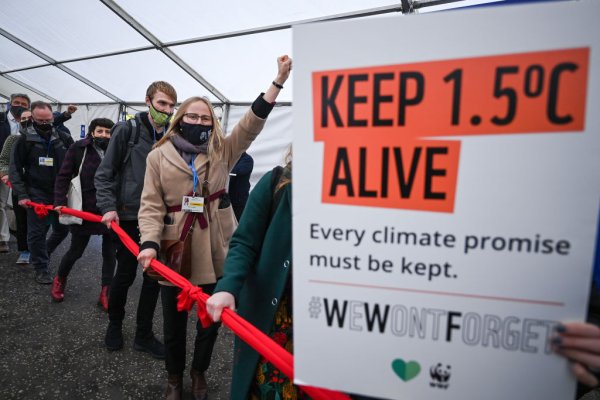 Why It Feels So Hard to Understand What Happened at COP26
Next Up: Editor's Pick