Outgoing Philippine president Rodrigo Duterte finalized his candidacy Monday for a senate seat in elections scheduled for May 2022, just days after his daughter Sara Duterte-Carpio filed her bid for the vice presidency.

The move is seen as an effort by the Dutertes to enhance their prominence in a country notorious for its dynastic politics—as well as an attempt by the the 76-year-old leader to evade accountability for his war on drugs. The brutal crackdown has left more than 20,000 dead, by some estimates, and seen Duterte become the focus of an International Criminal Court probe.

Philippine presidents enjoy legal immunity while in office, but are constitutionally barred from serving more than a single six-year term. While immunity won’t continue in the senate, securing a seat in the upper chamber would still afford Duterte important protections: privilege from arrest for certain crimes while congress is in session, and formidable political clout.

“Maybe he still wants to be in the mix—to be a Senate President, to still be a player,” says Richard Heydarian, associate professor of politics at the Polytechnic University of the Philippines.

Read More: The Philippine Elections Will Be a Test of Rodrigo Duterte’s Legacy

True, Duterte may have to surrender his dream of a dynastic successor—at least for now. His daughter, Duterte-Carpio, has been edged out of the top spot in pre-election polling by the son (and namesake) of late dictator Ferdinand Marcos, who is now the top choice to become the Philippines’ next leader.

But by not vying with Marcos Jr., and instead standing for vice president alongside him, Duterte-Carpio will bolster the positions of both families in the country of 110 million.

The Dutertes “have now settled for silver,” Heydarian tells TIME. “It seems contesting the gold would be a lose-lose for both sides, because that would have split the vote of the pro-administration side between the Marcoses and the Dutertes.”

For Philippine voters, however, the long-standing problem of dynastic politics remains. If she wins the vice presidency, Duterte-Carpio might also shield her father from legal battles, ensuring a long wait in store for those hoping for swift justice for abuses carried out during his bloody reign.

Dynastic politics in the Philippines

Global politics is rife with dynasties, from the Shinawatras of Thailand, to the Bushes and Kennedys of the U.S., and the Nehru-Gandhis of India. But what makes the Philippines unique, according to the dean of the Ateneo School of Government (ASOG), Ronald Mendoza, is the sheer extent to which such families run the country—even though the constitution specifically requires the state to “prohibit political dynasties as may be defined by law.”

“I don’t think it’s matched anywhere else in the world,” he tells TIME. As if to prove the point, Duterte’s two sons are eyeing congressional and mayoral seats in the upcoming elections.

Research by ASOG showed that 80% of the governors, 67% of congressmen, and 53% of mayors who won office in the 2019 Philippine elections belonged to “fat dynasties”—the name given to families holding multiple elective posts.

Many businesses are also concentrated in the hands of relatives or cronies of political families, adds Mendoza, who observes “blatant” increases in wealth among politicians while in office. “The overlap between politics and economics is not a very healthy one, because it’s the same overlap that will actually snuff out competition,” he says.

A report by the Philippine Center for Investigative Journalism in 2019 claimed to find spikes in the wealth of members of the Duterte family after they entered public office. The family denied wrongdoing, countered that the money came from private ventures. But whatever the truth, it seems clear that rule by political families has been generally associated with negative outcomes—whether in the Philippines or elsewhere.

Dynasties tend to thrive in the poorest Philippine regions, where politicians find it easier to wield patronage. Once in office, families gain access to government coffers. That’s why the fight for regional power can be stiff, and in areas with two or more competing clans, it can even become bloody: the warring of two political families in the southern province of Maguindanao caused the deaths of 58 people, including 32 journalists, in 2009.

Bills have been proposed to impose term limits on government officials who are related to each other, but these have languished when tabled before congressmen—many of whom belong to political dynasties themselves.

The Duterte family on the national stage

Duterte-Carpio was vice mayor to her father in 2007, during one of his terms as the mayor of the southern Philippine city of Davao, and she is the city’s mayor today. With her vice presidential bid, she will be hoping to make the same leap into countrywide politics that her father did in 2015.

If she succeeds, and if her brothers follow the same path, the Dutertes may emerge as the next national dynasty of consequence.

The other Duterte children certainly don’t seem short of ambition. Paolo Duterte has faced accusations from political opponents of links to drug smuggling and organized crime—allegations that he was eventually cleared of—but he has managed to acquire congressional experience and for a time was deputy speaker of the house for political affairs. The youngest sibling, Sebastian, was elected vice mayor of Davao City in 2019.

Critics argue that family politics, and the machinations of the leading dynasties, are ultimately a distraction from the real issues facing the Philippines—from pandemic recovery and graft to lagging infrastructure and poverty—preventing the emergence of the kind of leadership required to take the country forward.

Says Mendoza: “What we get is the telenovela that captures our imaginations and distracts us from the deeper questions that we must ask them to answer in order to be better judges of who would be the best leader for us in May 2022.” 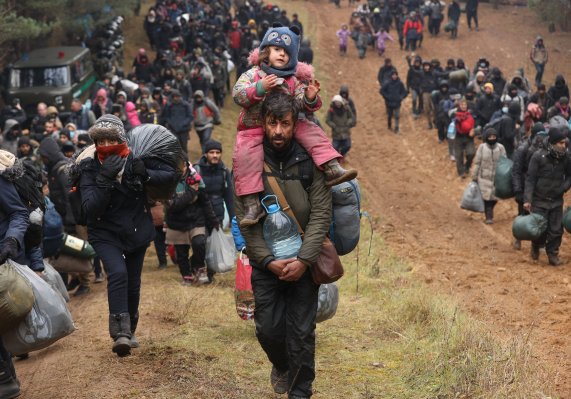 How the Belarus-Poland Dispute Became a Geopolitical Crisis
Next Up: Editor's Pick