The U.S. and Its Allies Are Weighing Reprisals If Russia Invades Ukraine

The U.S. and its European allies are discussing potential responses if Russian President Vladimir Putin takes military action against Ukraine, including fresh sanctions on Moscow and further security assistance for Kyiv.

Senior U.S. officials have raised the idea of a package of measures in discussions with European counterparts over the past week, telling them the Biden administration is already working up a menu of options to counter possible moves by Russia, according to people familiar with the discussions.

The planning is at an early stage even within the U.S., and would require more discussions before seeking the support of other countries. But it comes after U.S. officials raised the alarm that Russia may be weighing a potential invasion of Ukraine as tensions flare between Moscow and the European Union over everything from migrants to energy supplies. The Kremlin denies any such intention.

The effort is also aimed at steering Putin away from further aggression on Ukraine by making clear there would be a strong and coordinated response, two of the people said. They declined to specify what might be included, but with heavy sanctions already on many parts of the Russian economy including its defense and finance sectors, one area left to attack might be energy. A White House spokesperson declined to comment.

Russian troops on the Ukraine border

Putin has parked large numbers of troops near the Ukraine border previously, including earlier this year when he sent more than 100,000 troops, as well as tanks, warplanes and warships, to Crimea and other areas. He resisted for weeks as Kyiv and western nations called on him to de-escalate, before pulling troops back in late April.

The latest frictions come against a broader backdrop. Not only are troops massing again (Ukraine President Volodymyr Zelenskiy said last week that Moscow was “concentrating nearly 100,000 soldiers” near the border), but record-high gas prices leave Europe vulnerable to Russian largess on supplies. EU members including Poland have also accused Russia of encouraging a refugee crisis as its ally Belarus funnels migrants toward the bloc.

French President Emmanuel Macron told Putin he defends Ukraine’s sovereignty in a phone call Monday that also addressed the migrant crisis. But Putin blasted the government in Kyiv in the call for its recent use of a drone against Russian-backed separatists and denounced recent U.S. and allied naval exercises in the Black Sea as “provocative,” the Kremlin said.

Read More: Ukraine’s President on Why Russia Has Sent Troops to the Border

“We see an unusual concentration of troops and we know Russia has been willing to use these types of military capabilities before to conduct aggressive actions against Ukraine,” North Atlantic Treaty Organization Secretary General Jens Stoltenberg told reporters Monday. “This military build-up also reduces any warning time between a decision in Russia before they’re able to conduct a military aggressive action.”

The Kremlin Friday dismissed talk of a potential invasion as “unfounded,” saying troop movements on its own territory were a domestic matter. People close to the Kremlin have said Putin aims to send a clear message to the West that Moscow won’t tolerate any further expansion of NATO military ties with Ukraine, but isn’t seeking a wider war.

The spring crisis on the border eased after Biden called Putin and offered a summit, which took place in June. But Ukrainian officials say the Kremlin didn’t pull back all of the forces it massed at that time.

“After the last military exercises in the border the Russian troops withdrew,” EU foreign policy chief Josep Borrell told reporters after a meeting of foreign ministers in Brussels Monday. But the Russian forces didn’t remove their equipment, he said, “so they can deploy quickly because the heavy material is already in place.”

A similar package of possible countermeasures to the one now under discussion was developed by the U.S. in the spring but not implemented, according to two of the people. The EU assigned its foreign affairs service to craft options earlier this year to respond to any further Russian moves but those efforts stalled, one person added.

This time, the U.S. is preparing to share with allies more of the information that’s triggered its worries, to build support for a joint response, according to two of the people.

Activists of far-right movement Right Sector, who are participants in the war against Russia-backed separatists in the east of Ukraine, hold placards and flags as they shout slogans during their rally called "Stop the creeping occupation!" outside the office of Ukrainian President Volodymyr Zelensky in Kiev on November 4, 2021.
SERGEI SUPINSKY/AFP via Getty Images

After a meeting with their Ukrainian counterpart in Brussels Monday, the foreign ministers of France and Germany warned in a joint statement that “any new attempt to undermine Ukraine’s territorial integrity would have serious consequences.”

Ukrainian Foreign Minister Dmytro Kuleba said, “We agreed that certain communication will be conducted with Russia to demotivate it from any aggressive moves.”

The U.S. dispatched Central Intelligence Agency Director Bill Burns to visit Moscow in early November to convey its concerns about the buildup. He spoke by phone with Putin but there was no apparent sign of change in direction from the Kremlin.

Tensions between Russia and Ukraine first blew up in 2014, when Moscow annexed the Crimean Peninsula and backed a separatist rebellion in the east of the country. That triggered sweeping U.S. and European sanctions, but the conflict has continued, killing more than 13,000 people in east Ukraine.

—With assistance from John Follain, Daryna Krasnolutska and Kitty Donaldson 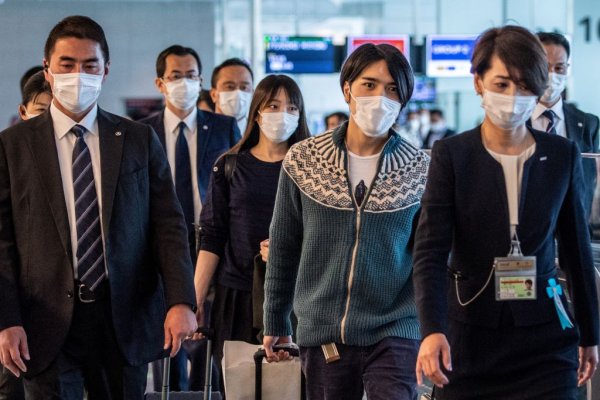 Former Princess Mako and Husband Begin New Life in the U.S.
Next Up: Editor's Pick