The Russian military conducted a missile test Monday that obliterated a dead satellite and generated a cloud of debris in outer space that forced astronauts aboard the International Space Station to temporarily take shelter, according to U.S. officials.

“The Russian Federation recklessly conducted a destructive test of a direct-ascent, anti-satellite missile against one of its own satellites,” Secretary of State Antony Blinken said in a statement. “The long-lived debris created by this dangerous and irresponsible test will now threaten satellites and other space objects that are vital to all nations’ security, economic and scientific interests for decades to come.”

As thousands of pieces of the satellite began to spread, the American, German and Russian astronauts aboard the International Space Station (ISS) were instructed to pull on their space suits and take shelter in preparation for a possible impact. Objects in space tear through the cosmos at up to 17,500 miles per hour, which means that even the smallest piece of debris poses a danger to the space station and satellites that are vital to the global economy, military and modern way of life.

NASA said the crew members made their way into the spacecraft shortly before 2 a.m. Eastern time and remained there for about two hours. The ISS continues to pass through, or near, the debris cloud every 90 minutes, but the astronauts only needed to shelter for the second and third passes of the debris based on NASA’s risk assessment, the space agency said.

Brian Weeden, a former Air Force officer and expert in space security at the Secure World Foundation, said the situation could be “catastrophic” because of the high speeds involved. “A collision with an object several centimeters in size or higher could rupture the space station, potentially harming or endangering the astronauts on board,” he said. “That’s why they took shelter in the emergency lifeboat, just in case they had to make an emergency evacuation.”

It appears that Russia carried out a test of the PL-19 Nudol surface-to-space missile from the Plesetsk Cosmodrome, which is located about 500 miles north of Moscow, Weeden says. The Russian military has tested the missile at least 10 times since 2014 without ever hitting a target in orbit. This time, however, the missile blew apart an old intelligence satellite called Cosmos-1408 that was launched by the Soviet Union in 1982 and has been defunct for years.

Pentagon spokesman John Kirby told reporters Russia’s anti-satellite (ASAT) test was “an irresponsible act” that indicated a troubling trend. “We watch closely the kinds of capabilities that Russia seems to want to develop, which could pose a threat, not just to our national security interest, but the security of other space-faring nations,” Kirby said. “We’ve been very clear: we would like to see norms for space so that it can be used responsibly by all.”

Russia’s test marks the latest contentious development in space, which has become a new theater of hostilities between world powers, in addition to air, land and sea. A flurry of advancements by the U.S., Russia and China has altered the image of outer space as a peaceful sanctuary and instead stoked fears that an arms race has extended into the heavens.

Nations are developing spacecraft with offensive capabilities and deploying ground-based laser and communications-jamming equipment that can disrupt or damage satellites. Meanwhile, several countries, including the U.S., China and India, have tested ASAT missiles by blasting their obsolete satellites apart, as in Russia’s test Monday.

Despite the advancements of space weapons, however, there are few enforceable rules for military action in space. The 1967 Outer Space Treaty forbids countries from deploying “nuclear weapons or any other kinds of weapons of mass destruction” in space. But that language is broad and couldn’t foresee the technology now in use and development.

Read more: America Really Does Have a Space Force. We Went Inside to See What It Does.

The U.S. accused Russia twice last year of testing anti-satellite weapons: one direct-ascent missile and another on-orbit weapon. In 2007, China tested its anti-satellite weapons technology by targeting one of its own defunct weather satellites with a ground-based missile, sparking international outrage as the exercise blew the target into more than 3,000 pieces of debris which, the global space community warned, could menace other satellites for years to come.

It has since proved true. Just last Wednesday, the ISS was forced to fire up its thrusters and raise its altitude by about one mile in order to avoid a lingering piece of that 2007 wreck, which was on target to come uncomfortably close. The debris was not on a direct collision course with the station, but instead was on track to enter what NASA calls the “pizza box,” a 2.5 miles deep, 30 miles wide safety zone that the ISS maintains.

Anytime the pizza box is threatened, the station takes evasive maneuvers. This event marked the 29th time the station has been forced to bob and weave to stay out of harm’s way since 1999, but with the growing debris problem in low-Earth orbit, it is not remotely likely to be the last.

—With reporting by Jeffrey Kluger 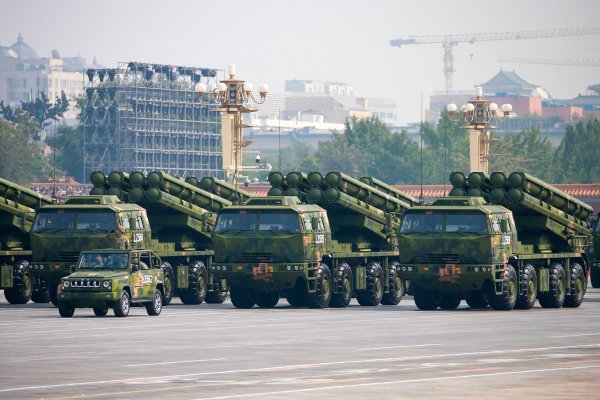 China Plans to Expand Nuclear Arsenal Faster Than Expected
Next Up: Editor's Pick