Chloé Zhao’s Eternals, released on Nov. 5, introduces one of the Marvel Cinematic Universe’s most diverse ensembles. It also brings the franchise’s first deaf superhero. In the new film, Makkari possesses super speed and is one of the titular Eternals—immortal beings with special powers who were sent to Earth to protect humanity from monstrous Deviants. Originally depicted as a white, hearing male in the Marvel comics, Makkari is a woman of color in Marvel’s latest movie and is played by the actor Lauren Ridloff, who is deaf. The character’s portrayal has sparked conversations both about onscreen representation of the deaf and hard of hearing community and about the need for greater accessibility in theaters.

Ridloff herself has spoken extensively on the two subjects. Regarding Makkari’s depiction, the actor has discussed how Deaf Gain, a term used in the deaf community to describe benefits that come from hearing loss, applies to the hero. Part of the superfast character’s power is the sonic boom created when she runs. Because Makkari can’t hear, the sonic booms do not faze her. They also did not faze Ridloff, who described in a Variety interview about being the only person on the Eternals set without earplugs while filming one particular scene.

Ridloff has also spoken about the need to normalize subtitles, which make movies more accessible to those in the deaf and hard of hearing community. For the premiere of Eternals in Los Angeles, Marvel Studios consulted RespectAbility, a disability-led nonprofit that aims to advance opportunities for people with disabilities, in an effort to host a more inclusive screening. Open captions were available with American Sign Language (ASL) interpreters present. But resources have been sparse elsewhere, with some in the deaf and hard of hearing community facing challenges in finding open caption screenings near them.

TIME spoke to members of the deaf and hard of hearing community about Makkari’s portrayal, the significance of Lauren Ridloff’s casting and the need for theaters to improve accessibility.

A step forward in representation

Delbert Whetter, a deaf producer who is the vice chair of RespectAbility’s Board of Directors, says that a strength of Makkari’s portrayal is that her disability is one of the superhero’s many features and not her defining trait. “A lot of times when people think about trying to develop characters with disability they find a way to connect it with the story,” Whetter tells TIME. “But her disability is not connected to the plotline.” Instead, it’s a part of Makkari that isn’t over-explained, he says.

Denny Tu, Chief Marketing Officer at IMAX Corporation who identifies as hearing impaired, feels similarly. “I think if you ask Makkari, I would guess she would say being deaf is the least interesting thing about her,” Tu says. He explains that beyond her deafness, the character is many other things: loyal and passionate, for instance, and “freaking fast.” Tu describes the experience of seeing the first deaf MCU superhero in IMAX as overwhelming. “Some of the biggest fans of Marvel are members of the deaf/hard of hearing community, myself included,” he says. In his eyes, Makkari’s depiction is the first of many crucial steps toward diverse stories being told authentically on screen.

The character also takes on special meaning in her identity as a superhero. “This is a bold break with previous stereotypical portrayals of deaf people as being somehow limited by deafness,” says Joseph J. Murray, president of the World Federation of the Deaf. “Past representations of deaf people onscreen have often been highly dramatized, with a focus on hearing loss as being tragic or insurmountable.” Murray, who is deaf, has not seen Eternals but discusses the significance of Makkari being a deaf superhero who uses sign language. “Many deaf children today face barriers to accessing natural sign language environments and deaf peers,” he explains. “I hope this film shows these kids a different way of living is possible, one in which deaf people are confident signers and fully equal to others around them.”

The use of sign language in the film—Makkari communicates in ASL—is also significant given the international reach of Marvel, says Whetter. “There are still countries that are fighting for recognition of their national sign language,” he explains. “Having a global property like the Eternals shown around the world to hearing people… you have to feel like that’s going to have some impact on how people perceive sign language.” A report from the World Federation of the Deaf shows that while 69 countries have legally recognized sign language, 124 have not. Lack of legal recognition is tied to obstacles including deaf people “not having equal and real-time access to information and communication in their daily lives,” according to the organization.

For Eternals, the visibility of ASL extends beyond the film. Whetter points to the example of Marvel’s action figure series portraying the immortal superheroes. In the toy rendering of Makkari, the character’s right hand is positioned in the ASL sign for “I love you.” “Even though it’s ASL, this is a sign that’s recognized all around the world—probably the most well-known sign around the world,” Whetter says. Now, deaf children will be able to see a superhero toy showing a sign familiar to them.

There is also cause for celebration in the deaf and hard of hearing community when it comes to Ridloff being chosen to play Makkari. “No one can tell our stories as well as we can,” says Phee Elizabeth, who is deaf and watched Eternals during its opening weekend where she lives in Bristol, England. “We have lived through disabled/deaf experiences, and no amount of research can share the first-hand knowledge that we have accumulated from living life while being deaf,” she says. Elizabeth also adds that while abled, hearing actors can “easily move onto abled roles,” the same is not true for disabled, deaf actors.

Ridloff’s casting also highlights the significance of intersectionality, as someone who is part of more than one marginalized group. The actor was born to a Mexican American father and an African American mother. “We don’t get many deaf characters, and if we do they are white men or white women,” says Krystel Hamilton, who is deaf and lives in Spokane, Wash., where she also watched Eternals on opening weekend. “Making this character a woman and person of color gave the deaf community a voice we wouldn’t have had otherwise,” Hamilton says.

On a larger scale, the diversity in the cast of Eternals has prompted efforts including partnerships between organizations that advocate for different underrepresented communities. RespectAbility is one of the founding partners of One Open, a spinoff of the Gold Open campaign launched by the nonprofit Gold House to ensure opening weekend success of Asian-led films. For One Open, the effort expanded to celebrate diverse ensembles of actors and filmmakers more broadly and was a collaboration with organizations including CAPE (Coalition of Asian Pacifics in Entertainment), NALIP (the National Association of Latino Independent Producers) and Color of Change, which advocates for the rights of Black people.

The call for open captions and greater accessibility in theaters

Eternals’ introduction of the MCU’s first deaf superhero has also prompted calls for more open caption screenings for people who are deaf and hard of hearing, which is one part of One Open’s campaign. Unlike closed captions, in which text appears individually to viewers—through devices like a pair of glasses, for instance—open captions give everyone the same viewing experience. “It’s not just deaf and hard of hearing people who benefit from open captions. It’s also for people that have English as a second language, it’s people that may have difficulty with auditory processing, or maybe they’re distracted easily by other sounds,” Whetter says. He explains that while devices like closed captioning glasses were a significant step in accessibility technology, there are constraints for the moviegoing experience. “There’s a limit to how many devices you have, for example, so if you want to fill a theater with deaf people, there may not be enough devices to go around,” Whetter says.

Hamilton shares of her past experience in screenings without open captions. “Normally, I have to rely on caption glasses, which hurt to wear and for me, almost always glitch halfway or towards the end of my movie,” she says. “I’d go to more movies if they had more open captions.” For Eternals, she says she found one AMC theater in Spokane that had open captions for the film. “They didn’t provide many showings with [them],” she says. “I was lucky to even find one for my showing.”

Elizabeth did not have the same experience. In Bristol, she says she could not find theaters with subtitled options for Eternals, so she watched without them. “I managed to fare as best as I could with just my hearing aids turned up to full and a lot of focusing, but I know a lot of deaf people won’t be able to do that,” she says. Elizabeth shares that her hearing aids amplify the slight hearing she does have, and describes the sounds as “extremely muffled.” She says that across England, there’s much work to be done in implementing accessibility measures in theaters. “Captions are a must, and so helpful, for TV and film because accents, certain words, certain dialects, all of that can trip me up so much and I often end up missing chunks of whatever I’m watching,” Elizabeth says.

As a film produced in Hollywood starring an American actor who is deaf, Eternals has prompted scrutiny of accessibility in American cinemas. In October, AMC announced that open caption screenings would be available at 240 locations across the U.S. in more than 100 markets in the country. “A real advance for those with hearing difficulties or where English is a second language. And right in time for Eternals from @Disney,” AMC CEO Adam Aron tweeted. IMAX’s Tu said that while he is thrilled to see the progress, there is still work to be done. “There’s no reason why the 15+ million adults in the U.S. with a hearing disability should be limited in choice and accessibility,” he says.

“The United Nations has made it clear that peoples with disabilities are to have equal participation in cultural life,” says Murray. Article 30 of the UN’s Convention on the Rights of Persons with Disabilities includes guidelines for how countries can take part in enabling access to recreational, leisure and sporting activities. “It is high time deaf Americans are able to have the same cinematic experience as everyone else.” 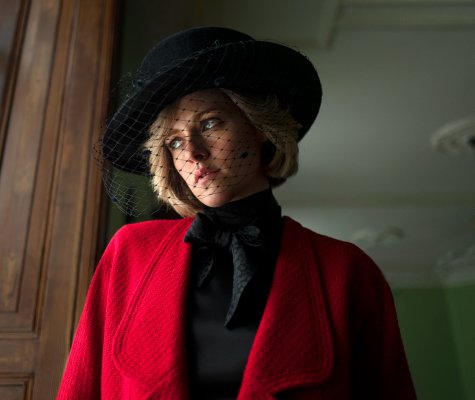 The True Story Behind Spencer—And What It Can Tell Us About Princess Diana
Next Up: Editor's Pick