Veterans Affairs Secretary Denis McDonough, a top adviser to then-candidate Barack Obama and later his White House chief of staff, knows Washington well enough to know that Veterans Day is no time to practice politics. When NBC News’ Courtney Kube asked him in an interview that published yesterday about right-wing radicalization among veterans, McDonough pivoted to the need to make sure those who served had “the information, access to care, benefits, services that they’ve earned” and “access to good sources of information that they need.” When asked about a COVID-19 vaccine mandate superseding religious exemptions for his massive workforce, he said he was “not gonna rush to the end of the story here.”

But he did inadvertently remind his fellow Democrats of information that may prove useful as they prepare for next year’s midterms. McDonough has previously acknowledged that the VA saw an increased demand for mental-health services after images of Afghanistan’s collapse triggered veterans, even those who did not serve in that war. The decision to withdraw U.S. forces from the country—and the ensuing chaos—had echoes of Vietnam for many veterans and civilians alike.“We had a 7% increase in the number of calls, texts, chats into what we call the Veteran Crisis Line,” McDonough told Kube.

The Washington Examiner crunched the numbers back in August and found there were 35,000 calls to the VA’s suicide-prevention line during the two weeks it took the Taliban to take over Afghanistan. Almost 2,600 people called the day Kabul fell.

So why should Democrats care about this?

President Joe Biden ordered the withdrawal of the troops, using power he enjoys thanks to a slow and stealth shift among younger military members and veterans toward the Democratic Party. They comprise an often overlooked voting bloc, but it’s a powerful one that is smart for strategists to consider. If veterans are having a mental health crisis because of Biden’s decision, that’s something he and fellow Democrats are going to have to weigh.

Seven percent may sound like a small figure. But then you have to remember that’s on top of the already huge number of Americans who are served by the VA, a massive organization that employs more than 412,000 people to run 1,700 healthcare facilities. (For a comparison, consider that the Department of Justice employs 115,000 to run the FBI, AFT and DEA, while also prosecuting all federal cases.) While only about one-in-10 Americans are veterans, that still means there’s a 19 million-person bloc of Americans who served in uniform. That makes their lifetime healthcare partner, the VA, a pretty good window into their mood.

And it’s not like the VA has a sterling reputation; it’s the third least-popular federal agency on Pew’s annual survey of government organs. A separate Pew survey found that roughly half of veterans say the VA does a fair or poor job of meeting their needs. So that 7% is probably low, reflecting those who relented and sought help from an agency that has been notorious for its shortcomings.

Polls heading into last year’s elections showed Biden leading then-President Donald Trump among active-duty servicemembers. Trump’s unpopularity among military members had grown during his tenure from 37% holding an unfavorable view of the then-Commander in Chief to 50% by the pre-election period. Among all veterans, the same pollsters found Trump with an advantage. But among veterans under the age of 55, Biden was their pick. All this worked together to help Biden to improve by 10 percentage points Democrats’ standing with veterans between 2016 and 2020, according to exit polls. Trump still prevailed among veterans, but he saw support drop from 60% to 54%.

The twin inroads among active and retired military members was seen as a good sign for Democrats. Core competency has its appeal for those who rely on centralized health sites for their care. Compared with 2012, when TIME’s Mark Thompson reported that the uniform was widely seen as the realm of the GOP, the change could mark a realignment of the Pentagon, bases and ships that matches the broader shift in demographics.

Then, Biden OK’d the withdrawal from Afghanistan. That decision—whose fallout for veterans was embodied in the statistic McDonough invoked—explains why Republicans are not yet ready to write off the reliable bloc. While a narrow majority of veterans support Biden’s decision, they also say the President handled it “poorly or fairly” by an overwhelming 3-to-1 margin, according to Pew. Even among Democratic veterans and those who lean Democratic, 51% believe Biden made mistakes there.

So, when Biden marks Veterans Day, it’s worth noting how those in uniform and those at the VFW halls are feeling about the Administration right now. It may tell us a lot about how those servicemembers will weigh in next year. 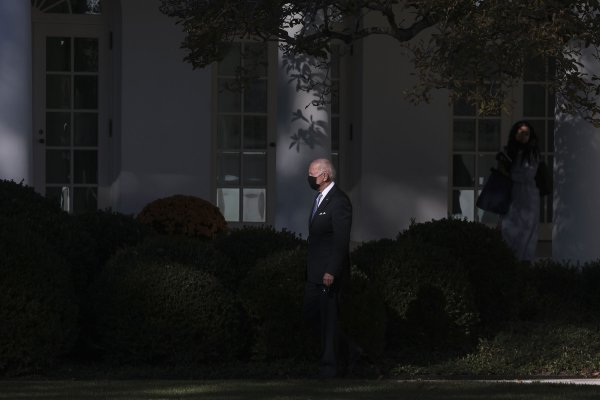 How Democrats Bungled Their Big Win on Infrastructure
Next Up: Editor's Pick