The Day I Passed for White

Illustration By Elizabeth Montero for TIME
Ideas
By Kelly McWilliams
Kelly McWilliams is the author of the upcoming Mirror Girls, a novel about sisterhood and passing.

As a light-skinned Black woman, I have purposefully passed for white only once in my life.

Which is not to say I haven’t passed unintentionally many times—especially as a young adult, away from home for the first time. When white folks around me vented their subterranean racism (“Black kids only get into college because of affirmative action, you know”), I liked to consider myself a warrior—a masked superspy. I always pushed back against this covert racism—the off-color jokes, the insider whispers. (“I would never date a Black man, they’re all on drugs.” “My roommate’s hair smells, you know, like them.”) Importantly, I always revealed my own racial identity as quickly as possible.

Read More: Americans Have Learned to Talk About Racial Inequality. But They’ve Done So Little to Solve It

In the not-too-distant past, people who looked like me passed in order to survive in a racist land. With their light skin, they skirted Jim Crow’s segregation, built wealth they couldn’t have accessed otherwise and escaped the life-or-death consequences of being Black in America. But for that devil’s bargain, they paid a heavy price. They lost access to their Black communities, and forsook the powerful heritage that has helped us, as a people, to endure.

Those times are not now, however; yesterday is not today.

Or so I once believed.

It has always been important to me to practice anti-passing, to fight the intimate battles that a white-passing person can, because I benefit so immensely, and so unfairly, from the privilege of my racial ambiguity. When most people look at me, they see only whiteness, or something close enough for government work. (Although my Netflix algorithm apparently knows what’s up.) I don’t experience the daily slights that raise Black women’s blood pressure and shorten our lives. When I walk into a store, no one follows me. If a cop pulls me over, I probably won’t die. Casual, everyday racism doesn’t generally threaten my life.

But then I went to give birth—and a chasm opened beneath my feet.

In a dim hospital room, while I waited to be induced, a nurse presented me with an intake form, complete with those stupid checkboxes asking about your race.

To my shock, I froze.

Without thinking it through, I marked myself white.

It happened so quickly—an instinct, an atavistic reflex—and in the years since, I’ve tried to untangle the threads. To understand why.

Read More: I Was Pregnant and in Crisis. All the Doctors and Nurses Saw Was an Incompetent Black Woman

There’s an oft-repeated story in my family: On the day I was born, my Black mother nearly lost me. While she recovered from her C-section, a nurse disappeared with me, a light-skinned girl, into the bowels of the hospital. When she returned, she placed a Black child, a boy, in my mother’s arms. (Because Black goes with Black, right? You can always tell who’s Black and who’s not. Right?) My mother badly injured herself dashing into the hall, hollering, in terror and rage, for help.

I heard this story so many times that it seeped into my bones. Three decades later, in a different hospital, fear struck like a sledgehammer: If my daughter came out darker than me, would she be taken away? Due to institutional negligence, Black women die disproportionately in childbirth. (“She’s lying, she just wants more painkillers.”) If the staff learned of my Blackness, could my medical care be subpar? Might my daughter lose me? In all likelihood, none of these things would’ve happened, but it’s so difficult, in a human moment of anxiety and pain, to tell the past from the present. It all bleeds together, because it was never separate. The past, as they say, isn’t even past. For Black people, with chattel slavery behind us, that’s a powerful truth.

All my life, people have tried to separate my family members, because our colors don’t match. My obviously Black brother couldn’t be my real brother, an elementary-school teacher insisted—giving him nightmares for weeks. Surely, my Black mother was actually my nanny. My brother, walking with my white father, had to be adopted.

I used to worry about police officers taking my brother away from me while I watched him at the playground. I used to ache for more melanated skin, so I could be seen for the daughter and sister that I am.

Being Black in America means that terror can, at any time, bubble up from the deep—history’s bearing on today is heavy, persistent and chainlike. Hundreds of years ago, Black children were routinely separated from their parents, and our souls remember this. Our bodies remember the brutality of our past—especially when we are afraid, and especially when we are dealing with an institution (a hospital, a school, a police station) that continues to perpetuate systemic racism. This is intergenerational trauma, and it comes for light and dark alike.

In the hospital, the night before my daughter’s birth, fear came for me. And so, in the immediate aftermath, did the shame.

Handing over the form that designated me a “white” mother, a wave of grief swamped me. Black people have survived for so long because of our fierce, rebellious pride. Giving up the very spirit that’s carried you through a racist world, even for a second, is a devastating loss. People say, Passing is a sin, but I’d never truly understood until that day. My sole act of intentional passing didn’t last long—on my daughter’s birth certificate, I truthfully recorded my race—but it was still the kind of thing that threatens your sense of self, your reflection in the bathroom mirror.

Read More: My Father’s Life Was Shaped by Racism. So Was His Death

And yet, every act of passing also illuminates greater social truths. This is why we continue to write novels about passing, and make movies, too. While I have cousins who spent their childhood trying to lighten their skin with lemon juice, I also have relatives who totally shed their Black birthright, silently disappearing into a snowy white world. From this, we must understand that being Black in America is still a dangerous business—and those dangers are myriad and deep. Passing might be a sin, but when the terror is so old and so strong, isn’t it an understandable one?

In my own case, I’m not so sure. My skin and my soul don’t, and never will, match. I’ll be reckoning with that, in some way or another, until the day I die. But I do hope, at least, for the sake of my mental health, that I will never pass for white again.

We often congratulate ourselves on how far we’ve come in this country, but I am not writing to you from the 1920s, as Nella Larsen, the author of the seminal novel Passing, was. I’m telling a shameful story about my Black life today.

It should shock every one us—as once, in a hospital bed, it shocked me—that even now, in the 21st century, the reasons Black Americans pass for white remain bloody, bright and alive. 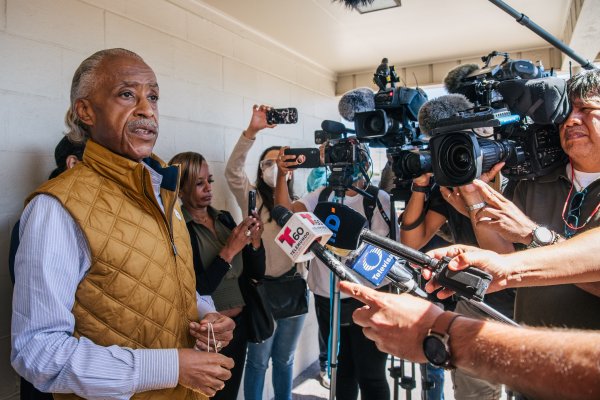 Defense Attorney: 'We Don't Want Any More Black Pastors' in Court for Trial Over Death of Ahmaud Arbery
Next Up: Editor's Pick