Gary Sinise: So Many Veterans Feel Forgotten. Here’s How You Can Honor Them

In 1954, President Dwight D. Eisenhower and Secretary of State John Foster Dulles signed Presidential Proclamation 3071, calling on citizens to observe Thursday, Nov. 11, 1954 as Veterans Day. What had been Armistice Day since 1918 and the end of hostilities in WWI, officially became America’s Veterans Day—a special day to honor “all those who fought so valiantly, on the seas, in the air, and on foreign shores, to preserve our heritage of freedom.”

After playing Lieutenant Dan Taylor in the 1994 film Forrest Gump with Tom Hanks, I found that I shared an important connection to these brave men and women. The character was a proud soldier whose ancestors had died in every war in United States history, and he was defined by his dedication to his country. As someone with Vietnam veterans in my family, I remember all too well what it was like for them to serve in combat and then come home to a nation that had turned its back on them because of the unpopular war they had served in. Many felt forgotten and disappeared into the shadows. This experience was reflected in the film, and the role became a catalyst for my work as an advocate for the veteran community.

In 2003 I began volunteering for the USO, traveling to Iraq, Kuwait, Germany, Italy and back to Iraq a second time that year. It was a way that I could support my country by supporting those who were willing to fight back after the terrible attacks of Sept. 11, 2001. Reaching out to various military and veterans nonprofits to offer support, raising funds and awareness became a way for me to make a difference and reach more of our nation’s veterans. Just wanting them to know they were not forgotten became a full-time mission. A mission that has continued to this day.

This post 9/11 period has been the longest armed conflict in our nation’s history, 20 years of sacrifice in Afghanistan alone. Yet the bravery of our active-duty service men and women can easily be forgotten as they, our veterans, and the families who stand alongside them aren’t regularly in the spotlight. We are also facing very serious mental health challenges within the veteran community. They willingly go into dark and dangerous places around the world and upon returning home often struggle with the psychological effects of what they’ve seen long after they’ve returned to civilian life. And it’s not only the veteran who is affected, but also that of their families.

With that in mind, it’s important to remember that there are many ways we can honor the men and women who have served our nation in uniform. Government can only do so much. And while it is critically important, we should not depend on the government to solve all the problems and challenges facing some of the nearly 20 million veterans in the U.S. I am often asked how people can help and I always encourage them to start as I did, looking within my own family and my own community. I’ve learned over the many years that just showing up with an appreciative handshake or pat on the back can make a big difference.

Visit a veteran living in the local VA, as so many are lonely and can be forgotten, or perhaps there is a family in your community that is taking care of a disabled veteran who might need some help. I’ve made it a special tradition when seeing service members or veterans dining in a restaurant (they often wear hats with their branch of service written on it) to anonymously pick up their check and leave a message of thanks to them. Just taking the time to let our veterans know that what they have sacrificed in service to our country matters to you will make a positive impact.

There is only a very small percentage of our population who defend us all. As private citizens, I believe we have an important role to play in supporting our veterans, as we are the beneficiaries of the freedom they fought to protect. If we don’t support them, why should we expect anyone to continue to volunteer to serve? It’s imperative that we care for them before, during and after the battle.

As a public figure, over the many years I have tried to find ways to shine a light on their needs. I’ve visited hospitals and military bases, performed with my Lt. Dan Band in war zones, at military bases and hospitals across the country. I have met the most extraordinary and selfless people who have served or are currently serving, and it is because of them that I created the Gary Sinise Foundation to expand my efforts to help. It has become a life mission for me, and I feel blessed that we have earned the trust of thousands of fellow citizens who support us and our many programs.

Very simply, if every citizen in every neighborhood in every town and city in every state would make it a priority to celebrate veterans each day by seeking out those who may be in need of assistance because of their service and stepping up to support them, the difficult issues and challenges facing our veterans would be greatly reduced.

To all our veterans this Veterans Day holiday, thank you. 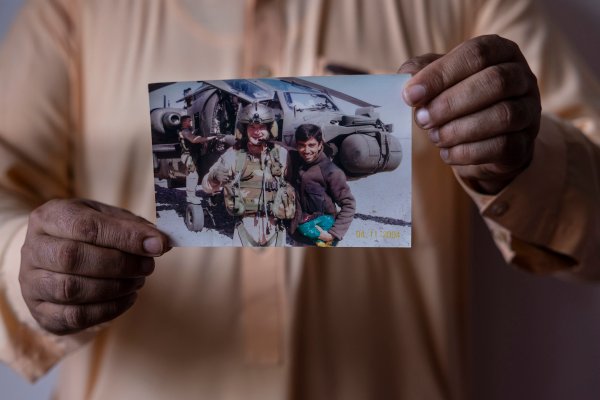 This Veterans Day, Remember to Salute Our Afghan Allies Too
Next Up: Editor's Pick