The Rate of Successful Asylum Cases Shot Up This Year. But That's Probably Not Due to Biden

A migrant woman receives her bus ticket before boarding a Greyhound bus in Del Rio, Texas on September 22, 2021. Thousands of immigrants, mostly from Haiti, seeking asylum have crossed the Rio Grande into the United States.
Getty Images
By Jasmine Aguilera

There’s been a significant uptick in the rate at which immigrants have been granted asylum since President Joe Biden took office, new research shows. But that likely has nothing to do with the new President’s policies.

Asylum case success rates jumped from 29% to 37% between Fiscal year 2020 and Fiscal Year 2021, during which Biden took office, according to a new report published Wednesday by the Transactional Records Access Clearinghouse (TRAC), a data and research organization at Syracuse University. Looking only at the period Biden has been in office, the success rate has been 40% — and as high as 47% in September.

“The obvious inference is, oh, well this is because of Biden,” says Austin Kocher, assistant professor and researcher at TRAC. But, he notes, the Biden Administration has made no major policy changes that would influence how immigration judges rule in asylum cases.

Instead, Kocher says, the higher rate of asylum grants may be due to a confluence of factors. For example, more asylum seekers this past year have had legal representation — and, historically, having a lawyer significantly increases the odds of winning asylum. (The reason for the uptick in legal representation is unclear. One possibility, the researchers say, is that attorneys representing clients with particularly strong cases may have simply succeeded in pushing their cases to the front of the line.)

Another factor may be the nationality of the people whose cases were heard. For example, Chinese applicants have more frequently won asylum cases in the past, while Haitian or Central American nationals have had lower success rates. “The country that people are from goes a long way in determining who gets asylum,” Kocher says. Geopolitics and U.S. foreign policy goals have historically played a big role in shaping asylum decisions.

The absolute number of people being granted asylum remains low, largely because courts have yet to resume their pre-pandemic decision rates after COVID-19 shut down some court activity. “The immigration courts have absolutely not recovered at all, not even a fraction really,” Kocher says. “We still have only had barely more than than 2,000 cases completed a month even right up until the end of September [2021].”

Immigrants Waiting Years for a Decision

Immigration courts are roughly 1.5 million cases behind schedule, which means thousands of people have been waiting for years for their asylum requests to be decided by a judge.

Read more: 5 Things to Know About the Asylum Process and How It Works

In Fiscal Year 2021, which ended in September, just over 23,800 asylum cases were decided in court. That’s down from 60,000 cases that were decided in Fiscal Year 2020. Roughly 8,350 people won their asylum claim in FY21, about half the number of people who won their claims in FY20, according to TRAC, which analyzed data it received through a Freedom of Information Act Request.

An additional 400 people won some type of relief from deportation in FY21 that was not asylum, the researchers note.

In the meantime, asylum seekers will likely have to continue to endure long waiting periods before their cases are heard in court. Prior to the pandemic it was not uncommon for people to wait up to four years for a case to be heard.

“The key thing here in terms of what’s driving a lot of the data is really getting past the pandemic,” Kocher says. “Until the immigration courts are fully open, and society is fully back to normal there’s just no way that the courts are ever going to be able to really get through these cases.” 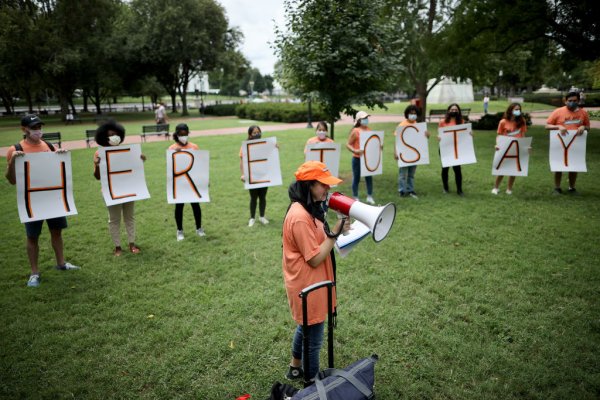 Undocumented Immigrants Are Now Mostly Protected From Arrest at Homeless Shelters, Playgrounds and Vaccination Sites. But It's Still Hard to Feel Safe
Next Up: Editor's Pick